Watch this video of an armed, drunk, disobedient white man -- and his encounter with the cops. Something seem odd? 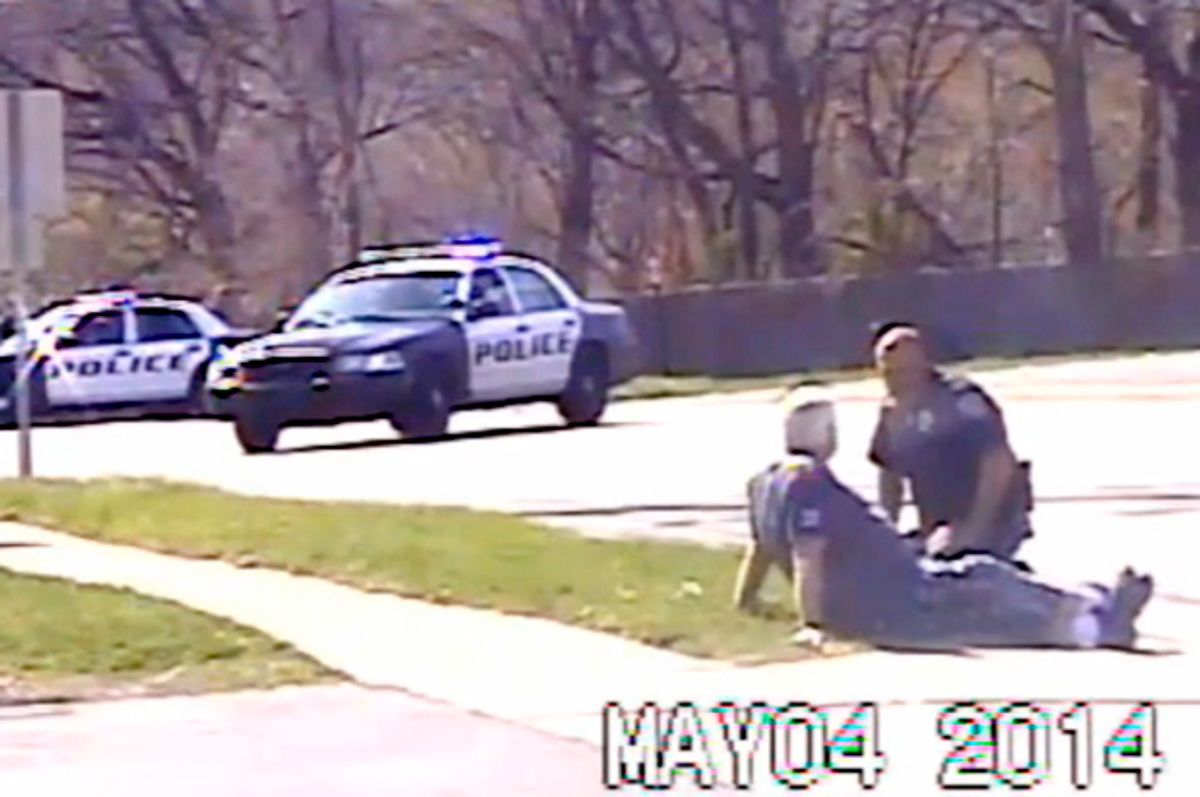 What do you suppose would happen to an agitated, belligerent African-American man wandering around on the street in his pajamas yelling at people, waving a gun around and telling police to shoot him? Judging from what we saw happen in St Louis to Kajieme Powell, he would likely be shot dead by police almost immediately. But that's not what happened to this gentleman in Kalamazoo, Michigan. In fact, what happened in Kalamazoo was a picture-perfect example of smart, strategic policing to deescalate a possibly lethal situation.

Of course, the perpetrator was a white, 63-year-old "open-carry" advocate who was drunkenly asserting his right to bear arms in the middle of the day -- the very definition of a "good guy with a gun."

Here's what happened. It was a Sunday afternoon about 4 p.m. when Kalamazoo 9-1-1 got several calls from citizens concerned about an intoxicated man with a gun walking around a coin laundry and "stumbling around a little bit and kind of bumping into some stuff" on the street. The police arrived shortly and confronted the man by saying, "Hey, partner, how you doing? Can you set that down real quick and talk to me?" (The officer didn't have his gun drawn.) The armed man refused to set it down. The officer told him that he was jaywalking and was being detained. At that point the officer radioed that the armed man would not drop the weapon. He tells the man again that he just wants to talk to him and says, "You're walking around here scaring people, man."

A second police car arrives at the scene. The man refuses to identify himself and demands to know if he's free to go and the officer says no, that he is resisting and obstructing, a misdemeanor, for jaywalking and failing to identify himself. The man says, "Why don't you fucking shoot me?" The officer gently replies, "I don't want to shoot you; I'm not here to do that."

This back and forth continues, with the man refusing to give up his gun and the cops patiently trying to talk him down from his position. The whole time he's rambling about revolution and accusing the cops of being "gang members." It becomes clear that he has conceived this drunken episode as an "open carry" demonstration. He's proving to the community how important it is that "good guys" be allowed to carry guns on the street to protect themselves.

Soon 12 police are on the scene, including a supervisor and SWAT negotiator. The street is shut down in both directions. Police recordings describe the man as agitated and hostile and although he is holding his gun at "parade rest" he's switching it back and forth and fumbling in his pockets for chewing tobacco. After much discussion, he finally agrees to give up the weapon.

Do the police then instantly swarm him and wrestle him to the ground? Do they handcuff him, throw him in the back of the police car and arrest him for the trouble he's caused? Did he get roughed up or put in a chokehold for resisting arrest and being uncooperative?

None of that happened to this man. The police took his gun and then said he could have it back immediately if he agreed to take a breathalyzer test on the spot. (You can be arrested for carrying a firearm while intoxicated in Michigan if you blow a .08 or above, the same legal limit for DUI.) The man refused. They carried on for a while longer with the man objecting to having his gun taken away even as the police explain that he is free to walk home and retrieve it at the police station the next day. They spar over whether he's mentally unstable and if it's a good idea for him to "demonstrate" this way, particularly being hostile to the police. He finally apologizes and leaves the scene without his gun. No charges were filed. Nobody was hurt. He got his gun back.

That's very different from what happened to Kaijame Powell, the young black man from St. Louis with mental problems. A shop owner called the police to report a shoplifter and said he had a knife. The man walks around on the sidewalk in an agitated fashion. A few minutes later a police car races up the street and stops at the curb in front of him, two officers jump out with guns drawn shouting, "Put down the knife!" He says, "Shoot me, shoot me," and he walks toward the car and they fire their guns, killing him on the spot. The whole altercation took 30 seconds. The St. Louis police chief said that the video of the incident was "exculpatory" and explained that the officers could not have done anything different (like use the tasers they carried on their belt) because nothing else was "guaranteed" to stop the victim.

Just a few days before that another African-American man named John Crawford was shopping in an Ohio Wal-Mart while talking to his wife on the phone. He'd picked up a BB gun the store sells and apparently some patrons were afraid and called police. The wife heard the cops order him to put down the weapon and he immediately shouted, "It's not real." Then they opened fire and killed him. (Another shopper collapsed and died as she tried to get away from the gunfire.) Crawford had two young children and a third on the way.

Many people have wondered how one is supposed to know which people carrying guns in public are "good guys" who just want to defend the Constitution and which ones are the "bad guys" who are dangerous. Evidently, one way that some people tell the difference is by the color of their skin. A drunk white man wandering around with a gun, spouting gibberish, leads the police to be patient and considerate since he's obviously just exercising his Second Amendment right to bear arms and just needs to be talked down and counseled a bit. If it's an agitated young black man with a knife he's clearly trying to kill someone and the police need to kill him first.

The first method is the proper one. Those Michigan police followed the law and they used common sense. The man wasn't trying to kill anyone, but he was drunk, angry and potentially dangerous. They could easily have escalated that situation into something tragic. But they took their time and whether you agree that the man should have been arrested or not, one thing is sure: In the end everyone went home alive and in one piece.

Unfortunately, the police in Missouri and Ohio shot first and asked questions later and two young men are dead when they didn't have to be. It's very hard not to conclude that if they looked more like that man in Michigan, they would have had a much better chance of surviving.