The drama seems paint-by-numbers, a last-ditch attempt to reverse-engineer prestige 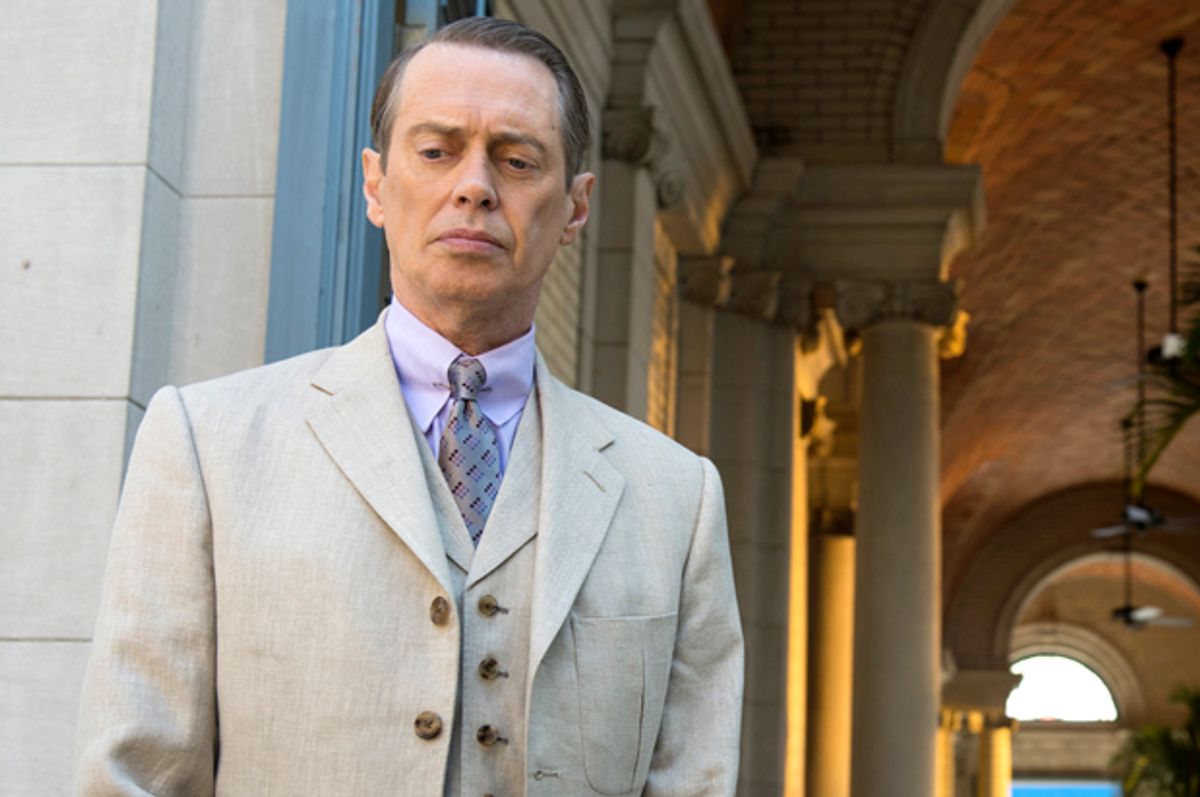 The final season of "Boardwalk Empire," which debuts Sunday night, represents the end of an era for HBO.

The pay-cable network spent years in the creative wilderness, perfectly characterized in 2007 by the fact that the end of "The Sopranos" led into the first moments of "John From Cincinnati." A network that had stood astride the TV industry colossus seemed not merely aimless -- with the dopey surfer-chic "John," the good but second-tier "Big Love," the audacious but too-demanding "In Treatment" -- but, by comparison to the rest of the dial, humbled. AMC had picked up a show HBO rejected, "Mad Men," but it and other networks had also capitalized on HBO's hits, making formally interesting and thematically edgy shows about complicated people while the onetime king of the hill muddled along.

That's where we get to "Boardwalk." Around 2009, HBO made the decision to double down on particular aspects of what had traditionally made successful TV: Quality names and themes that were unimpeachable. Thus we got "Luck," the late horse-racing drama from David Milch; David Simon's much-admired but little-loved "Treme"; and "Boardwalk Empire." The Prohibition-era drama, created by former "Sopranos" writer Terence Winter, and informed by the visual sensibility of executive producer Martin Scorsese, is easy to praise and is clearly put together by extremely talented people. But in the first three episodes of its final season, it seems paint-by-numbers, a last-ditch attempt to reverse-engineer prestige.

The first three episodes of the fifth season only occasionally manage to accomplish what the show has historically done so well: depict the endless weirdness or the boundless ambition that defines American life. (A set piece in a women's asylum, which really has very little to do with the main action of the show, is breathtaking.) And the material is interesting enough. Nucky Thompson, played by Steve Buscemi, strikes a deal to sell Bacardi rum after Prohibition ends--relying on the presumption that Prohibition will indeed end soon--was, as a plot engine, enough to keep me engaged. So were Thompson's attempts to go legit after years of crime, a familiar enough theme that the plot line basically managed to run on its own rails.

That's really the problem: The themes the show hits at are unrewardingly obvious. An extended cameo by a real-life political figure feels like an elbow to the ribs. Entire conversations exist for the sole purpose of providing exposition or for conveying, again and again, ideas like "family history can be restrictive" or "those who face discrimination often have to work harder." Flashbacks to central character Nucky Thompson's deprived childhood feel like they solve no puzzle aside from how to take up time on an hourlong drama; similar flashbacks on "Mad Men" deepen the mystery of Don Draper, but on "Boardwalk Empire" they answer questions the audience wasn't even asking, ensuring that there's no enigma worth pondering at all.

In short, every box is checked. A good show -- a prestige show -- gives characters a backstory, and that's why the flashbacks are there. There's nothing wrong with the early going of "Boardwalk Empire" season 5 (nothing aside from a languorous side plot in one episode about a home invasion).

But you can say this for the shows a few months to a few years younger than "Boardwalk Empire" -- they are the best they can possibly be, because they are fully committed to their sensibility of choice. "Game of Thrones" is the epitome of high-fantasy TV serial; "True Detective" is hugely, even indulgently original; "The Leftovers," which I cannot stand, expresses its ideas in a challenging and idiosyncratic manner, at least. "Boardwalk Empire" is likable but not lovable, or, it feels at this point, much loved. Like one of the ambitious, glassy, empty Atlantic City casinos that went up a few years ago only to close down, it relies on an idea of glamour and craftsmanship without nailing the details, or realizing the culture has moved on from being dazzled and wants instead to be entertained.