He was losing his memory. I was in love with a memory. The path we forged together meant living in the present 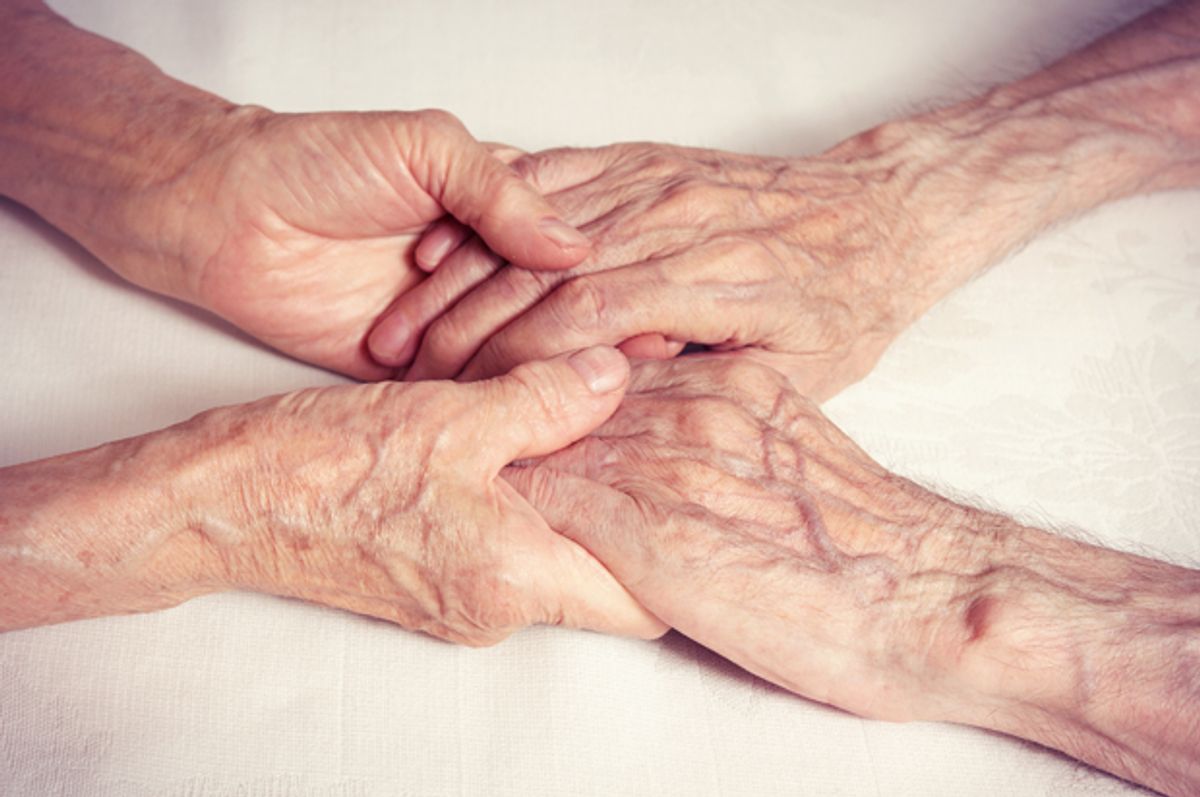 I’d found David’s eyeglasses. Now he was searching for his wallet. We were preparing to leave the house and drive to the Adler Geriatric Center in New Haven for another periodic check-up as we monitored the progression of David’s memory loss. We didn’t call it by its probable name: Alzheimer’s. There are many ways to deal with denial, tact perhaps the gentlest.

I’d noticed that David had left a book bag by the door — that it bulged, looked weighty. He’d seen me noticing, and his body language translated Don’t ask. But while he was looking for the mislaid wallet, I unzipped the bag. There inside were all the books he had edited or written and a heavy brass and wooden plaque that named him for excellence in teaching at the University of Connecticut in 1983.

He was taking this, as evidence, to the doctor. These were his accomplishments; this was his brain in a book bag, and the only way to measure his intelligence. No more silly questions, thank you. No more drawing clocks, no counting backwards from a hundred by seven. As he’d snapped once, “Give me a real question.”

In his years of clarity David had been a man who took “know thyself” seriously. A man who respected the teachings of the Buddha but only sporadically practiced meditation. Face to face with the sorrow and fear Alzheimer’s engenders, what caregiver, holding the book bag, would take away any strategy of brave continuance? Never mind that he took the bag to the doctor’s but never opened it — I don’t know why.

Living with Alzheimer’s is, for the one who has it and for the caregiver, a process of “ living without the why.” I’m grateful therefore that I encountered and practiced meditation — more precisely zazen — long before David’s illness. In the little anecdote of the book-bag, one can detect what Buddhism calls the three prime marks of existence: suffering, impermanence, and no permanent (or separate) self. Basically zazen asks us to put down the heavy book bag in favor of being present here and now. “Moment by moment, breath by breath,” as my Zen teacher Peter Matthiessen said, at times gently, then again with an inflection that combined admonition, affection and respect.

Once in the zendo, during kin-hin, a period of walking meditation that follows the longer period of zazen, an older woman a little ahead of me in the line lost her balance and tumbled, grabbing her ankle and crying out. Without thinking about it, I ignored Zen etiquette and ritual and broke my place in line, kneeling beside her and putting my hand on the painful leg. That’s when I understood what Roshi had meant by no separation, by one body. The right hand suffers a scratch, the left hand moves to hold the injured other hand. It doesn’t think; it isn’t separate.

Becoming a caregiver is living the fact that the other is no other than myself. It is taking the Bodhisattva vow to alleviate suffering. If this is so, then Alzheimer’s is a zany, crazy-cloud Roshi. Don’t-know mind is putting it mildly. But if you can practice some of the skills and renunciations learned in sitting meditation, things go better moment by moment, breath by breath.

David turns into the lane of oncoming traffic? Being Present grabs the wheel. He puts on his leather shoes in the middle of the night and wears them back to bed? Being Present thinks it's funny. He moves the paintings and other things in the house, shifting them from room to room? After some frustration and resistance, Being Present recognizes her own fear of change and makes peace with it. Your husband sits down in the kitchen chair and bursts into tears, no apparent reason? Being Present sits in his lap and weeps with him. He talks and talks word salad, and you can’t tell a radish from a carrot? Being Present listens, follows the rhythm, rides the currents of feeling, and waits for the clarifying sentence to emerge (or not): “I don’t understand my body.” “ I’m just a little boy.” Or, “I used to remember who I am.”

You learn to mirror the behavior you want in the other; you learn to reframe, redirect. David refuses to undress for bed? Being Present walks up close, looks into his eyes, and smiles. His stubborn will . . . where does it go? He smiles back. It’s a little like the way he used to start singing the old Protestant hymn “Trust and Obey” when the two of us were squared off against each other. I’d laugh, and the standoff would shift into something more tractable.

Not that I do any of this perfectly. Compassionate presence can easily tip into hypervigilance and exhaustion. I’ve been down that path, too.

“David’s lost his memory, and I’m in love with one,” I said to a friend in a bad moment. Being Present may remember, and love, the historical David, but the one to love is here, now. I stay clear of the past: no tallying losses, no comparisons.  And I stay clear of the future. Fear cuts the ground out from under the present.

I’m remembering this, but it’s still very present, so I’ll write it in a fictional present. David is sitting on the sofa holding a book. He’s reading; that is, he’s underlining every blessed sentence, page after page. He reads his memoir, more moved by it than when he wrote it. He feels it more keenly, because his beleaguered intellect can’t be a buffer. “Did this happen?” he asks me. He’s as vulnerable as a child.

I’m grateful that this man who forgets that he forgets has a kind heart. He still loves to teach. Listening to Beethoven one morning at breakfast, he looked at me and said: “If you stay with it, you can go with it, and if you go with it, you can take it.” He was smiling and in that moment he was full of acceptance and courage.

It took my breath away.

Margaret Gibson is the author of Broken Cup (September 2014) and The Vigil, which was a finalist for the National Book Award. She can be reached at www.margaretgibsonpoetry.com.