From "Rent" to "Hair," these shows prove no substance is too hard to be turned into a song and dance routine 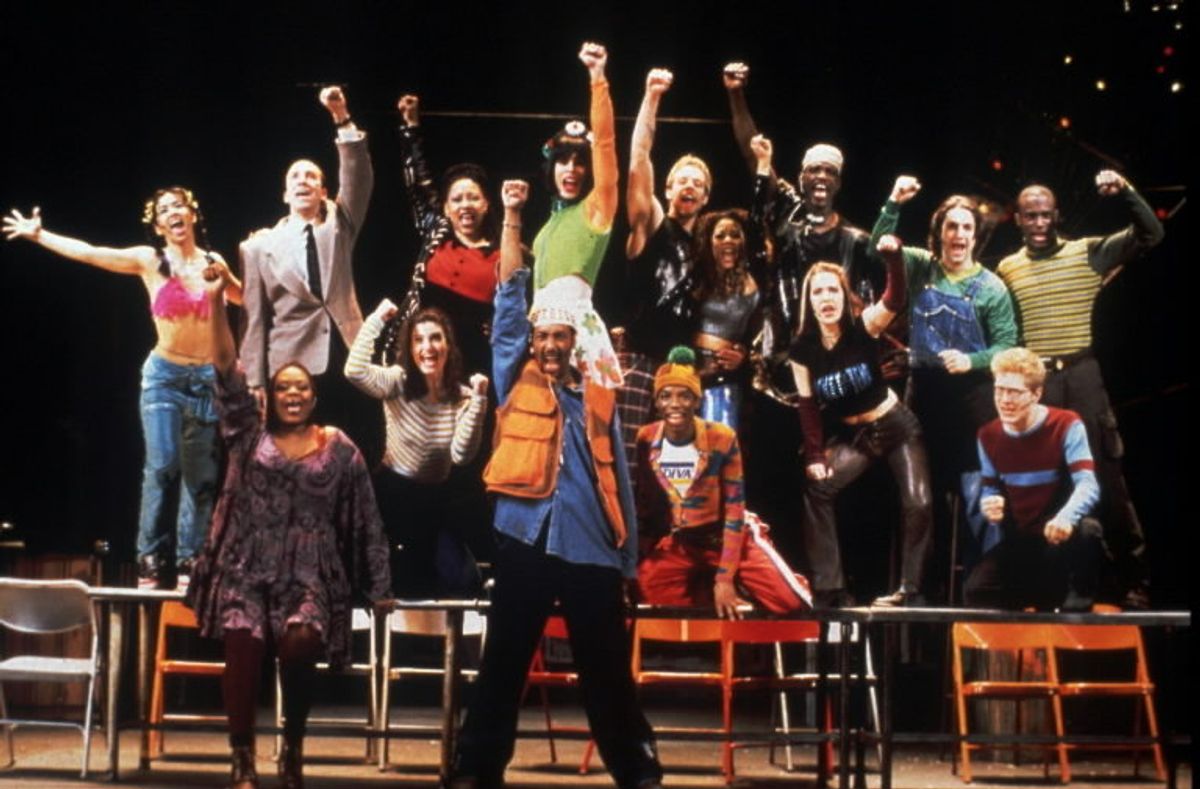 We’ve come to expect films, TV, literature and songs to tackle drug and alcohol use and addiction. But musicals, with their prescribed jollity and often underage audience members, are an improbable medium to tackle such heavy content. Also, the inebriated generally don’t dance a good soft shoe. But as the subject of addiction is no longer taboo—and therefore easier to approach with a little levity—a growing number of intrepid lyricists and directors are going where very few had previously dared. With New York City’s self-promotional “Broadway Week” upon us (September 1 to 14), it seems apt to give props to our 10 favorite substance use musicals.

Jonathan Larson’s groundbreaking 1996 musical followed a group of East Village bohemians as they made art, dealt with AIDS, scored dope and scraped by. The most notable addict is Mimi, an exotic dancer and heroin user who sings about her lost bag in the now-famous number “Light My Candle”: “I’m illin’/I had it when I walked in the door/it was pure!” Mimi fares better than some other cast members, however; in a particularly syrupy finale, she is revived from a nearly comatose state by the sweet crooning of her ex-boyfriend (a former heroin addict). Rent developed an enormous cult following its debut, and is still staged widely, including in a somewhat censored version for schoolchildren to raise their awareness of AIDS and drug use.

What would a musical romp through the ‘60s counterculture be without featuring illicit drug use? In this landmark 1967 musical subtitled “The American Tribal Love-Rock Musical,” hippies take center stage, educating the audience about the new Age of Aquarius value system and the many substances that facilitate it. One of the first numbers, “Hashish,” is essentially a list of drugs from Thorazine to opium. Most of the second act is the staging of an acid trip, during which a monk self-immolates and Abraham Lincoln dances a minuet with Clark Gable and Colonel Custer. While it’s easy to see Hair, with its Be-In finale and occasionally goofy lyrics (“S-E-X Y-O-U W-O-W!), as dated and laughable, its nudity, explicit sex and drug language, a man-on-man kiss and, most notably, its racially integrated cast were groundbreaking at the time.

This 2009 musical by Brian Yorkey and Tom Kitt sets all the pitfalls of suburban life to music. The story revolves around the Goodmans: bipolar wife Diana, depressive but stable husband Dan and overachieving but secretly despairing daughter Natalie. Oh, and there’s also the son, who––spoiler alert!––just happens to be giving the mom medication advice…except, in a Sixth Sense-style twist, he’s dead. Inevitably, psychiatric medications play a big role in this show—they even a round of electroconvulsive therapy is set to music—but illegal substances also make an appearance. In the song “Wish I Were Here,” Natalie greets the specter of her mother with a cheery, “I’m Robotripping!” Next to Normal won 11 Tony Award nominations and snagged the Pulitzer Prize for drama in 2010, one of only 10 musicals to ever do so.

However unlikely at first glance, the troubled life of model Anna Nicole Smith proves to have all the hallmarks required for opera: a hopeful beginning followed by a fatal love affair and a tragic end for the protagonist. The opera premiered in 2011 in Britain to rave reviews, then made its way across the Atlantic to the Brooklyn Academy of Music, where it was panned and soon closed. I know, I know—you thought you’d never see the day when a big-busted soprano dressed in pink taffeta sang an aria called “Partay!” but that day has arrived. “I’m dressed up to get messed up!” sings an intoxicated Smith, who was famously addicted to pills, alcohol and binge eating. Though most of the show is (not always intentionally) hilarious, the conclusion examines the vicious way American society treats celebrities and the deadly would-be panaceas those in the public eye often turn to.

“You know how they say ‘religion is the opiate of the masses?’” asks Carrie Fisher in her one-woman show, Wishful Drinking. “Well, I took masses of opiates religiously.” Although not a musical per se, Fisher’s show, during which she talks frankly about her dysfunctional Hollywood family, opiate addiction and treatment for bipolar disorder, contains a lot of music. It opens with a raspy, ironic version of “Happy Days Are Here Again,” sung by Princess Leia herself—a fitting beginning for Fisher, whose mother, Debbie Reynolds withdrew her from school at age 16 to sing in the chorus of a Broadway musical. New York Times theater critic Ben Brantley called Wishful Drinking a “brut-dry, deeply funny memoir of a show,” and the original production spawned both a book and an HBO documentary.

Who’s tour-de-force Tommy—about a deaf, mute and blind boy who becomes a pinball champion and later spiritual guru—features only one song about drugs, but the entire production serves as a reminder that hardly a soul was sober in the mid-‘70s. Only someone higher than a kite would think to describe the looks of a blind child as “sparkle warm crystalline glances” (“Amazing Journey”) and include a scene in the film version the musical in which a TV projectile-vomits baked beans onto a writhing Ann-Margaret. The song “Acid Queen,” sung in the film by a terrifying Tina Turner, describes how Tommy’s father hooks him up with a dealer-prostitute in hopes that the experience will open his eyes. Even though Hair might hold the title of first rock opera, Tommy made it into a verifiable genre.

Steven Strafford’s riotous one-man show about his three years as a crystal meth addict confirms that there’s no better way to talk about addiction than with jazz hands. Strafford began writing his “one-man musical journey through addiction” (subtitle) after he got sober, imagining that he was channeling the humor of David Sedaris. Indeed, in the revue-style opening number, he explains to the audience that he likes math. “For instance, Tuesday plus crystal meth equals Friday,” he says. Methtacular!, which boasts one of the best addiction musical titles ever, opened in 2012 in New York City and, touring nationwide, ended up in Chicago, where it’s playing through September 23. Strafford finds a redemptive note to this, as he spent most of his addiction in Chicago; the current production is being staged, in fact, at a theater from which he was fired due to bad behavior.

Written by singer-songwriter Marianne Pillsbury, the memoir-musical breakout hit from last month’s annual New York International Fringe Festival was mostly about the eponymous malady, but also includes more than a few nods to Pillsbury’s addictions. “Have you tried binge drinking, over-eating or casual sex?” asks one of the doo-wop background singers during an ad for a fake antidepressant called Perfecta. Throughout the musical, Pillsbury, who plays herself, often mentions her struggles with alcohol and her experiences in AA. After getting sober, she realizes that her melancholy wasn’t entirely due to her drinking and is forced to face her depression head-on. Bummer! One of the catchiest tunes of the pop-rock lot is “Medicated,” which hilariously—and quite aptly—skewers our psychopharmacology-obsessed culture. Depression: The Musical will be back again—and just as saucy—in New York this fall.

Last on our list of favorites is the oldest, a 1930 musical that Cole Porter, one of Broadway’s greatest composers and songwriters, created specifically for Jimmy Durante, the versatile vaudevillian who won enduring stage and screen stardom. This rarely performed gem revolves around a Manhattan socialite and her love affair with the owner of an illegal nightclub during Prohibition, so booze is a major theme. Most memorable of the numerous songs about alcohol is “Say It With Gin,” which advises lovelorn young men to eschew candy and flowers in favor of “Gordon’s and Gilbey’s and High and Dry and Plymouth.”  (That way, the song goes, the object of your affection is “guaranteed” to end up “under the table.”) The New Yorkers, with its gangster anti-heroes and Jazz Age hijinks, provides similar thrills as Guys and Dolls, with the added bonus of some of Porter’s most infectious tunes. It biggest number, “Love for Sale,” even earned the distinction of being banned from radio because it was about prostitution.