"Deporter-in-chief" blows it: Why the president's immigration announcement really burns 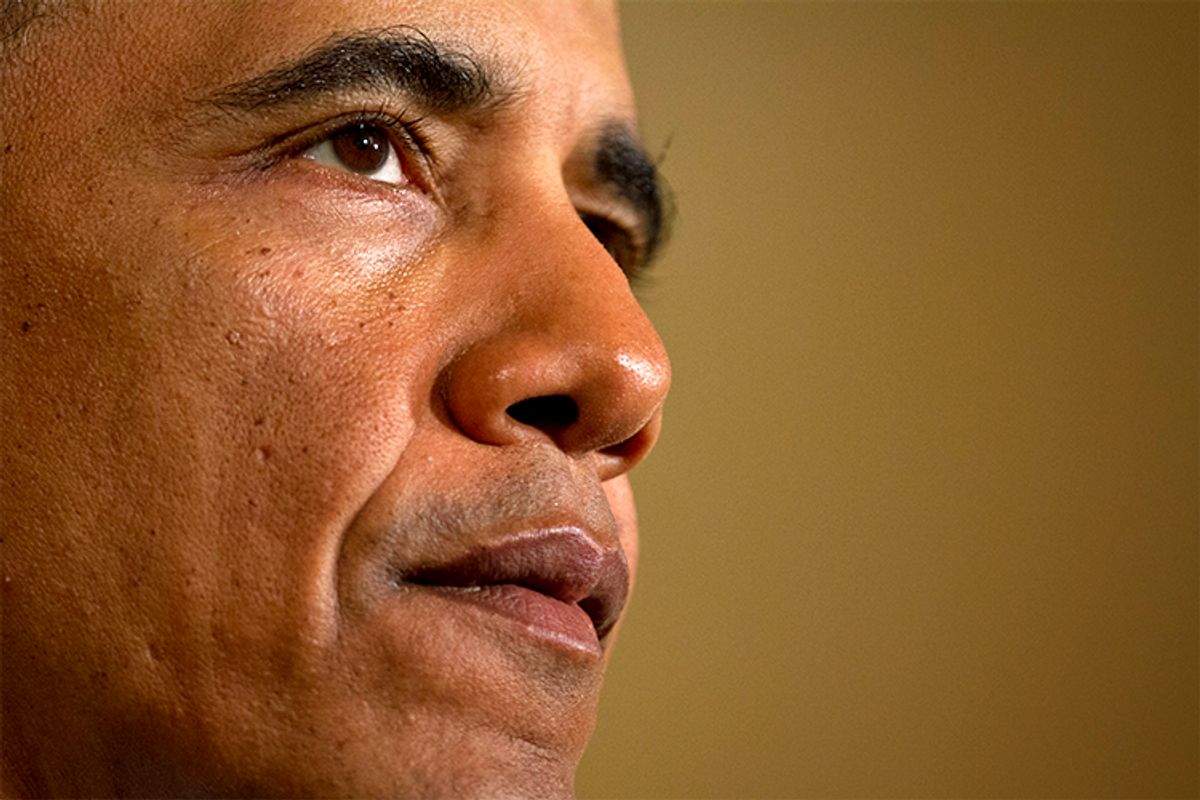 Campaigning for the presidency in 2008, Barack Obama pledged to introduce an immigration-reform bill by the end of his first year in office. Five years past that self-imposed deadline, in June he promised to take action “by the end of summer” to provide deportation relief for millions of undocumented immigrants.

“In the absence of action by Congress, I’m going to do what I can do within the legal constraints of my office — because it’s the right thing to do for the country,” he reiterated at a NATO summit in Wales on Friday.

But back in the U.S. the next day, the White House said it would delay taking action until after the midterms to take pressure off Democrats facing tough reelection bids and avoid roiling Republicans.

“The president believes it would be harmful to the policy itself and to the long-term prospects for comprehensive immigration reform to announce administrative action before the elections,” an administration official said.

Accusing a politician of breaking a promise is a bit like complaining that the water is too wet. It’s the nature of the job: To curry favor with constituents and get elected, you have to commit to doing things you can’t possibly be sure you can deliver on later. Then once it comes time to take action, your big plans are reined in by the realities of governing, which requires collaboration with scores of other people — many opposed to your idea outright — and maneuvering a dizzying obstacle course of rules. The cliché is that politicians “campaign in poetry and govern in prose,” but governing is a lot more like writing a novel that’s sure to bomb.

But Obama’s announcement on immigration over the weekend is dismaying to even the most cynical political observer. With immigration reform stymied by House Republicans, who have failed to act on the Senate immigration-reform bill passed a year ago, the president had committed to using his executive authority to address the estimated 12 million undocumented immigrants currently living in the country. Under the Deferred Action for Childhood Arrivals (DACA) program, Obama had already granted undocumented immigrants brought to the country as minors reprieve from deportation; while the White House has been tight-lipped about what it’s been planning, immigrant-rights advocates expected him to give the rest of the population a similar deal.

Immigrant-rights supporters reacted to the White House’s announcement with fury. “To wait nine more weeks means the president has agreed to deport more than 70,000 people, more than 1,100 every day,” said Cristina Jimenez, managing director for United We Dream, in a statement. “[He] continues cementing his legacy as the Deporter-in-Chief.” Since taking office, Obama has deported undocumented immigrants at record rates — more than 2 million people to date.

At first blush, Obama’s decision makes a certain amount of sense politically. Rather than inspire a humanitarian response, the recent influx of child migrants crossing the border has only made those on the right more hawkish on immigration. In response, not only have House Republicans voted to change the law to speed the deportation of kids fleeing violence in Central America; they’ve voted to repeal DACA, which would mean deporting hundreds of thousands of undocumented kids who’ve lived their entire lives in the country. With the president’s approval ratings in the dumps and Democrats in conservative states like Arkansas and South Carolina facing reelection bids come November, the administration is hoping to keep explosive immigration politics out of the picture.

Cautioning immigrant-rights advocates to lay off the panic button, Simon Rosenberg of the center-left New Democrat Network said he was “sure this was a tough decision, but I think it was the right one.”

“Immigration advocates should be careful to temper their reaction,” he added. “At the end of the day we are talking about a six-week delay on an issue of enormous consequence.”

But as Brian Beutler at the New Republic notes, how much political cover does it provide to delay taking action if everyone knows the president is going to go it alone on immigration as soon as November’s ballots are counted? Fear-mongering cries of “amnesty” will be no less loud whether Obama acts before or after Nov. 4.

As for the greater prospects of comprehensive immigration reform: No one in their right mind thinks Obama is going to succeed in overhauling the immigration system before his presidency runs out. That’s the whole reason he agreed to take matters into his own hands in the first place.

Given how long immigrants have had to wait for any sort of relief from the fear of deportation, another few weeks may seem like no big deal — that is, of course, if you’re not one of the tens of thousands of people who’ll be kicked out of the country while the president waits out the midterms.

But for many immigrant-rights supporters, the delay shows the president doesn’t understand the moral crisis at the heart of the immigration debate, in which those looking to escape poverty get branded as parasites, their children as “anchor babies.” Our dysfunctional immigration system has created a powerless class of millions of people; without the ability to vote or to advocate on behalf of themselves in public, they have no choice but to wait for our politicians to take sympathy. Lawmakers all “play politics,” but extending the suffering of this vulnerable population because it might save you a few votes at the ballot box is yet another sign you don’t fully consider them Americans.