If the only thing causing action is bad PR, it's time for John Harbaugh and Roger Goodell to be PR problems, too 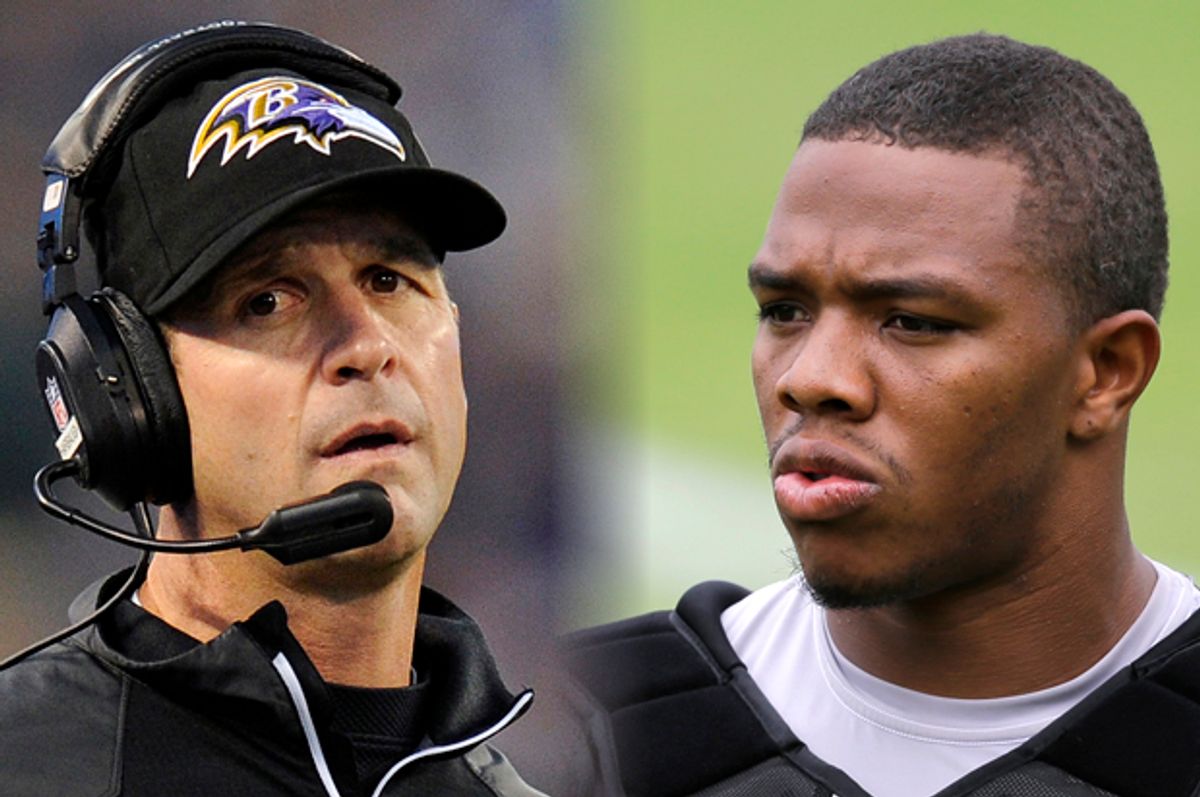 According to a tweet from the official Twitter account for the Baltimore Ravens, the team has terminated running back Ray Rice's contract. Which is strange because prior to the Monday release of footage of Rice knocking his partner unconscious (more on that here), the Ravens seemed to think he was a super guy who was trying to make things right after a "bad incident."

If you don't follow the official Twitter account for the Baltimore Ravens, then you may not know it's the same media team responsible for the (now deleted) tweet that said, "Janay Rice says she deeply regrets the role that she played the night of the incident."

Which is the same media team led by Kevin Byrne, who weighed in on Rice's assault in a 1,200-word essay that never once mentioned the words "domestic violence" but cheerfully declared, "I like Ray Rice a lot today."

Which is a piece he wrote in consultation with team owner Steve Bisciotti, who told Byrne how "sad" he was that Rice had "tarnished his image." Bisciotti is quoted at length in Byrne's piece, in which he bemoaned how people didn't understand the team's decision to stand behind a domestic abuser and remarked, "Don't we all have days or moments or periods in our life we regret?"

Which was more or less what head coach John Harbaugh shrugged after he was asked if Rice would be returning to the field in light of the domestic violence incident, or if he believed a two-game suspension suited the crime of knocking a woman unconscious. "I stand behind Ray," he said. "He’s a heck of a guy. He’s done everything right since. He makes a mistake, alright?"

Harbaugh, like all other NFL employees, works under the leadership of NFL commissioner Roger Goodell, who last month had this to say about Rice:

You know, you have a lot of people voicing their opinions, but I think it's important to understand that this is a young man who made a terrible mistake. [Rice's actions are] inconsistent with what we're all about, and we've dealt with it in a serious manner, and we're very confident that this young man understands where he is and what he needs to do going forward. [...]

I was also very impressed with Ray in the sense that Ray is not only accepting the issue and saying I was wrong, but he is saying I want to make a powerful difference in this area. I think you heard from him yesterday -- he's a young man who really understands the mistake he made, and he's bound and determined to make a difference.

How strange that this "young man who really understands the mistake he made" and is also a "heck of a guy" is now being booted over this "bad incident."

So here's an idea: Maybe we turn the continued employment of John Harbaugh, Kevin Byrne, Steve Bisciotti and Roger Goodell into a media disaster that is costing the franchise money. It seems to get results.