Some police agencies not racially balanced 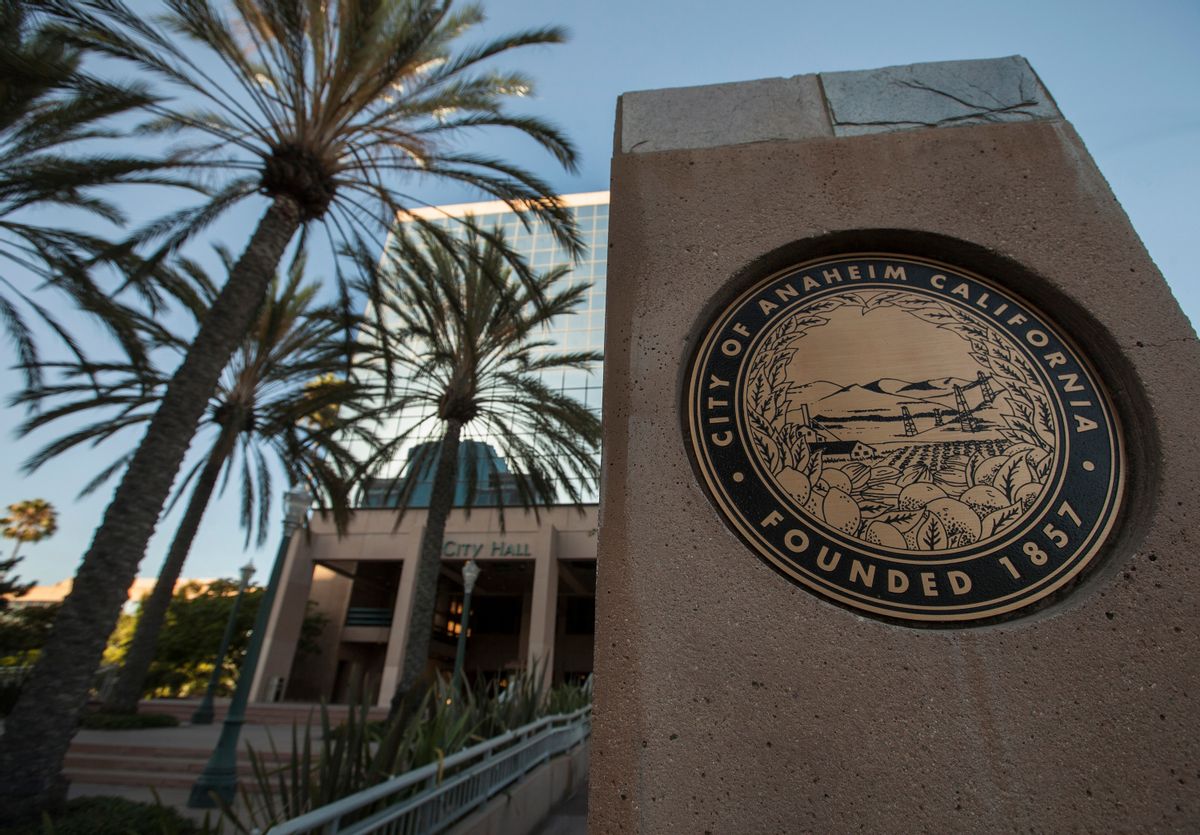 FILE - In this July 25, 2012 file photo, palm trees frame the Anaheim City Hall in Anaheim, Calif. Police maintained a heavy presence on the streets of Anaheim to guard against further violent protests in the wake of the fatal shooting of an unarmed man by officers. The mother of Manuel Diaz condemned the unrest that has roiled the city, saying she did not want them to become her son's legacy. The killing of an unarmed black man by an officer in a nearly all-white police department in suburban St. Louis refocused the country on the racial balance between police forces and the communities they protect. But an analysis by The Associated Press found that the racial gap between black police and the communities where they work has narrowed over the last generation, particularly in departments that were once the least diverse. A much larger disparity now divides the low number of Hispanic officers in police departments. (AP Photo/Damian Dovarganes, File) (AP)
--

An Associated Press analysis of Census Bureau data and Justice Department figures about law enforcement found that Hispanics are more often underrepresented in police departments around the country than are blacks.

Some of the least racially or ethnically balanced police departments:

—Anaheim, California: More than half the community is Hispanic, yet only 23 percent of the police officers are. Theresa Smith, a member of the Anaheim Community Coalition, which aims to improve police oversight, said the city's Hispanic community has made more of an effort to improve relations than the police have, even with the appointment of a Hispanic police chief last year. Smith said not everyone in the community is inclined to call police for help. In February, Anaheim announced it will test a public safety board with nine residents who will review public safety budgets, practices and incidents such as police shootings. Police spokesman Robert Dunn said the department has been making strides in improving relationships with all the city's communities.

—East Haven, Connecticut: Nearly 9 percent of the population is Hispanic, with less than 1 percent of Hispanic officers in the police department. In 2011, the Obama administration found that the department consistently discriminated against Latinos by intentionally targeting them in traffic stops and retaliated against Latinos who complained about discrimination. Marcia Chacon, the Ecuador-born owner of My Country Store in East Haven said the atmosphere has improved dramatically since the abuse scandal that led to the arrest of four local police officers in 2012.

Chacon wasn't concerned that Hispanics are still underrepresented in the police department.

"What's more important is to have police who do not pick on people because of their race," Chacon said.

—Ferguson, Missouri: About 65 percent of the population in the St. Louis suburb is black, while only 11 percent of the police department is, according to 2007 figures from the Justice Department. On Aug. 9, a white police officer shot and killed an unarmed black 18-year-old. Accusations of police discrimination and weeks of rioting followed.

Attorney General Eric Holder on Thursday announced a Justice Department investigation into the practices of the city's police department. Holder said he and his department had heard numerous concerns from people in Ferguson about police practices, a history of "deep mistrust" and a lack of diversity on the police force.

—Providence, Rhode Island: Nearly 40 percent of the population is Hispanic, compared with 11 percent of the police force, according to recent data provided by the department. Sheila Wilhelm, who helps run a community activist group, Direct Action for Rights and Equality, said officers tend to harass participants of Puerto Rican and Dominican festivals.

"You shouldn't have to worry about the look of suspicion from the police because of how you're dressed or because of your skin color," Wilhelm said.

The city's police commissioner, Steven Paré, said he is aware of the complaints from the community, and he encourages people to file specific complaints to the police department. "We take every complaint seriously," he said. "The relationship between the community and the police is critical."

Paré said there have been efforts to recruit more minorities to the police force. The current police academy class has nine Hispanic recruits.

—Waco, Texas: The community is more than 30 percent Hispanic, but in the police department of 231 full-time sworn officers, only 11 percent are Hispanic, according to the department.

—West Valley City, Utah: One-third of the population is Hispanic, yet only 6 percent of the police force was, according to the 2007 figures. In 2013, the Justice Department met with members of the Latino community and police in 2013 to address concerns about Latinos being unfairly targeted in drug cases. "They don't have a lot of Latino police officers," said Tony Yapias, director of the advocacy group, Proyecto Latino de Utah. "That was kind of the problem."