"The message is, take the stairs!": Fox News hosts joke about domestic violence, get a lot of other things wrong 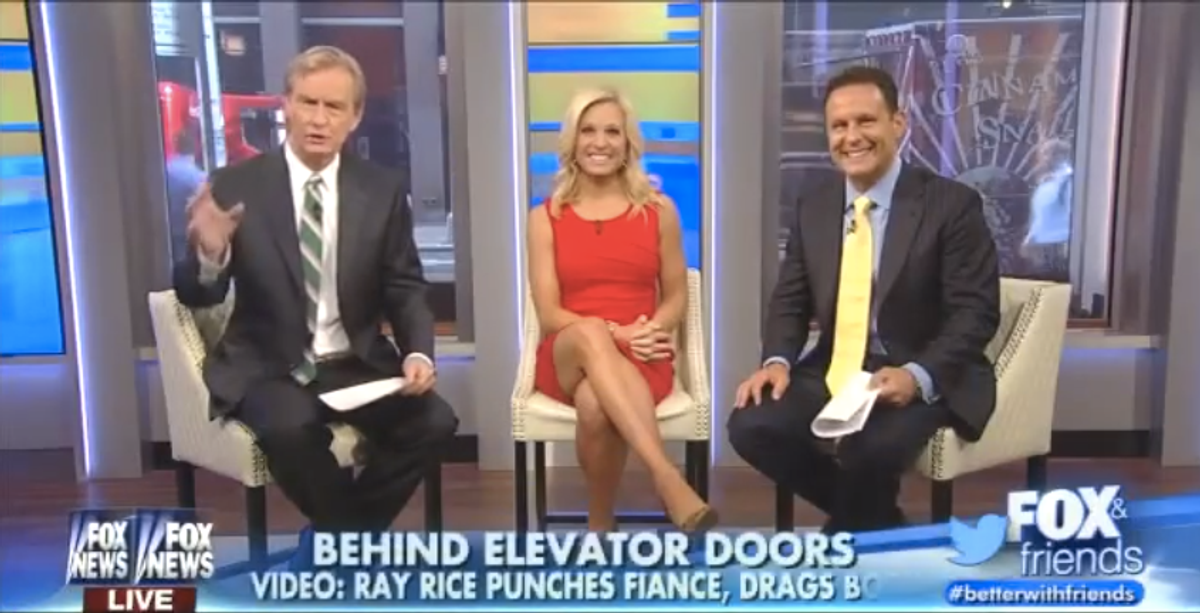 You know what Fox News thinks is hilarious? Wait for it: domestic violence.

Network panelists have made light of violence against women, in particular, on more than one occasion, but today the hosts of "Fox & Friends" decided to laugh mercilessly at the abuse of Janay Rice, wife of now-former Baltimore Ravens running back Ray Rice, who was terminated from his contract and suspended indefinitely by the NFL on Monday afternoon. Rice's dismissal came after TMZ posted leaked security camera footage of Rice punching his partner in the face and knocking her unconscious, before dragging her out of the elevator where the abuse took place. And boy did the Fox News hosts get a kick out of the clip!

"The message is, take the stairs," host Brian Kilmeade chuckled, after implicitly blaming both Janay Rice and Rihanna for their past abuses at the hands of their respective partners. Lucky for Kilmeade, his co-host Steve Doocy was there to correct him. "The message," Doocy said through a smirk, "is when you're in an elevator, there's a camera."

Ah, yes -- good point, guys. I guess that means domestic abusers should take care to knock their partners unconscious only in places free of cameras. Maybe a stairwell? Anywhere but an elevator, it would seem. It would also seem, judging by the hosts' laughter, that the thought of punching one's partner in the face and then dragging her by her hair is hilarious no matter where it happens. Of course, it's not, but is instead a sickening display of society's disregard for women's humanity and bodily autonomy.

The hosts of "Fox & Friends" don't have a great track record of understanding that, though. Just last week, Doocy found himself confused about the takeaway when several female celebrities had private photos stolen and posted on the Internet, offering up another deluded message: "Don't take naked pictures of yourself,” Doocy said. “There’s this thing called a mirror. If you want to see yourself naked, look in the mirror, don’t take a picture of yourself.” This is the same guy who's had plenty of other good advice for women, like "don't talk too much," and who suggested that the "Hobby Lobby thing had nothing to do with banning birth control pills or anything like that,” but that it “simply allowed employers who didn’t want to pay for drugs that end lives to not have to pay for them.”

I guess it's no surprise he and his illustrious co-hosts seem to have misunderstood the nature of Janay Rice's abuse.

Watch the "Fox & Friends" team joke about Rice beating his wife below: