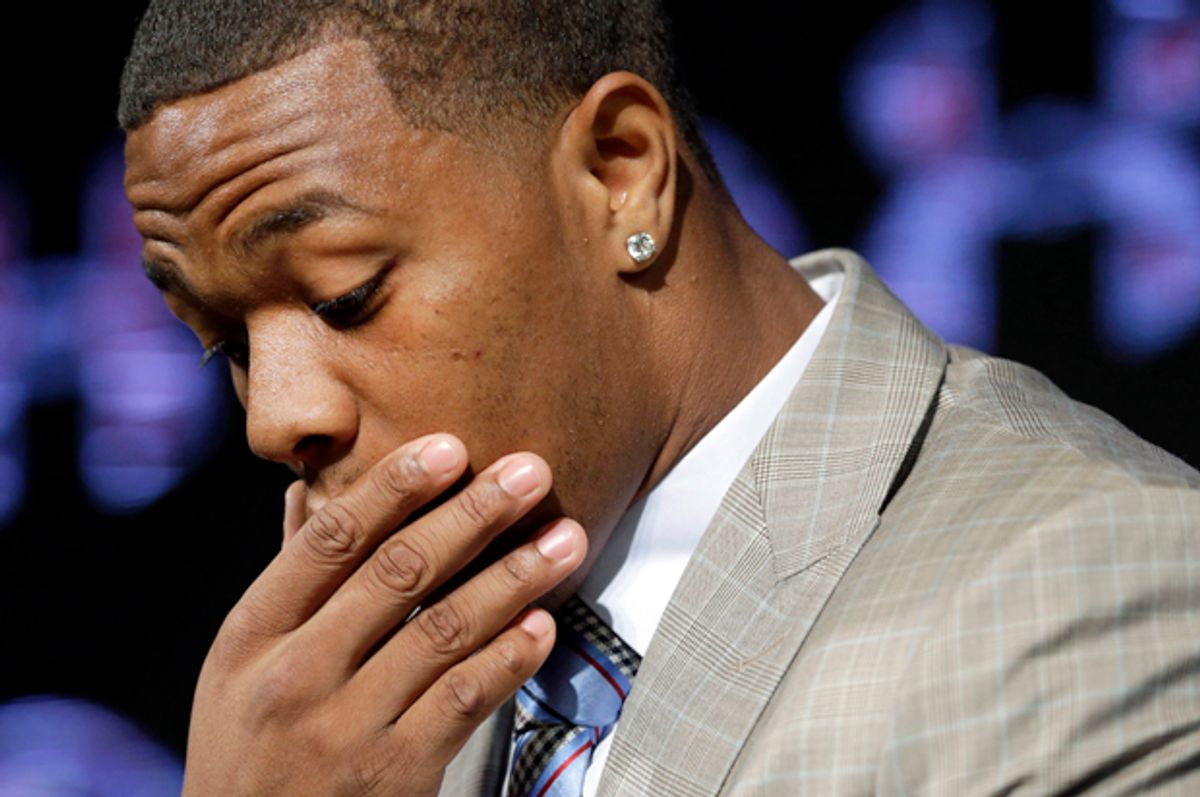 The video of Ray Rice is domestic violence in action: Rice hits his fiancée, she hits a railing on the way down, and then he calmly pulls her limp body out of an elevator. The only time he displays a shred of emotion is when he has trouble getting her legs to clear the elevator door. But if you think concrete video evidence is enough to convince people that Rice was horribly wrong, you must be new to the Internet. The denizens of r/MensRights have a lot to say about Ray Rice and domestic abuse, and it is disturbing:

“He defended himself from her first attack and moved away, then she came for a second attack and he defended himself, she fell and hit her head on the rail. As the research says, the strongest predictor of a woman being injured by DV [domestic violence], is her own initiation of violence.”

There were more comments like this in the r/MensRights thread about Ray Rice.

“She hit him first. He backed away and she came at him again. Glad he didn't get more in trouble,” said one Redditor.

I argue that if she had not hit the rail she would not have been knocked out. I argue that he is of such an enormous size compared to her that if he was acting out of aggression (seeing red) as opposed to self defense severly [sic] injuring her or killing her may have been the result. THATHE [sic] STOPS ALL AGGRESSIVE BEHAVIOR WHEN SHE HITS THE FLOOR IS TELLING. I argue that there is something intrinsically fucked up that she thinks she can start behavior like this with an individual that is so categorically out of her league. No right minded individual can look at those two body types and come to any other conclusion then 'if he defends himself he will fuck her up.'. There is no scenario where he defends himself and she comes out the victor What conclusion can be drawn from her behavior other then she believed he would not defend himself?

Another Redditor said Janay Rice was “poking the bear” in an attempt to bait her husband. He said it was Janay's fault for “lunging” at Ray and “antagonizing him.” He then went on to say Ray Rice “is not a woman beater” despite undeniable evidence that he is, in fact, a woman beater.

Many other commenters relied on the “the handrail knocked her out” defense. Another tried to flat-out state Ray Rice was the real victim of domestic assault:

Sure, she may have felt emboldened by the fact that she felt she could count on millions of apologists for female violence to take the wrong side on this issue if it ever became public, but fundamentally, she assaulted him, and he defended himself.

Did you know that if you play the video backward, Ray Rice helps his wife up and sends her on her way? So he's really not that bad of a guy!

Matt Saccaro is a writer whose work has appeared on Salon, The Week, The Daily Dot, and The Kernel. He has been cited in Wikipedia. Follow him @MattSaccaro.