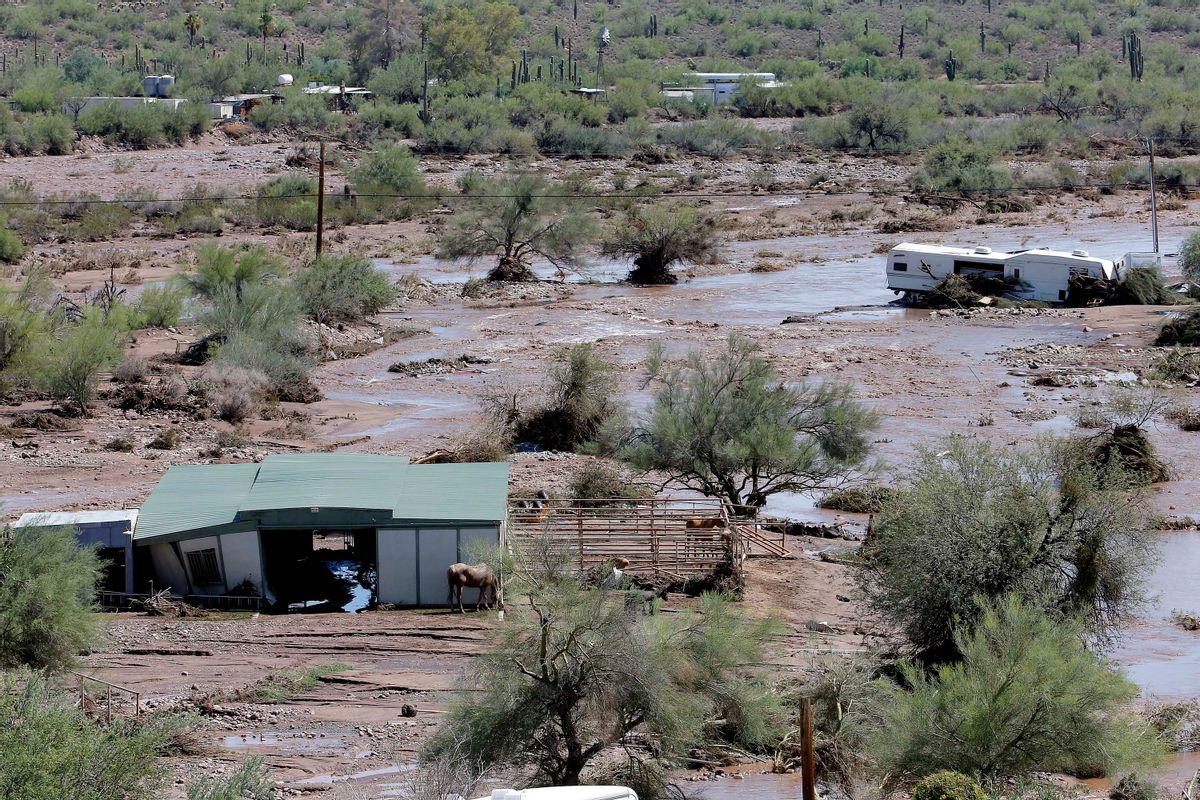 Climate change is like Voldemort, the Associated Press reports, and the leaders of red-state cities are increasingly employing euphemisms so they get about their business of preparing for its effects -- without ever having to actually name what it is they're talking about:

But in many places, especially strongholds of conservative politics, they're planning for the volatile weather linked to rising temperatures by speaking of "sustainability" or "resilience," while avoiding no-win arguments with skeptics over whether the planet is warming or that human activity is responsible.

..."The term 'global warming' seems to be thoroughly misunderstood, so we don't use it much," Vandermeulin said, even though a primary goal is helping communities prepare for ... global warming.

We talk a lot about how we need to move past the debate on whether man-made climate change is happening and onward to what we're going to do about it. So it's interesting to see how savvy leaders have figured out how to skip ahead to that crucial second step -- and it's good to hear that even cities headed up by the worst of the climate deniers are finding ways to deal with and prepare for the effects of climate change. But ignoring the debate won't make it go away. And at the end of the day, failing to take any and every opportunity to talk about the big picture could end up doing us all a disservice.

It's not just red states, after all, that are avoiding the planet-size elephant in the room. Yesterday, Phoenix experienced its wettest day -- ever. You'd be hard-pressed, in the (national) media coverage of the deluge and resulting floods, to find reporters drawing the connection between climate change and an increase in extreme rainfall events. That's not technically wrong of them, because no one weather event, no matter how unprecedented, can be tied to climate change. But it is leaving out a big part of the story. Andrew Freedman tacked this disclaimer onto his own coverage of the rainfall for Mashable: "An increase in heavy precipitation events is one of the more robust findings of how global warming is already affecting the U.S. and other countries." Draw 'em in with photos of submerged cars and dramatic tweets about broken records, then spring some climate reality on them -- the trick isn't to stop talking about climate change; it's to talk about it so much that it eventually stops being so controversial.

"This American Life" aired a great episode last year that made a similar point about how the climate conversation is hopelessly stuck. It featured an interview with Nolan Doesken, Colorado's state climatologist, who, although he understood that the state's unusual droughts and heat waves were related to climate change, avoided drawing that connection when speaking with ranchers and farmers who were less receptive to the message. "Telling people to believe something different than what they do hardly ever has an impact," Doesken explained. "And if anything, it just is a reason for alienation. For me to just make a bold statement, that's not going to serve any good purpose." That all changed, though, in the summer of 2012, the worst wildfire season in Colorado's history. It's when Doesken says he came to understand that yes, it was pointless to argue over whether climate change or natural variability was behind the extreme weather, but that there was a bigger point to be made: that summer's extremes foretold what climate models predict will increasingly occur in the future. And he'd be doing people a disservice not to warn them about that risk, even if it was something they didn't want to hear.

When we build flood defenses, or develop "cooling stations" to help low-income people get through heat waves, or push to conserve drinking water, we need to make it clear that we're preparing for the local consequences of a global problem -- one for which human activity is responsible, and one that we, collectively, still have the power to mitigate. Every time we fail to make that connection, we're missing an opportunity to clarify that most misunderstood of topics, to make the science hit home, and to garner the support needed to inspire action.