The left makes its voice heard: How Zephyr Teachout is reminding Andrew Cuomo there are liberal Democrats 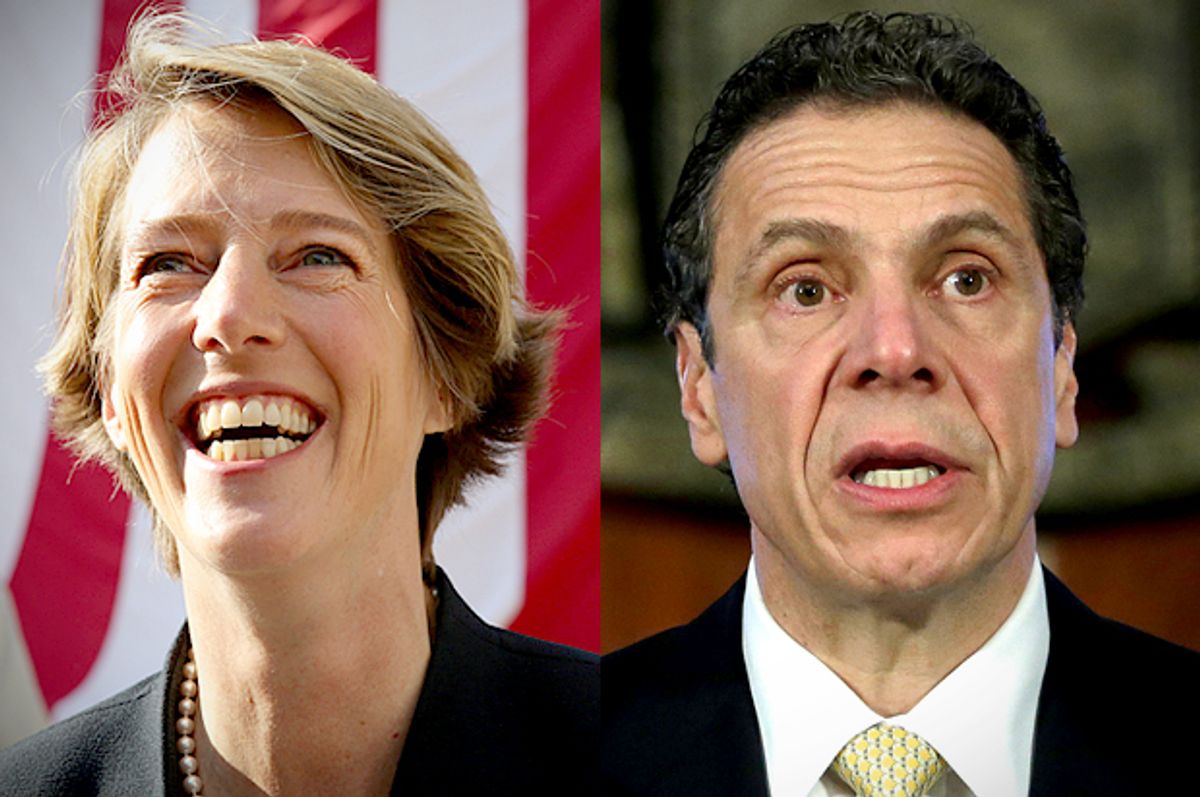 The only person more surprised than I was to find Kathy Hochul anxiously shaking hands at my 96th and Broadway subway stop last Friday evening was her running mate, Gov. Andrew Cuomo. A spirited and unlikely primary challenge from lefty law professors Zephyr Teachout and Tim Wu forced the Democratic titan’s team to play defense, only days before the election, on Manhattan’s ultra-liberal Upper West Side. Tim Wu was there too, and it was a lot of fun:  New York liberals were actually being courted as more than just campaign donors, in a primary that wasn’t supposed to happen.

I don’t like making election eve predictions, but I’m going to hazard a guess here and say Cuomo will eke out a victory Tuesday night. With a lot of help, Hochul probably will, too, but that’s a little less certain. The moderate Buffalo Democrat was supposed to help Cuomo secure votes outside Manhattan, since the governor was, of course, looking past the primary to November. Instead she became a liability: The New York Times even endorsed Wu, while making no endorsement for the governor’s seat, a stunning rebuke to Cuomo. Which is why Hochul was spending some of her premium hand-shaking time campaigning on the Upper West Side, the capital of New York Times country.

That’s just one example of how Teachout and Wu became the conduit of a broad dissatisfaction with Andrew Cuomo’s brand of “liberalism” – good on social issues like gay rights and guns, bad on economic populism, and contemptuous on questions of political corruption. Cuomo’s arrogant defense of tampering with “his” Moreland commission is likely what cost him the Times endorsement; picking a blue-dog, pro-fracking running mate like Hochul, one of only 17 House Democrats to vote to hold Eric Holder in contempt over the Fox-confected “Fast and Furious” investigation, didn’t help.

For his part, Cuomo spent the last day before the election actually campaigning for the votes of Democrats, something he previously seemed to have no intention of doing. At a Manhattan union hall, he found himself echoing progressive Mayor Bill de Blasio, his frenemy, labeling income inequality “a terrible problem in this nation.” He also suddenly vowed to raise the state’s minimum wage, which was part of a deal de Blasio cut to win Cuomo the support of the left-leaning Working Families Party, after Teachout almost took the nomination last May.

I’m very proud of my role in that deal ... If I’d dropped out, there would have been no … deal. So it’s a very big lesson in the importance of even the shortest of primaries … Don’t leave power on the table. Don’t give it away.

In Chicago, Teachers Union president Karen Lewis seems to be listening, edging closer to a decision to challenge Mayor Rahm Emanuel from the left. Hillary Clinton may hear the message as well if she runs in 2016, when she’s more likely to have a challenger from her party’s left than its right, possibly from lefty elder statesman Sen. Bernie Sanders. Although Teachout wasn’t ready to concede she’d lose to Cuomo, she told me she’s looking to stay in electoral politics, and I hope she and Wu will run for something else if they lose tonight. She has another message for progressives: “You know, politics is way undersold. It’s so much fun.”

I’d have liked to see Cuomo defend his brand of liberalism with specifics. Instead, when asked about his tax-cutting, triangulating approach by the Washington Post, Cuomo merely replied “Why did the Working Families Party, which is made up of the most liberal institutions in the United States of America — you go to their left, you fall off the planet — why did they endorse me if I’m such an economic conservative?” he said. (Of course, part of that answer can be found here, and it has little to do with him being liberal on economic issues.) He refused to debate Teachout; his aides even blocked her approach to say hello at a Labor Day parade last Saturday.

But this was a month when Cuomo was supposed to be looking past the Democratic primary to November, and racking up a huge victory over Republican Rob Astorino in preparation for a White House run in 2016, should Clinton decide against it, or four to eight years later. If nothing else, Teachout’s challenge taught him he couldn’t take for granted the votes of liberal Democrats – not even on the Upper West Side.