You think your smartphone is a privacy-destroying tracking device? You ain't seen nothing yet 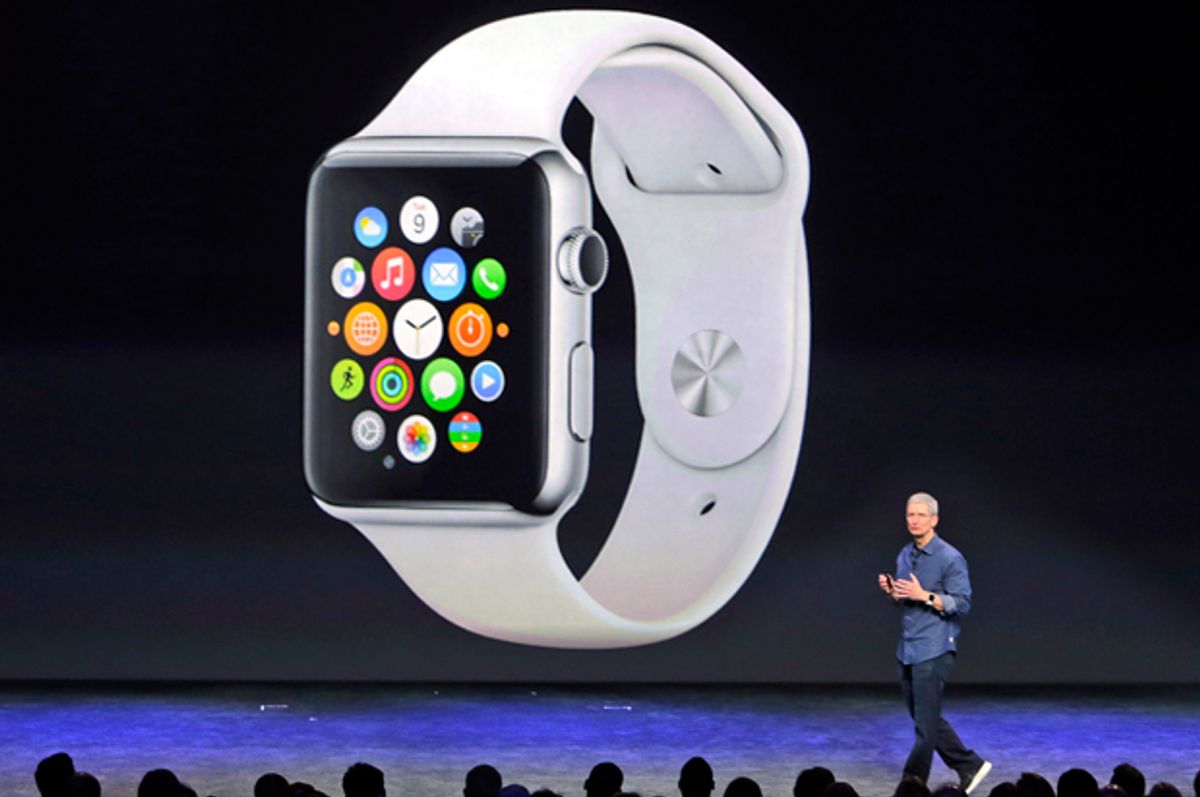 Watching the livestream of Apple's iPhone and Apple Watch event Tuesday morning was an intriguing exercise in cognitive dissonance. On the one hand, the fanboy adulation that swamped Cupertino seems almost unseemly in its jubilation. When CEO Tim Cook uttered the legendary "One More Thing" mantra for the first time since the death of Steve Jobs, a good third of the assembled audience appeared ready for instant Rapturing. Yet at the same time, on Twitter, an endless parade of snark and carping threatened to overwhelm any attempt at actual analysis.

And that was too bad, because the company's rhetoric about its new products exposed a fascinating contradiction at the heart of Apple's evolution. Apple simultaneously made an explicit commitment to keep our personal information private, while at the same time demo-ing a device designed to capture an unprecedented degree of our most personal, intimate details.

During a description of "Apple Pay" -- a new technology that will allow users to buy products by essentially waving their phones at the cash register rather than processing a credit or debit card -- Apple executive Eddy Cue said something very much in tune with our privacy-obsessed times.

"Apple is not interested in collecting your data," he stressed. Apple, he promised, will never know your credit card number or even what you buy. "The transaction is between you, the merchant and your bank."

That's a bold claim for a smartphone company to make. It's also an obviously self-serving political statement, meant to differentiate Apple from some of its most famous competitors.. Unlike Google, unlike Facebook, Apple was declaring that its business was not based on hoovering up all of our information so as to better target us with ads. Apple's business is to sell us gadgets that make our lives easier. If Apple Pay works -- it's also designed to simplify the mess that is online shopping -- Apple will immediately obliterates the business models of other mobile transaction companies that are predicated specifically on turning data analytics into profit. It's a smart move. Use Apple Pay, and keep your shopping private -- or, at least, private from Apple.

But wait, not five minutes after stressing the importance of keeping information private, Apple introduced the Apple Watch, a device that connects directly to your skin and comes with multiple sensors that will be able to monitor a wide range of biometric data. During the Apple Watch rollout, I lost count of the number of times I saw critics complain that "millennials don't wear watches" or "I don't need a $349 device to tell me what time it is" or "why do I want to duplicate all the functionality of my phone on a smaller device while still having to carry my phone with me?" All these observations are true enough (though I'll bet that somewhere down the line, the Apple Watch will be able to stand alone without an iPhone). But they miss completely the positive case for why people might seek out such a device. The fact that the Apple Watch tells the time is the least interesting thing about it. If you're the kind of person who likes to keep track of your exercise metrics, the Apple Watch is an instantly seductive fitness tracker. As a cyclist with a bike computer that's beginning to show its age, I can easily see replacing it with an Apple Watch. I know scores of people who track their steps every day with pedometers, who might enjoy a device that can also give them turn-by-turn directions while they walk. And I know diabetics who are desperate for simple user-friendly devices that can be used to track their blood glucose levels.

We'll find out sometime in 2015 if the use-cases for the Apple Watch are compelling enough to make the product a success. But for now, the intriguing point is that the Apple Watch is well positioned to act as a device that continually monitors our physical and biological state -- and it just doesn't get any more personal than that.

So yeah, here's hoping that Apple means it when it boasts about not being in the business of collecting our information.