The complexities of violence don't lend themselves to easy solutions. But listening to survivors is a start 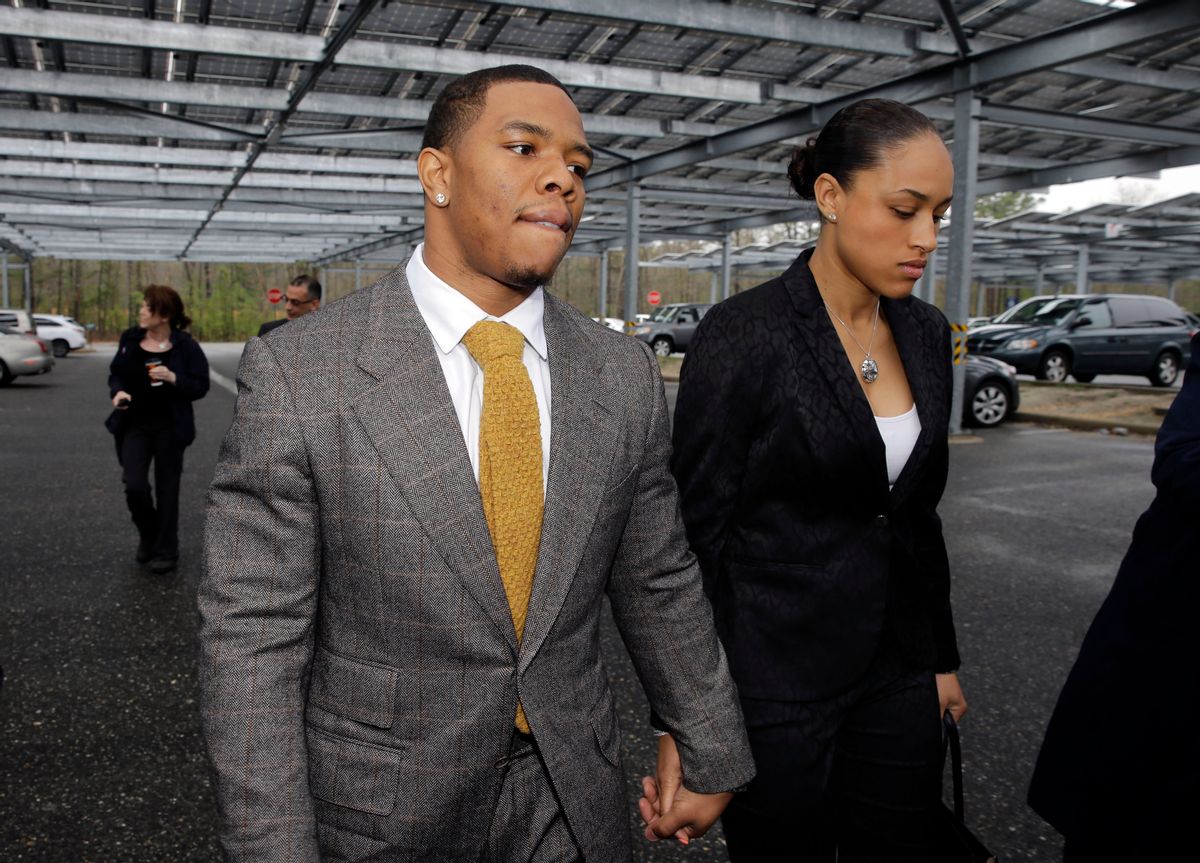 If there's one thing that's been made clear over the last 24 hours, it's that the way we talk about domestic violence is very badly broken. "Broken" might not even be the right word, since there is nothing that came before the brokenness except for more brokenness. Our culture has a problem with violence against women that did not start -- and will not end -- with Ray Rice, but the profile of his brutal assault has pushed people to talk about domestic violence. And this talking, I suppose, is some small measure of progress. But progress is never clean. So here we are.

I'm tired and still feeling mentally cluttered because there is so much out there. The footage of the brutal assault. Janay Rice's statement on the media circus that has erupted around her. The commentary about what this all means. It's dizzying.

This kind of fatigue is familiar. (I've found that this exhaustion comes at reliable intervals, something that can be cycled in and out of during a single day.) The problem can sometimes seem too vast, the destructive and punishing ways we tend to treat victims too deeply entrenched. And the complexities of the issue don't lend themselves to neat fixes.

This is, perhaps, the thing we should be spending our time talking about.

Roxane Gay makes this point with typical clarity (and astoundingly few words) in her response to the release of the footage. "But we also need to reframe how we talk about domestic violence so that we're less definitive about what we think should happen," she tweeted Monday. "And instead, maybe frame the convo as to how we can support women (and men) who are in abusive relationships."

Knowing what this support looks like requires listening to people who have experienced domestic violence, which is not something that we're doing right now.

The conversation unfolding through #WhyIStayed and #WhyILeft has centered on survivor voices in an unprecedented way, but the question remains whether people will listen. The reach of these voices might be new, but survivor testimony is not. Our culture's ignorance about domestic violence has always been willful, has always hinged on our refusal to listen to the survivors who know things, the messy things.

Women, particularly women of color and undocumented women, have long been clear about the dangers of calling the police in the midst of a domestic violence incident. For a woman without legal papers, calling the cops can mean detention, often deportation. For mothers, deportation means being separated indefinitely from children who may have been born in the country. For other women of color, calling the police to halt abuse can mean being arrested or getting evicted. There's also the threat of experiencing more violence at the hands of a police force that can act with impunity.

The complications don't end there, never could end there. Many women don't call the police because they're fearful that they won't be believed. Others don't want to see their partners go to prison, for reasons that are shaped by circumstance and always complex. We know a lot about the cyclical nature of abuse, the fact that men who hurt women were often hurt by someone else. We also know a lot about the racism of the criminal justice system. We know about prisons that do nothing to challenge violent masculinity, but are instead places where this disease only festers.

And sometimes women leave. But even this is no guarantee of safety. Another thing that a person can learn if they listen is that victims face an increased level of violence when and after they leave an abusive relationship. Restraining orders are hardly a comfort. And there is no infrastructure in place to ensure women's safety once they take this step. Finding shelter remains a challenge, with domestic violence service providers understaffed and shamefully underfunded. And what about the challenges faced by women who leave without the aid of these providers, since these (limited) resources are not universally accessible? What about the economic realities of finding housing, another job, another vehicle, another bank account -- all of the banal details that we don't consider when we talk about upending a woman's life? We never talk about these things when we ask, "Why didn't she leave?" But the women who face these choices do.

What we have here is an inadequate accounting of the barriers women face to securing their physical safety. And this is hardly the end of the questions that need to be answered if we want to support survivors and meaningfully address our culture's problem with violence against women. It's all so messy. And if you don't think it's messy, then you're just not listening. Supporting survivors means understanding and helping to build the kinds of systems we need in place to ensure that victims can escape violent relationships without further risking their safety, livelihoods and lives. But the listening comes first.