Calm down, America: We're as safe as we were a year ago

Polls show Americans believe we're as vulnerable as we were before 9/11. It's hype and fear -- and simply wrong 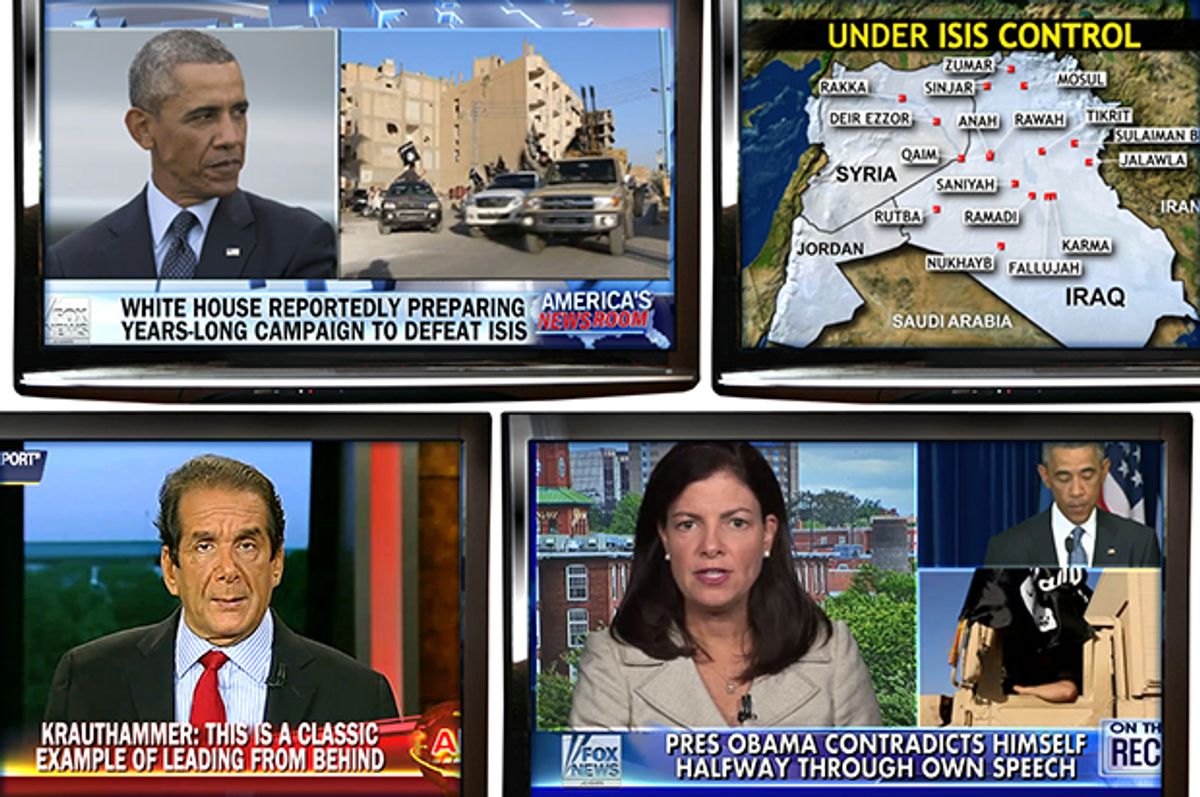 President Obama hasn’t even given his speech outlining plans for increased military action to combat the Islamic State in Iraq and Syria, but we already have a chyron for its coverage: “America on Edge” is the way NBC headlined its new poll Tuesday, which found that 47 percent of Americans believe the U.S. is less safe than it was before the attacks of Sept. 11, 2001.

That’s higher than a year ago, when only 28 percent said we were less safe, and it’s higher still than in September 2002, only a year after the terror attacks. Only 26 percent of those polled said the country is safer than it was before Sept. 11, even though al-Qaida has been decimated and there have been no domestic attacks since the homegrown Boston bombing.

Over at CNN, polling tells the same story: 7 in 10 of those polled “believe ISIS has the resources to launch an attack against the United States,” a new poll found, while 76 percent favor “additional airstrikes against ISIS.” I'm sticking here to sober, serious news organizations -- I'm not even bothering to run down the fear-mongering over on Fox.

So the president would seem to have part of what he needs to commit the country to greater military involvement in a murky conflict: fear.

"Americans are significantly less reluctant to use military force than they were a year ago,” CNN polling director Keating Holland said, “and the number who say that terrorism is the country's most important problem has quadrupled, making it second only to the economy on the list of top problems in the public's mind."

Both the CNN and NBC polls indicate that the single biggest factor behind the surge of fear is the beheadings of journalists James Foley and Steven Sotloff. In the NBC poll, 94 percent said they’d heard news of the beheadings, which is higher than any other news event polled in the last five years. They accomplished what they were intended to: make Americans feel vulnerable, angry and ready to fight. Mission accomplished, ISIS!

This despite the fact that the beheadings changed nothing about the security situation in the U.S., and gave us little or no new information about ISIS’s capacity in Iraq or Syria. As I wrote after the Sotloff tragedy, nobody came to our shores and snatched those men. Unless you're judging American security by the safety of freelance Syria correspondents, nothing that happened to them proves that there's any increased danger to Americans. We learned nothing new about the power or reach of ISIS, or its cruelty. The beheadings were designed to make the U.S. overreact, and to draw the country into a one-on-one war with “the Islamic state.” Let’s hope on that count they fail.

No doubt people are also concerned by reports that up to 100 Americans have joined ISIS – and presumably they’d have an easier time returning and causing harm in the U.S. But those reports turned out not to be true. Roughly 100 Americans have, at some point, gone to Syria to be involved in the fight there – but that count includes moderates fighting on the U.S. side.  The Pentagon estimates the number allied with ISIS to be around a dozen.

Right now the president is mostly sounding cautious. But his souped-up rhetoric of “degrading” and “destroying” ISIS of late is no longer accompanied by the calm prediction that we could make ISIS a “manageable problem.” Nobody liked that language, the notion that ISIS might remain a problem, albeit a manageable one. Even though that’s often the best we can hope from life’s challenges: that we can make them manageable problems. That’s true on a personal level and it can also be true on a geopolitical one.

I find myself thinking about David Rees’ brilliant cartoon, “Get Your War On,” that satirized the frenzy for safety and for revenge in the months, and then years, after the 9/11 attacks. It's possible to make the case, as the president is expected to tonight, that the rise of ISIS, the collapse of Iraq and the unraveling of Syria represent potential threats to the long-term security of the U.S., and may even require greater military intervention than I’m comfortable with.

But it should not be based on the premise that we’re suddenly in greater danger than we were a month, a year or a decade ago. There is no evidence, to this point, to show that we are.