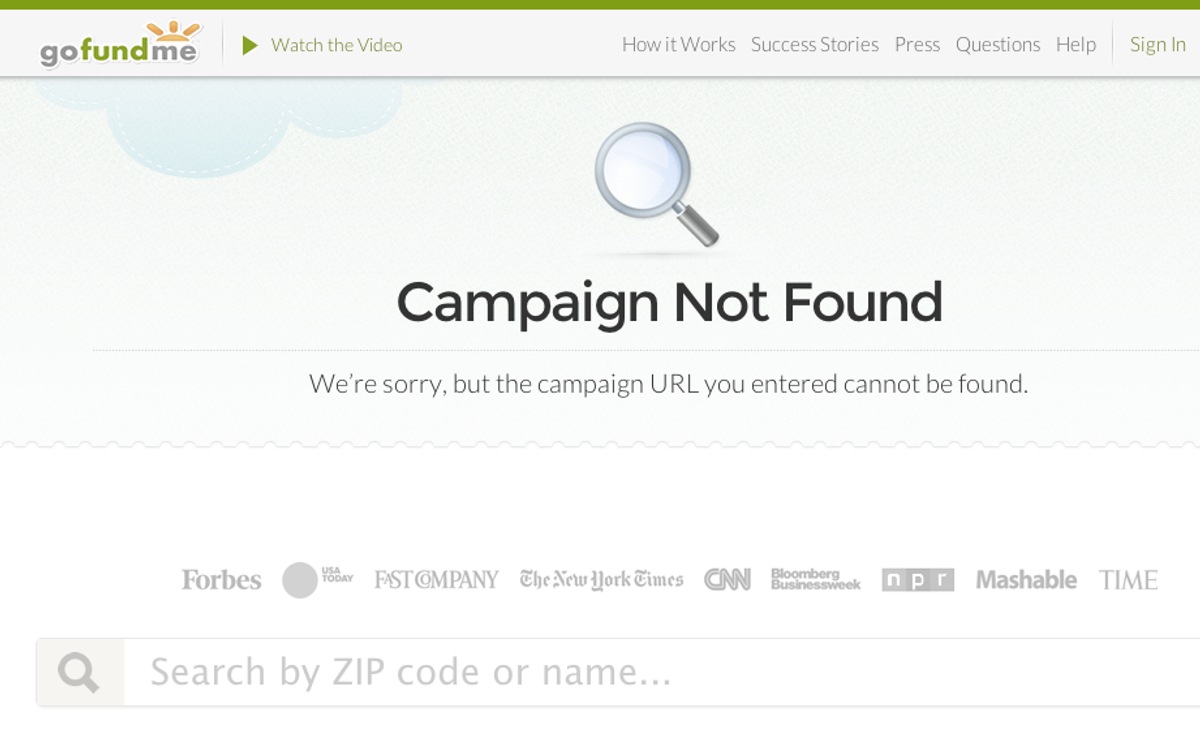 Last week, crowdfunding platform GoFundMe pulled a campaign to raise money for an Illinois woman's abortion. In a message to the woman, identified only as Bailey, GoFundMe said that the fundraiser was not "appropriate" for the site because it contained "subject matter that GoFundMe would rather not be associated with." In an earlier comment to Salon on its decision to shutdown the campaign, a "customer happiness" representative said that each review is handled on a "case-by-case basis" and, "In this particular case, GoFundMe determined that the fundraising campaign titled 'Bailey's Abortion Fund' would be removed from the site."

But as of this week, the site will no longer handle campaigns to fund abortion on a case-by-case basis. According to GoFundMe's updated guidelines ("What's Not Allowed on GoFundMe"), abortion fundraisers are banned without exception. In addition to prohibiting crowdfunded abortion campaigns, "content associated with or relating to" abortion is also banned. This information is listed under the headline, "Termination of Life," which is the same language used by antiabortion activists who believe in fetal personhood. (The American Congress of Obstetricians and Gynecologists defines abortion as "a procedure that is done to end a pregnancy.") In fact, GoFundMe has a separate section outlining which medical campaigns are prohibited, but abortion is not listed in it.

But the ban on abortion-related content has not been neutrally applied. As of Wednesday afternoon, there are still pages of antiabortion campaigns active on the site. It seems that you can't use GoFundMe to raise money for anything related to abortion -- unless you're campaigning to ban abortion.

One campaign that raised $1,510 of its $1,700 goal described its mission as "Advocating for Women & Girls at the UN," and informed potential donors, "Your donation will help spread the word of more atrocities that take place in American abortion clinics."

Another campaign called "Walk for Women and the Preborn" raised $210 of its $1,000 goal, and includes in its mission, "The EU and Planned Parenthood continue to batter the Irish with ever greater violence to accept abortion, abortion which is the greatest act of violence against woman or child in the history of our world."

These campaigns have completed their fundraising goals, but remain on the site despite the new guidelines. Another active campaign asks donors to "Help Replace Planned Parenthood .... the largest abortion provider in the world." Bailey's, however, was pulled entirely.

There are a few things here. GoFundMe encourages users to take "the web by storm" and "raise money for medical expenses" on the platform. The blanket policy makes clear that the platform does not view abortion as medical care, or abortion expenses as medical expenses. And, as I noted before, the language of the updated guidelines is a wholesale embrace of antiabortion rhetoric. There is nothing neutral about this.

But Bailey's campaign was not the first or only to crowdfund an abortion using the platform, it was just the most public. The tone of Bailey's request was also markedly different than previous campaigns. "Aside from having no desire to raise a child, she is economically unstable and can barely afford to support herself, which means having enough money to pay rent, smoke cigarettes, drink rockstar, support her friends in prison, and if she’s really busted her ass, maybe go to a show or two," according to the (now deleted) campaign page.

So what seems to have happened here is that a young woman's refusal to assume a posture of remorse around her decision to get an abortion made abortion opponents very, very mad. The campaign blew up, and GoFundMe pulled it. Then GoFundMe went further and instituted a total ban on abortion-related content, which has not been applied to campaigns trying to deny people access to abortion care.

The message the site is sending is clear, and is the same message being sent by politicians across the country: abortion is not medical care, and people seeking abortion care should feel shame for doing so. People may want to consider those messages when using the platform to raise money. (Reproductive rights activists have already put out a call for action.) GoFundMe, after all, keeps 5 percent of all donations.

The purpose of our Acceptable Use Policy is to set standards that help ensure GoFundMe will be used in appropriate and impactful ways that are suitable for all audiences.

GoFundMe’s policies exist to protect our brand from certain materials and subject matter whose proponents span the political spectrum. For example, GoFundMe may not be used to fund an abortion or to purchase firearms.

As part of the revised Acceptable Use Policy, we will review the specific purpose of a given fundraising campaign in order to arrive at a decision that is best for the GoFundMe brand and community. At this time, GoFundMe makes no distinction and places no restrictions on a pro-life or pro-choice group’s ability to fundraise for rallies or protests.

Due to the sheer volume of media inquiries we are experiencing, we won't be able to address all of your questions individually.