In "No Good Deed," Idris Elba plays a slick, dangerous misogynist. What does it mean if we're attracted to him? 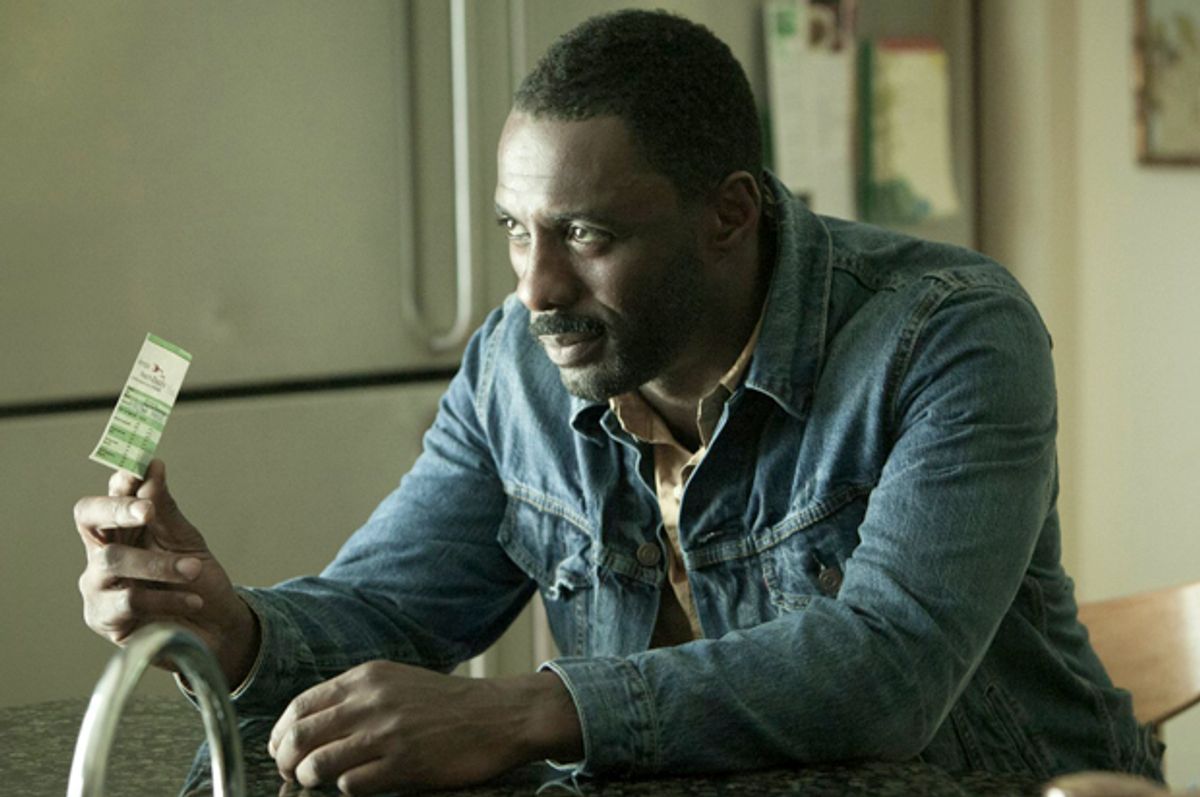 I initially felt ashamed while watching the trailer for Idris Elba’s upcoming thriller, "No Good Deed," for when the preview cut to a scene of Elba in the shower (well, Elba period), I thought, I’d definitely let him in my house. Immediately, I couldn’t believe what had just run through my head. In that way, "No Good Deed" is unusual. It forces his female fans into this new, awkward position of desiring a man who seems like he could hurt you. But it’s a position that male moviegoers know very well — so well, in fact, that it’s perpetuated a lopsided sexual dynamic on-, and off-, screen.

A quick search for “sexy villains” returns a page of results dominated by the lists of the “top sexiest female villains.” Indeed, many of our favorite villainesses are adept at using the power of seduction in their arsenal of weapons. Michelle Pfeiffer purred and licked like a Catwoman in heat in "Batman Returns." And Sharon Stone literally used her naughty bits as the first ensnaring trap in her psychopathic killing spree in "Basic Instinct." These amazing performances, however, have come with a cost.

It seems that Hollywood has a sexy villain problem. Male villains are usually uglied up: Javier Bardem in "Skyfall," Tom Cruise in "Tropic Thunder," or Heath Ledger in "The Dark Knight." Of course, there have been sexy actors who play the bad guy, and male characters have used sex as a power play or act of dominance over a female protagonist (see: Buck in "Kill Bill: Volume 1" or Lisbeth Salander’s guardian in "The Girl With the Dragon Tattoo"). However, few male villains use their sexuality to lure or tempt their victims, to serve up their sex on a platter as kryptonite for both the female characters in the film and the women sitting in the theater seats.

The exceptions to this rule are the supernatural, or the undead. Vampires are sexy (Colin Farrell in "Fright Night"). Devils are sexy, too (Al Pacino in "The Devil’s Advocate"). The film industry has assigned sex as the weapon of choice for the condemned and eternally damned. Aside from being extremely fetishistic, the vampire-sex connection exists literally at the root of how we may describe a seductive woman, i.e, the vamp.

A “vamp” is one who uses her sensuality to bleed her victims. Her sexuality can kill. In film, the only thing that really makes our female villains evil is their ability to seduce the hero. In "Hancock," Charlize Theron’s superhero threatened Will Smith’s immortality every time the two acted on their romantic attraction. There’s also the all-too-familiar black widow reference: a woman who seduces and murders men for various reasons, usually for money, as with the Debbie Jellinsky character in "Addams Family Values"; sometimes for love (if you could call it that) per Glenn Close in "Fatal Attraction"; and then, at times, for nourishment, as in Megan Fox in "Jennifer’s Body."

Laura Mulvey’s 1975 manifesto identified the visual pleasure of the active male gaze and the passive female object. But the female villain today provides a new twist on this pleasure principle. Her sexual prowess is praised publicly as a modern feminism, yet she still remains spectacle for the spectator, he who interprets her perceived sexual authority as an opportunity to react. Our male protagonist, then, becomes the passive victim to our villainess’s active sexuality.

When the audience accepts that passivity, it can be dangerous. The audience excuses the main male character’s powerlessness in the face of female seduction, and removes his responsibility in controlling his reaction to it. Every reaction to that character is in response to her sex, by men both on- and off-screen. And so, female sexuality becomes something that must always be addressed or responded to  — thus the male protagonist is not held accountable for his reaction when faced with such a formidable (and sexy) foe.

Here, we see a similar rationale that pervades the culture today; that in order to prevent assault, women should not wear revealing clothing lest they tempt the men who believe a short dress is actually an invitation for a sexual encounter. It’s a slippery slope of passivity that leads to a  misunderstanding of what sexual compliance is.

Moviegoers who are fed images of sexually aggressive female villains, whose sole purpose is to lure, distract or tempt the male hero, become complicit in the perception that all women who are sensual are ready, willing and desiring of attention from the opposite sex.

The best way to level this sexual imbalance in cinema is twofold. The first is to make female sexuality as fluid as male sexuality in film. Let it serve, not just as the foil to the male character, but as one of many complicated traits in the female character herself. "Vicky Cristina Barcelona" accomplished this with all three of its main actresses, Scarlett Johansson, Penelope Cruz and Rebecca Hall. At the same time, Javier Bardem was also treated as a sexual being in similar fashion as the women in the film — his sensuality helped to dictate the actions of the other characters.

More roles like this for men will help to share the burden of sexual responsibility for women and men. Yes, Elba made me squirm at the idea of being attracted to him in the trailer, but that’s OK. Denying the intentionality of male sexuality is far more dangerous than admitting that it exists.

In 2011, the remake of "Straw Dogs" saw some criticism for its marketing of heartthrob Alexander Skarsgard, who played a rapist in the film. While Sony’s tweets were questionable, the idea of the attractive rapist should not be. Not all aggressors are ugly trolls who have been “pushed” into morally reprehensible behavior due to a history of rejection by women. Sometimes, they are beautiful men who charm and enchant women with their good looks. It might be an uncomfortable feeling for the audience, but film, as art, is meant to challenge the status quo. In real life, the truth is ugly, but sometimes, the bad guy isn’t.