Republican hawks can't be trusted: If the GOP wants this war, Obama must force them to say so -- with a vote 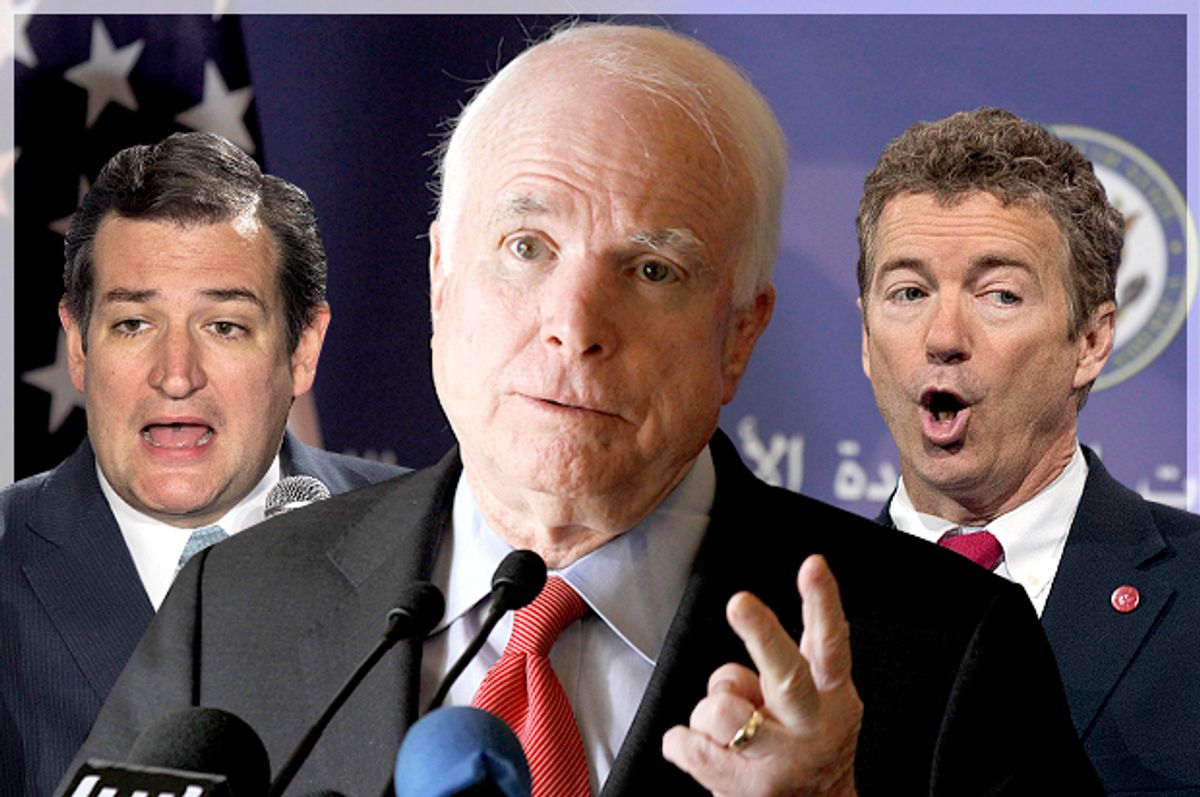 President Obama doesn't appear interesting in seeking additional congressional authorization for whatever multitiered, multinational, and multiyear military doohicky against ISIS that he's going to present in his speech tonight. "The president told the [congressional] leaders that he has the authority he needs to take action against ISIL in accordance with the mission he will lay out in his address tomorrow night," the White House said in a statement yesterday. "He reiterated his belief that the nation is stronger and our efforts more effective when the President and Congress work together to combat a national security threat like ISIL."

The White House added that it hopes to outline a role for Congress that "would aid the overall effort and demonstrate to the world that the United States is united in defeating the threat." What this appears to mean is that Obama will ask Congress to approve funding to train and arm Syrian rebels to assist in the fight against ISIS. Or something else, to ensure some level of "buy-in" from Congress.

So no declaration of war, or new authorization for use of military force. There are a couple of extremely obvious sets of problems this brings about that we're going to tediously consider anyway. One is about policy and the other about politics.

President Obama is going to draw on his Constitutional power as commander-in-chief to use the military to prevent an immediate threat to the homeland. The case he'll be making is that ISIS represents an imminent threat to the United States. He'll have a receptive audience for that, as a significant majority of Americans, suddenly, believe that there are "ISIS sleeper cells" operating within the United States -- perhaps hiding under the bushes in your backyard, or in the sewer system of your cul-de-sac. It just doesn't sound like a very honest argument. As Obama himself said on "Meet the Press," he wants "everybody to understand that we have not seen any immediate intelligence about threats to the homeland from ISIL. That’s not what this is about.” On the other hand, he could claim that Congress passing supplemental defense appropriations for the fight against ISIS would count as a tacit authorization.

“A lot of people would like to stay on the sideline and say, ‘Just bomb the place and tell us about it later,’ ” said Representative Jack Kingston, Republican of Georgia, who supports having an authorization vote. “It’s an election year. A lot of Democrats don’t know how it would play in their party, and Republicans don’t want to change anything. We like the path we’re on now. We can denounce it if it goes bad, and praise it if it goes well and ask what took him so long.”

There's a third scenario for political responses from Republicans, actually: that it goes somewhere between "good" and "bad." The stakes have been raised so high, among members of both parties, that nothing less than the "destruction" of ISIS is now the goal. What if all our missiles and all our might are successful in "degrading" ISIS, but not in "destroying" them, whatever that even means? What if another beheading video comes out? Then the President's going to catch all sorts of flak from those who haven't bound themselves to his plan for his weakness and timidity and so forth.

This is a long-term mission and it's not without its complications -- very fundamental complications with which the White House itself is still "wrestling." Just look at these complications!

But Mr. Obama is still wrestling with a series of challenges, including how to train and equip a viable ground force to fight ISIS inside Syria, how to intervene without aiding President Bashar al-Assad, and how to enlist potentially reluctant partners like Turkey and Saudi Arabia.

This isn't going to go perfectly. But Obama feels that something needs to be done and he doesn't want to risk the possibility of Congress voting him down. Hopefully he's prepared, then, to field yet more objections about the "imperial president" -- except this time, with teeth.