The NFL commissioner sat down for an interview with CBS. It didn't go well 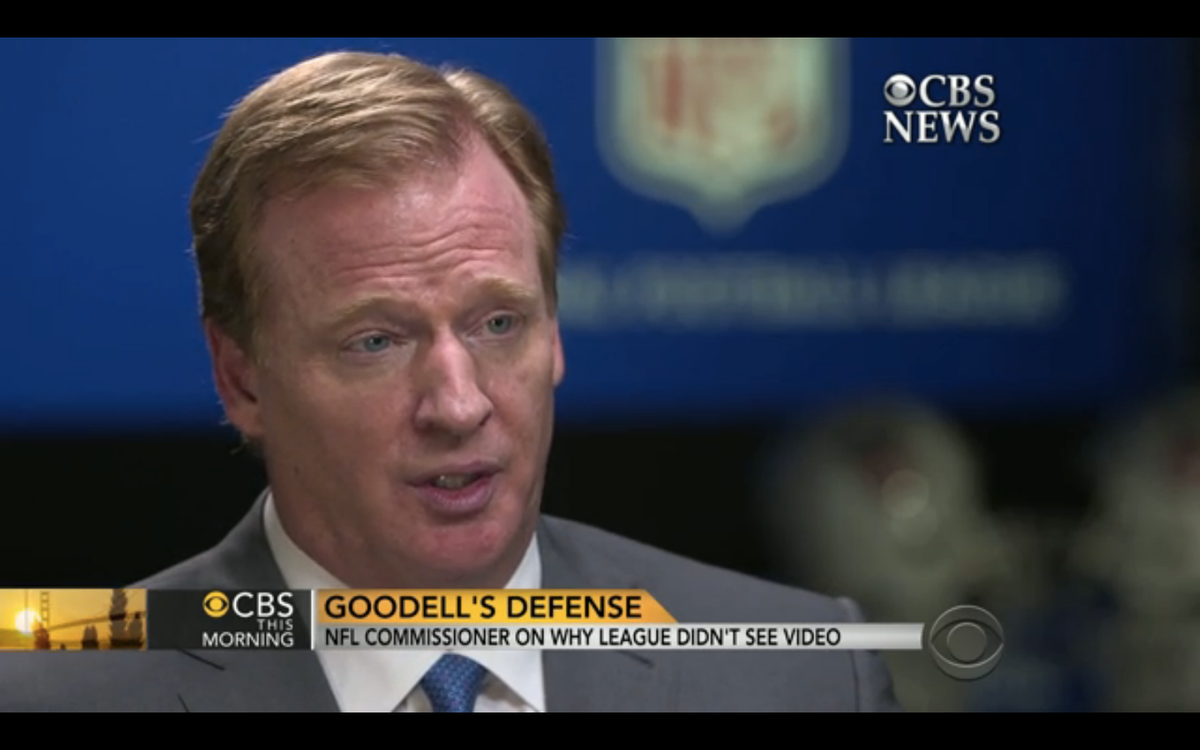 On Tuesday night, NFL commissioner Roger Goodell told CBS News' Norah O'Donnell that the NFL indefinitely suspended Baltimore Ravens running back Ray Rice after video of him assaulting his partner was released because he didn't feel that prior available evidence "was sufficient" to level such a punishment.

Asked if he wished he had seen the tape before it was made public, Goodell replied, "Absolutely."

"That's why we asked for it on several occasions," he continued. "Because when we make a decision we want to have all the information that's available. And obviously that was the -- that when we met with Ray Rice and his representatives, it was ambiguous about what actually happened."

"But what was ambiguous about her laying unconscious on the floor being dragged out by her feet?" O'Donnell countered, referencing the footage released by TMZ nearly seven months ago.

The rest of the exchange is telling:

Goodell: There was nothing ambiguous about that. That was the result that we saw. We did not know what led up to that. We did not know the details of that. We asked for that on several occasions. It was unacceptable in and of itself what we saw on the first tape. And that's why we took action, albeit insufficient action. And we acknowledge that, we took responsibility for that -- I did personally -- and I take responsibility for that now. But what we saw yesterday was extremely clear and graphic and was absolutely necessary for us to take the action we did.

O'Donnell: But what changed? I mean, on the first tape she was lying unconscious on the ground, being dragged out by her feet. Did you really need to see a videotape of Ray Rice punching her in the face to make this decision?

Goodell: No. We certainly didn't. And I will tell you that what we saw on the first videotape was troubling to us in and of itself. And that's why we took the action we took. As I've said before, we didn't feel that was sufficient, we didn't get that right. But what we saw yesterday was extremely clear, it was extremely graphic, and it was sickening.

Goodell claimed that what he saw in the video was "extremely graphic" and "sickening," which is absolutely true. But, as Amy Davidson noted at the New Yorker earlier this week, what did Goodell and the rest of the NFL think it looked like when a football player knocked out a woman?

The release of that footage (without Janay Rice's consent and at her expense) didn't change a thing about what the NFL knew. Goodell had a police report that said Rice hit Janay with his hand, "rendering her unconscious." And a grand jury indicted Rice in March for third degree aggravated assault, which in New Jersey is defined as acting with the intent to cause "bodily injury." And Goodell admitted that he had seen the footage outside the elevator, which clearly shows Rice dragging Janay's limp body like a sack of potatoes.

The video of what happened inside that elevator makes it clear that the assault was brutal, but was there any other conclusion that Goodell could have come to? "There are not that many different ways in which two people can get on an elevator, only to have one exit unconscious," Zerlina Maxwell wrote earlier this week, responding to this same point. The video changes nothing.

The interview doesn't change anything, either. It has long been clear that the NFL is indifferent to violence against women. This incident was just too much of a media headache to ignore, so the NFL acted -- belatedly, inadequately, cynically.

Rice is not the only man in the NFL who has abused women, though Goodell really wants the public to believe that's the case:

We're saying we have a problem. We have one incident, that's a problem. And what we want do is by the policy that we implemented two weeks ago and say, "We haven't done this right." We have had lots of conversations, lots of listening and learning right here in this room with experts not just in the last two weeks or three weeks or month, but over the last couple of years to say, "How can we deal with this issue better? How can we prevent the cases from happening? And when they do happen, how can we send the right message to say, 'this is unacceptable'?"

If the NFL wants to send the message that "this is unacceptable," Roger Goodell, who has been instrumental in fostering an environment of utter permissiveness around and acceptance of violence against women, should step down.

Asked by O'Donnell if he felt his job was on the line, Goodell replied, "No."