As the federal government struggles financially and cuts food stamps, here's how great U.S. companies steal from us 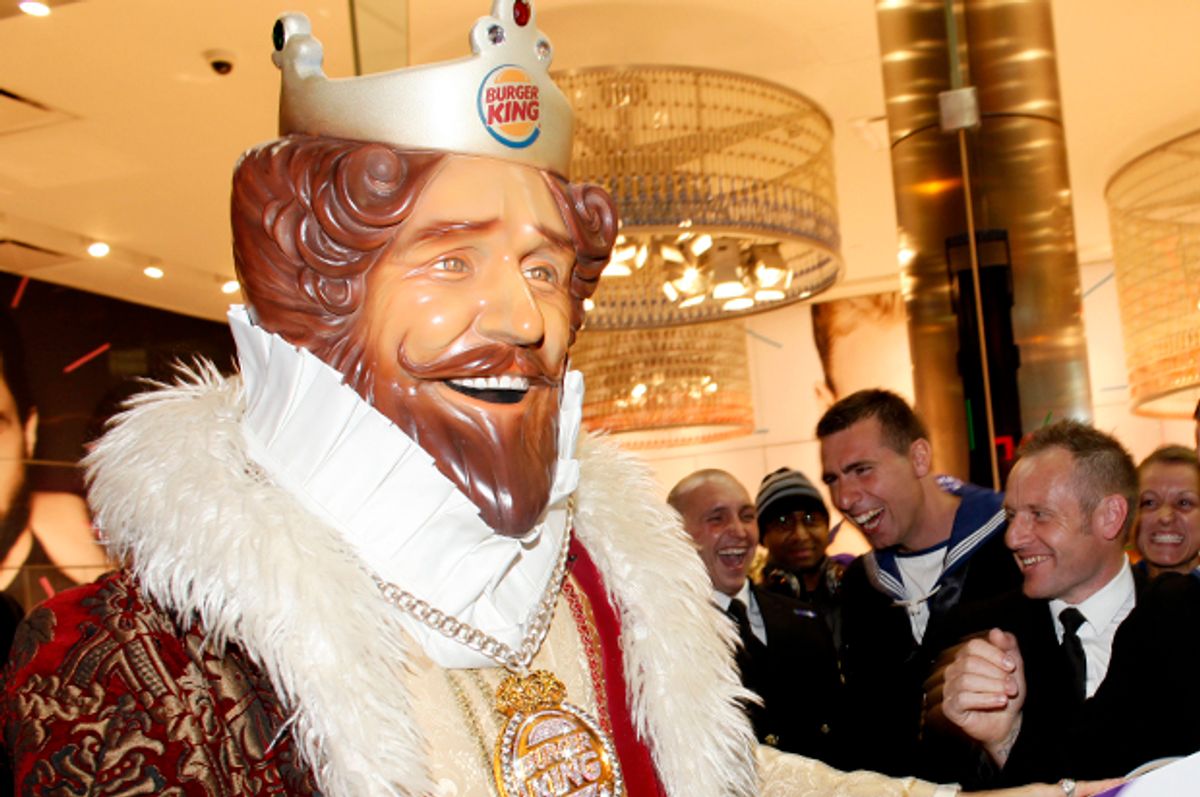 As Democrats and Republicans continue to heap abuse on one another in Washington, the U.S. corporate tax base continues to show signs of erosion. Under what is shorthanded as an "inversion," U.S. companies bed down with a foreign partner or takeover target, and live happily ever after, domiciled in a tax friendlier jurisdiction like  Britain, Ireland or even Canada.

In the latest headline-grabbing inversion deal Miami-based Burger King will absorb Tim Hortons, a Canadian coffee and doughnut chain, to create what will be the world’s third-largest fast food global corporation, with more then 18,000 restaurants in 100 countries with  $23 billion in annual sales revenue.

Back in 2010 Burger King  was bought by 3G Capital, a global investment firm, led by 75-year-old Brazilian-Swiss billionaire Jorge Paulo Lemann. Lemann, a Harvard graduate, former journalist and tennis star is ranked by Bloomberg as the 28th wealthiest man in the world, worth about $25.2 billion.

Back in 2008 Lemann and his team put together a $52 billion deal to buy out  Anheuser- Busch, the iconic American beer brand.

Just four years earlier they had parlayed their ownership  of Brazilian beer brands Brahma and Antarctica, which dominated South America,  into becoming a global player with their  takeover of Belgium-based Interbrew, makers of premium brands like Stella and Becks. From there it was just a hop, skip and a multibillion-dollar jump to global beer domination.

Today the world’s largest beer conglomerate is publicly traded as AbInBev. It has 200 beer brands with 150,000 employees based in 24 countries bringing in $40 billion in annual revenue. On its recruiting website a company video says its “dream is to be the best beer company in a better world. Better world is the way AbInBev gives substance to corporate social responsibility. Making a positive contribution to the world around us is crucial if we want our business to be sustainable and profitable in the long run.”

Lemann’s Anheuser Busch conquest was not without controversy and some patriotic hand-wringing over the globalizing of a brand like Budweiser that more than just about any other had wrapped itself up in America’s  sovereign "red, white and blue." But at $70 a share price offer, there was enough green for stockholders and the Busch family to resign themselves to this new world beer order. The consensus of the business press was that the Anheuser Busch leadership had become complacent and vulnerable to a takeover by Lemann’s A team of cost cutters, who once in control, zeroed out free beer and fancy corporate travel.

Being super-rich has its downside. Back in March of 1999 a car with three of Lemann’s then school-age children came under fire when two gunmen attempted to kidnap them off the tony streets of the Jardim Europa section of Sao Paulo. Thanks to bulletproof glass only one bullet penetrated the car, permitting the driver to elude the gunmen.  A few months after the incident, the New York Times reported the company that had bulletproofed the Lemann family vehicle saw its business triple from 30 to 90 makeovers a month.

Lemann’s latest plans to merge BK and Hortons to create a global fast food behemoth are being financed by Warren Buffet. Buffet is ranked by Bloomberg as worth $67.5 billion, making him the world’s third-richest man. Last year Lemann and Buffett  teamed up in a $23.3 billion deal to buy HJ Heinz. No doubt stockholders and the Heinz family were thrilled. Under the terms of the takeover, each share of stock brought them $72.50, a 19 percent premium over the stock’s previous high.

Lemann and Buffet’s latest "whopper" collaboration has generated negative press because it has been billed as an inversion deal, which critics say will help the new entity reduce its U.S. tax liability. In the public relations material outlining the deal there is no mention of the potential benefit of reducing U.S. tax liabilities by locating in Canada. In a press release about the transaction the company said the deal would  insure it benefits “from global scale and reach and sharing of best practices that will come with common ownership by the new company.”

“The Burger King-Tim Hortons deal actually makes sense on several levels. Scale matters. This deal delivers on that,” says Peter Kenny, chief market strategist with the Clearpool Group, a financial technology firm. “As far as tax inversion, clearly that is a net benefit of the deal. However, I don't believe it is primary. That said, the U.S. corporate tax code is exhaustively counterproductive and non competitive. Corporations have a legal obligation to increase shareholder value -- legally. It is unseemly on some level but certainly not unpatriotic. It is legal because U.S. code is so dysfunctional and non-competitive.”

The deal might have slipped through without much notice but for the recent high-profile failure of U.S. drug maker Pfizer to take over British drug maker AstraZeneca. That was followed last month by U.S. pharmacy retailer Walgreens giving up on an inversion deal in the face of a massive petition drive and political pressure for the firm to stay put here in the U.S.

But inversions are just the tip of this iceberg. Last year Sen. Carl Levin and his Permanent Sub Committee of Investigation made headlines when they produced documentation that companies like Apple had successfully used the U.S. tax code to shelter tens of billions of dollars from U.S. taxation offshore as the federal government struggled with its chronic fiscal crisis and cut food stamps.  Experts estimate that anywhere between $1 trillion and $2 trillion in U.S. multinational profits are “stranded” overseas.

For businesses there is nothing patriotic about taxes. Legally their first allegiance is to their investors and their own bottom line. If there is a way to cut what they pay in taxes they will. Hedge funds are aggressively looking for the next inversion candidates out there that can make them wealthy by skipping town. What happens if this strategy catches on? That’s not their problem.

If executed properly, companies via inversions can save billions of dollars that they won’t have to remit to Uncle Sam, plus have easier access to the profits they have had to keep offshore. The U.S. Treasury takes a hit and no doubt U.S. households will have to pick up the slack. But the inverted conglomerate is well on its way to being a highly mobile global player capable of playing nation-states off one another. Nation-states invariably respond by doubling down on competing  with each other by further reducing their taxes and loosening their regulations all in hopes of  winning corporate favor and the hope that a flood of capital will follow.

“From 1983 until 2004 there were just 29 inversions,” says James S. Henry, senior economist with the Tax Justice Network. “By 2004 and 2014 there were 47. Now 100 are pending.” Henry should know. He was the former chief economist with McKinsey and Co., the global management consulting firm, and was a vice president of strategy for IBM. Henry was also business development manager for General Electric whose spectacular ability to reduce its U.S. tax liability was described so well by New York Times reporter David Kocieniewski  back in 2011.

Henry says once governments internalize the notion that they need to placate corporate interests to prosper they will continue in a race to the bottom, which will only accelerate the rise of a global elite that puts itself beyond taxation to the disadvantage of civil society, which needs revenue.

“We have the perverse notion that countries should compete on their tax rates, not collaborate on tax enforcement,” says Henry. “The corporate dream is to be citizens of nowhere in a separate world of a transnational elite.”

The inversion craze is being used as ammunition to support rolling back U.S. corporate tax rates, which, at 35 percent, are some of the highest rates  in the world. But as David Kocieniewski’s breakthrough reporting illustrated back in 2011, and Sen. Levin’s hearing last year confirmed, U.S. corporations are paying well below that maximum rate.

Unlike many other countries, the United States also taxes the profits that U.S. corporations make overseas once they bring those profits home — hence the $2 trillion offshore stash U.S. companies have chosen to stack up rather than repatriate. In the minds of pro-business types, if the U.S. wants to be competitive it should give up on that as well.

Is there something inherently wrong with these mega deals that span national boundaries and continents? Do they, by their very scale and concentration of wealth, only make global income inequality worse?  Economist Richard Wolff,  professor at Graduate Program for International Studies at the New School, says yes on all counts.

“By definition that is the case. One corporate parent (and its shareholders) will own and operate what before were two: BK and Hortons. The fast food industry is thus more concentrated,” Wolff says. “The bigger resulting entity will likely shift its now bigger business to larger law, accounting, advertising, security, and other supply firms thereby promoting concentrations there as well.”

As U.S. corporations have become increasingly more savvy at manipulating the U.S. tax code, the burden for paying to maintain the very superpower the U.S. multinationals have counted on to maintain world order has shifted.  “Over the postwar period the burden of federal income taxes has shifted from business to individuals and from upper-income households to lower- and middle-income households,” says Wolff.

This latest U.S. corporate bolt for the door comes as the bill is coming  due for keeping the American social contract with tens of millions of baby boomers and the U.S. continues to lag in reinvesting in its critical infrastructure. Some Democrats are pushing a series of reforms that would make it harder for U.S. corporations to shed their U.S. identity. Republicans say they want comprehensive tax reform to make the U.S. more attractive to business.  But the conventional wisdom is that  Washington is too badly fractured to do anything but take a “selfie.”

Meanwhile, an army of well-funded lobbyists insure that corporate interests, both here and abroad, are protected over the broader public interest. When all else fails they will use campaign cash to close the deal. They prosper as a national government remains dysfunctionally divided because partisans on both sides hate each other more than they love the country they share.

There are loud calls for the U.S. to project its power to stabilize multiple global hot spots. Whether it be backstopping the West African nations, whose very viability is threatened by the Ebola outbreak, or countering the march of ISIS, the Islamic State in Iraq and Syria, we helped spawn, the world continues to turn to the U.S. for help. But how can the U.S. continue to afford to respond to these alarm bells if its own business elite decides to abandon it by becoming citizens of nowhere in particular?