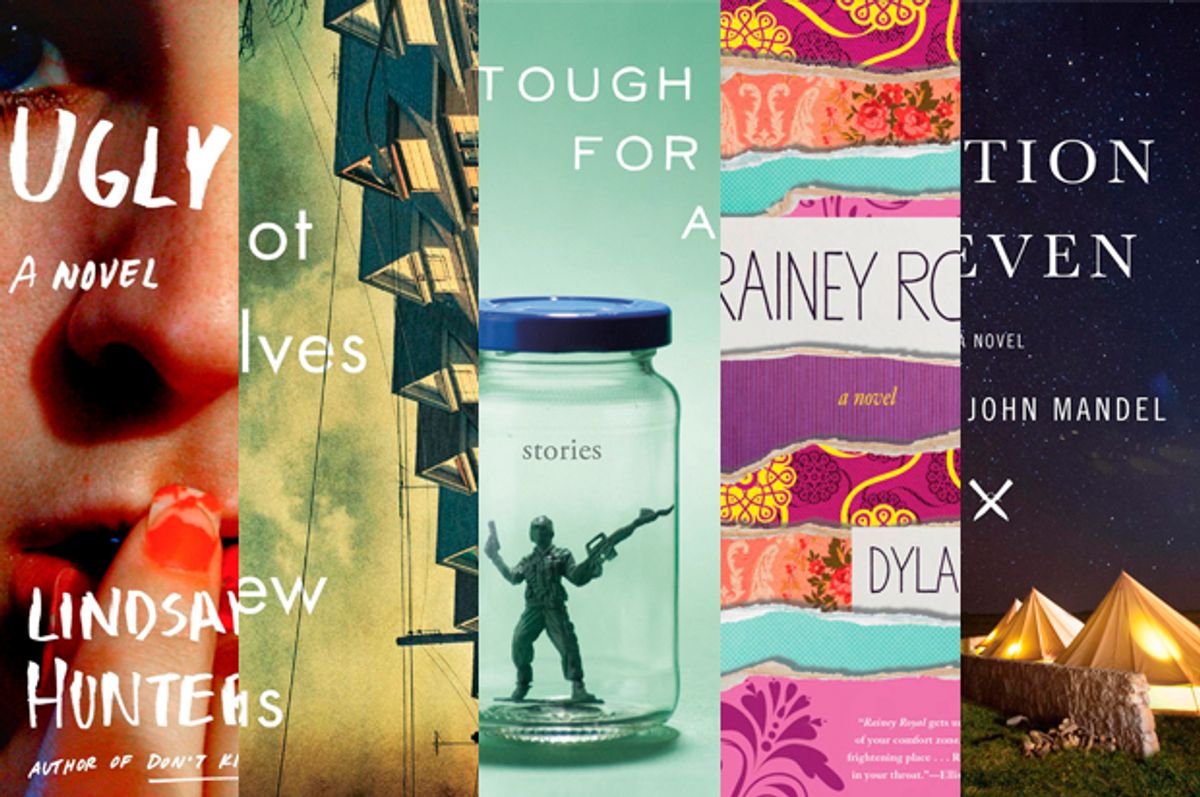 THOMAS: The persistence of hope in the face of certain defeat; the refusal to despair; a brief moment of triumph; years spent chasing an idyll; in short, an alternate history of the New York Mets.

HUNTER: The "friendship" between two teenaged girls. Acting out of desperation. Nostalgia for something that never existed. The Internet as predator. The assumptions we make and accept as fact.

WARNER: Mankind is a pestilence, bent on destroying ourselves and others, but occasionally we break free from our monstrousness and achieve something like grace. Also has a talking monkey.

HUNTER: My mother's yearbooks. 48 Hours Mystery. Keith Morrison. Fairy tales. The kind of heat you feel in August when you just get back into your car at 2:00 in the afternoon. The silence of waiting. Ugliness.

MANDEL: Post-apocalyptic novels, a 2010 book tour on the Michigan lake shore, the 1918 flu, the New York Public Theater, an unsettling moment one night in Toronto when I was nineteen and just for a second all the lights on Yonge Street blinked out, the 2003 blackout in New York City, orchestral music.

THOMAS: The scent of bitter almonds. The watery part of the world. Such wonderful shirts. Bernard is thinking of his biographer. Old father, old artificer. See the child.  These fragments I have shored against my ruins. I can’t go on, I’ll go on. The apparition of these faces in the crowd. Only connect. Isn’t it pretty to think so?

LANDIS: Loss, death, and caregiving for my parents.

MANDEL:  “Women’s fiction.” There’s absolutely nothing wrong with writing books that are aimed specifically at women. But since I don’t actually write those books, it’s impossible to interpret that label as anything other than “this book was written by a girl.”

WARNER: This book is a little too fresh for any of that feedback, but Kirkus called my novel “smug.” An Amazon reader by the handle of “Harkius” said “No one should read this.”

HUNTER: I would be the proprietor of an animal sanctuary, somewhere in the south. Or the owner/baker at a donut shop.

THOMAS: Detective. I would have to change my last name to McNulty or Moreland for this fantasy to be complete.

LANDIS: I write dialogue first; I can hear it, and for me it's the spine of a scene. Everything else needs work—plot, for God's sake, and structure.

MANDEL: I’m good at structuring books in intricate ways. I’d like to be better at character development.

WARNER: My biggest strength is my biggest curse in that I think I can write funny, but I also sometimes go for funny when there might’ve been another register that could’ve been more interesting. I’d like to be able to trust myself to write straight-up realism.

HUNTER: Precision. I'm good at choosing the right words, though my writing style is generally (and often purposefully) sloppy. I'd like to get those more in line with each other.

THOMAS: I think I can write an effective scene and populate it convincingly with objects and people, but I’d like to incorporate more of the contemporary idiom into my writing, which tends toward the atemporal, the austere. The ferocious vitality of "The Brief Wondrous Life of Oscar Wao" comes to mind. Diaz has a wonderful ear and an even more wonderful imagination for what is possible in sentences—namely, anything he wants. His work pulses with the blood of living speech, mixing high and low diction and hitting the vein over and over. Every line of that book catches me by surprise, even when I know it’s coming.

LANDIS: I believe we could not work without such hubris, yet we must bury the hubris in order to work.

MANDEL: This isn’t something I agonize over. I’ve sold four novels, which seems to me to be empirical evidence that at least some people have an interest in what I have to say. I’ve never claimed that anyone should have any interest in what I have to say. I like to write. I would write whether anyone else read my work or not. I publish my books because, practically speaking, selling my writing allows me to spend more time writing.

THOMAS: All I have to do is think back to last March, when no one but my wife and a few indulgent friends had read a word of my book.  Plus, I’m Irish by extraction. We’re not permitted to get a big head about anything. I’m not sure I do think anyone is interested in hearing what I have to say.

WARNER: My agent counseled against trying to publish this book. I just remember that and my friend “Harkius” whenever I feel myself outswelling my britches.