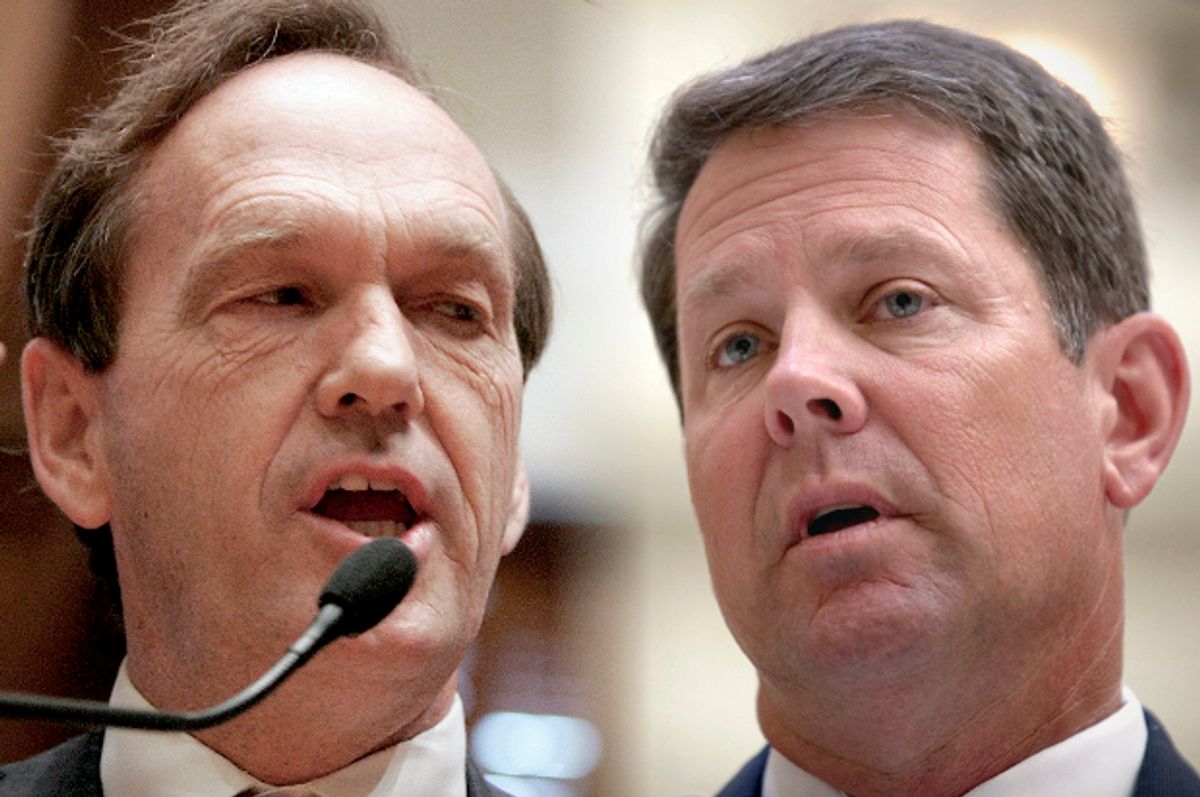 Georgia Republicans are anxious. The bright red state stays that way because African-Americans and Latinos are less likely to vote than white people. Democrats are trying to change that this year – Michelle Nunn has a decent chance of picking up a Republican-held Senate seat, while Jason Carter threatens Gov. Nathan Deal -- and the GOP is fighting back.

State GOP leaders are ever more openly admitting that they’re threatened by black voter participation. And now the state’s top election official, caught on tape warning that turning out “minority voters” is the key to a Democratic victory, is accused of harassing a key voter registration project run by the pastor of Dr. Martin Luther King Jr.’s Ebenezer Baptist Church and an African-American state legislator.

Earlier this week state Sen. Fran Millar got national attention when he railed against a decision by Atlanta's DeKalb County to expand Sunday voting and open a new polling place at a shopping mall near black churches. “How ironic! Michele [sic] Obama comes to town and Chicago politics comes to DeKalb,” Millar railed in response, calling the move “blatantly partisan.”

Of course Sunday voting is a national phenomenon, available to citizens of all races – although it must be said that once black churches began to organize “Souls to the Polls” events after church, it suddenly became controversial on the right, and states like Wisconsin have limited it sharply. The spectacle of pro-Christian Republicans trying to keep other Christians from voting has always been vexing, and it’s hard to conclude it has to do with anything but race.

Criticized for his reply, Millar didn’t back down, posting on Facebook: “I would prefer more educated voters than a greater increase in the number of voters.” Yes, that does imply he thinks black voters are less educated. He added: “If you don’t believe this is an effort to maximize Democratic voters, than you are not a realist. This is a partisan stunt and I hope it can be stopped.”

But Democrats see a partisan stunt in a move by GOP Secretary of State Brian Kemp to subpoena the records of the New Georgia Project, the state’s largest voter registration effort, alleging the group has committed voter fraud.  And by records, Kemp means every imaginable record – you can see the subpoena here. It could tie up the group indefinitely.

New Georgia Project co-director Stacey Abrams, the House minority leader, says that out of 85,000 registrations, the group was aware of roughly 25 complaints about incomplete forms. “The complaints we were aware of, we’ve worked very closely with the secretary of state’s office to resolve,” Abrams told the Atlanta Journal Constitution. “In fact, the first time there was a complaint, I personally called [Kemp] and told him about our project, because I wanted to make sure we were working with the secretary of state’s office to get this work done, given how massive a project this would be.”

“We’re just not going to put up with fraud,” Kemp told a local television station. “I mean, we have zero tolerance for that in Georgia, so we’ve opened an investigation and served some subpoenas.”

Better Georgia has come up with audio of a July speech by Kemp to GOP supporters, in which he raised the specter of the defunct community-organizing group ACORN and warned that Democrats were pinning their hopes on “minority voters”:

Ironically, Kemp seems to be reassuring the group that voting restrictions passed in the wake of ACORN, including voter ID, prevent the sort of voter fraud he believes ACORN was promoting. And he closes his remarks with a warning:

You know the Democrats are working hard, and all these stories about them, you know, registering all these minority voters that are out there and others that are sitting on the sidelines, if they can do that, they can win these elections in November.  But we’ve got to do the exact same thing.

There’s nothing wrong with Kemp noting the Democrats’ plans to register “minority voters,” of course. Those plans are public. But when he’s obstructing an African-American-run voter registration project less than two months before the midterms, it’s hard not to wonder which hat he’s wearing: responsible election official, or desperate GOP partisan?

“GOP candidates in Georgia know they cannot win if the electorate reflects the increasing diversity of our state, so Sec. Kemp is using the power of his office to restrict minority voting access,” Better Georgia’s Bryan Long charged in a statement. He’s asking for a Justice Department investigation. Stay tuned.