"Who Is John Galt?" is a lurid pageant of right-wing propaganda -- and proof of Rand's weirdly enduring influence 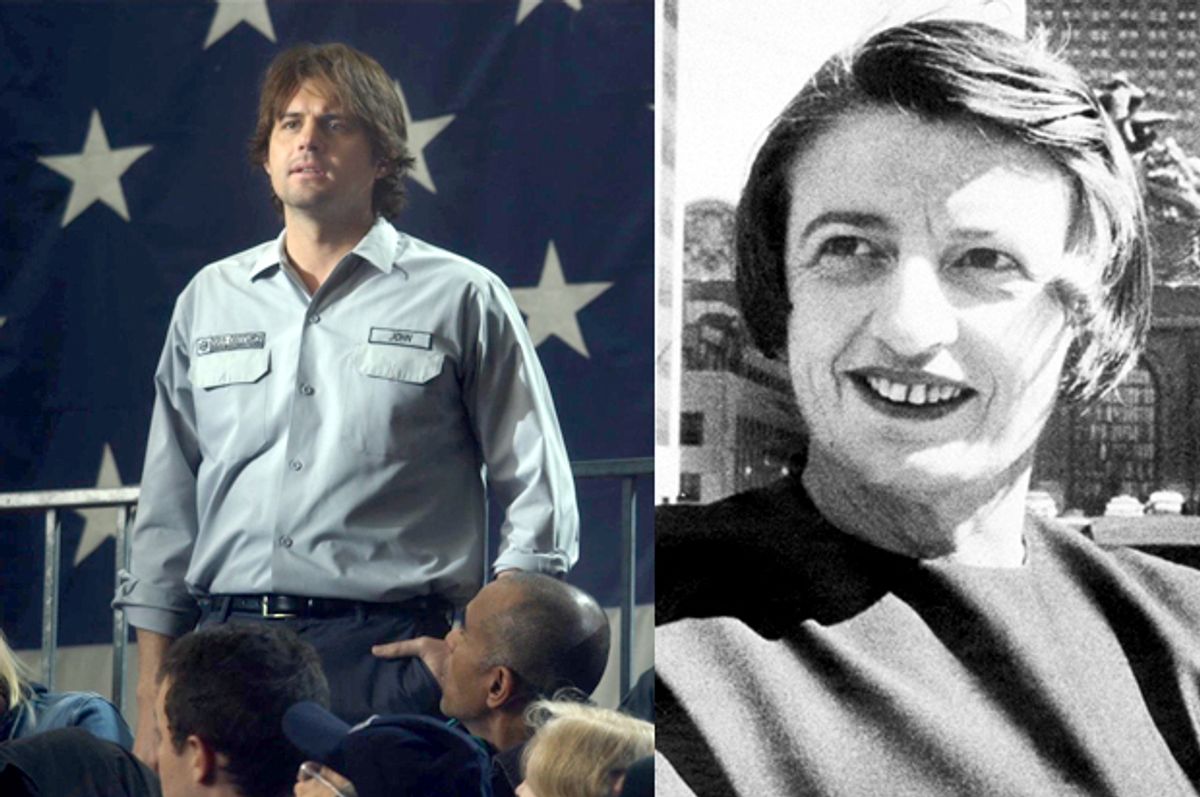 Here’s what I think happened. I think Rush Limbaugh had a lousy day at the office and drowned his sorrows in bad Mexican food — something along the lines of three El Charrito’s Enchilada Grande packs — and then I think Rush fell asleep on his sofa and had a beautiful dream.

In this dream, all the most powerful and talented Americans finally get fed up with big government and its bureaucratic parasites and follow a hunky guy named John Galt to a gorgeous valley in Colorado, where together they declare themselves on strike against the government. This means they get to live in harmony and throw awesome Caucasian dinner parties and invent miraculous technological devices and pay for everything with shiny gold coins.

And because this is all happening inside Rush Limbaugh’s mind — with its misty yearnings for underage third-world prostitutes and endless Oxycontin — the production values of this particular dream have the quality of an off-brand soap opera.

It’s all pretty awesome. Weaselly government leaders meet in back rooms filled with cigar smoke to plot new ways to steal money from rich people and nationalize industry and force scientists to invent torture devices so as to control the population. Then they swish brandy around in snifters and blow smoke rings.

Meanwhile, back in paradise, this hot babe named Dagny, who runs American’s only remaining train company, crashes her plane and John Galt finds her and carries her back to his pad where he doesn’t have sex with her — not just yet. First, he’s got to introduce her to all his badass friends, like the doctor who examines her with his killer new medical gizmo and says, “It’s amazing what can be accomplished without red tape!” Or the mom who explains that she’s home-schooling her kids because “I wouldn’t put them in an educational system that doesn’t teach them to think.” That’s maybe the coolest thing about this particular utopia: Everyone speaks in Republican National Committee talking points.

Unfortunately, Dagny has to leave paradise before she even gets to have sex with John Galt, because the government has nationalized her train company and is running it into the ground. Bummer. In fact, the entire country is falling to pieces without men like Galt, who is both a brilliant engineer and a professional hair model. But that serves America right because, as Galt explains, “the powerful try to make us feel guilty for our success.” And that is so totally not cool.

Alas, Dagny leaves the valley and heads back to grubby old America and it’s just as poorly lit and effed-up as you’d expect, though she does get to have sex with John Galt (who comes to rescue her), an act of coitus that is performed on her desk. This sort of eases the comedown of living in a reeking dystopia.

Then John Galt gives a big speech on TV during which he asks some tough questions of the American people, who are mostly huddled outside pawn shops staring at televisions through the security bars. “Have you noticed that as everything in your world seems to decline, one thing still grows?” he asks. Everyone kind of nods. “It is the power of your rulers. None of their plans and directives have solved your problems or made your life better. The only result has been the increased control over you at the cost of your freedom.” He goes on to explain how business leaders got tired of being called “greedy exploiters” and decided to follow him. Why? Because they finally “recognized the honor they deserved and rebelled against the guilt you wanted them to feel.”

It’s not exactly “The Gettysburg Address,” but the media response is off the charts. Sean Hannity appears on-screen, looking engorged with gravitas. He loves the speech. Glenn Beck salutes Galt’s moxy. Ron Paul arises from his Cycronic crypt to predict the End Times, which is sort of a reflex at this point. The crowds outside the pawn shops start chanting John Galt’s name. It’s a movement.

Naturally, government thugs capture Galt and drag him to a secret lab where they strip off his shirt and punish him using their special new Torture Machine, which involves a lot of sparks. Galt looks a lot like Jesus Christ, if you can imagine Christ with stubble and chinos. But then Dagny and her pals rescue Galt and all the ubermenschen fly off together to their mountain hideaway where, Rush is pretty sure, they eventually build a PGA-quality golf course and hire Playboy Bunnies to wax your balls.

Except — spoiler alert! — Rush wakes up before this last part can happen. Worse yet, he has diarrhea. The beautiful thing is that even in the midst of his diarrhea, Rush is able to get online and right there in his email in-box is an invitation to the premiere of the new film, "Atlas Shrugged III."

And now El Rushbo realizes why his dream felt so gosh darned familiar: because it’s the plot of the third and final part of Ayn Rand’s 1957 potboiler, which will debut tomorrow, Sept. 12, mostly in those precincts of the country where citizens still call the Civil War the War of Northern Aggression.

Back in 2011, when the first installment came out, most reviewers agreed to regard it as a “major motion picture,” though it was funded not by a studio but by an exercise machine mogul named John Aglialoro. As a piece of art, and a form of entertainment, "Atlas Shrugged I" flopped hard.

But if there’s one thing the conservative movement of this country has proved, it’s that it can move even the most imaginatively inert product. With the ardent promotional support of Fox News and the Tea Party’s corporate arm, the film managed to earn out in video. And thus we got a second "Atlas," with an all-new cast and even lower production values. This final chapter has an exhausted, obligatory air. It’s like watching the final phases of a botched plastic surgery.

The director — and co-writer — is a man named James Manera, whose previous work includes a documentary about music and an episode of the television show "Nash Bridges," which he directed in 1996. I think I’ve said enough about the movie.

The larger curiosity here is Ayn Rand herself. It would be easy to write her off as a demented Cold War hack no longer relevant to our cultural and political discourse. But that would be a huge mistake. Because Rand’s slobbering conception of laissez-faire capitalism is not only alive and well, it remains a galvanizing ideological force.

Consider the young darling of conservative circles, former vice-presidential candidate Paul Ryan. Ryan worships Rand. He once gave a speech confessing that he went into public service because of her. He also asked his staffers to read her novels, so they could learn about the free market. During the 2012 campaign, Ryan did a good job of playing down his devotion, because Rand was an atheist.

But her fingerprints are all over his famous Budget Plan. To the “takers” in our society — the aged and the sick — Ryan would provide rationed healthcare. Federal budgets for education, transportation, energy and veteran services would be slashed. The rich, meanwhile, would be handed billions in tax cuts.

The whole idea is to do like John Galt says: obliterate any restraints on personal greed. The Ryan Plan is a document so enthusiastic in its fraudulence, so casual in its cruelty, and so certain of its own virtue that it could only have been dreamed up by a man born into money, educated by Ayn Rand, and given finishing lessons in Congress.

For all the low-budget absurdity of this new movie, the famous speech Rand penned for John Galt back in 1957 still stands as the Rosetta Stone of modern conservatism. This country wasn’t built by men who sought handouts! Sweep aside those parasites of subsidized classrooms! On and on Galt yammers, forever propelled by grievance and self-pity.

His vision of capitalism is a cartoon that plays over and over again on Fox News: no poverty or environmental ruin or lack of equal opportunity. Mercy is a mug’s game in this world, a false impulse. The pursuit of wealth, by contrast, is a form of heroic purity. If only bureaucrats would get out of the way, our intrepid industrialists would beat a path to paradise and leave the moochers to rot. Rand’s mission — now taken up by Ryan and company — is to present capitalism not as an economic philosophy, but an impeccable moral system.

The writer and critic Gore Vidal characterized the philosophy of Ayn Rand as “nearly perfect in its immorality” and a number of critics described "Atlas Shrugged" (the novel) as a narrative driven by hate.

But my take on the book, as well as the movies it spawned, is just the opposite. For all the contempt that Rand (and Galt and Ryan) aim at the government, the predominant emotion they express is one of unbridled self-love. Rand herself was a kind of golem of narcissistic excess, a woman with delusions of grandeur. And she tapped into the crushing insecurity of the wealthy, the manner in which they must constantly remind themselves how much they deserve their privilege.

What animates these people and drives their chintzy propaganda isn’t rage at all, but a kind of annihilating self-hatred.

It’s not just a movie to him. It’s a dream come true.