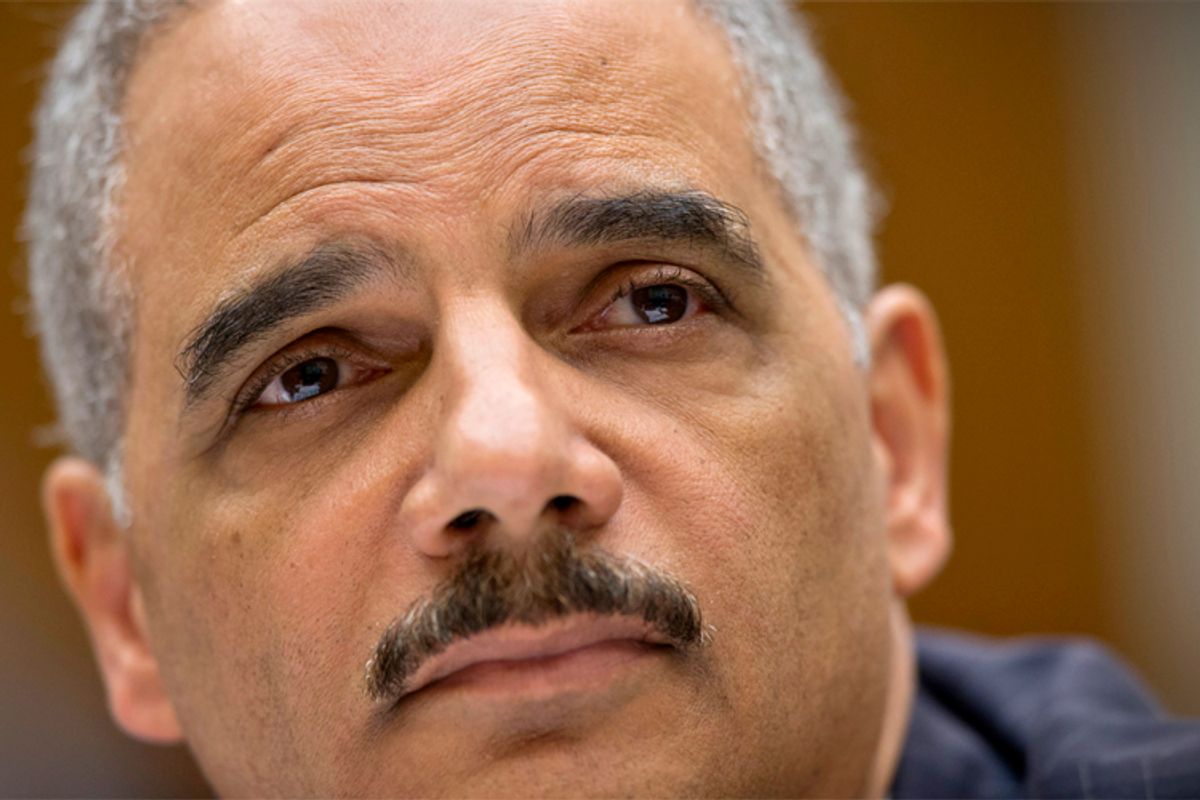 President Obama just announced war (of sorts) in the Middle East -- but he's not going to wait for congressional authorization to go to war. But that's not the only area where the president is threatening to make Congress an afterthought.

In spite of reports that the bill may not get a vote before November's elections, supporters of the USA Freedom Act have done several interesting things to push its passage in the last weeks.

The only major changes from the House version of the USA Freedom Act the letter fully endorsed were its transparency provisions.  The letter made it clear it would not adhere to the Senate bill's stricter definition of the terms used to conduct queries. It used broader language to refer to the bill's new phone records provision than the bill does. And it signaled that the administration would not share all communications with the FISA Court Advocate, as envisioned by the bill. In other words, it largely endorsed the House bill, not the Senate one, and made it clear that where it could, the administration would treat the bill as if it were the House bill.

Then, on Monday, industry organizations for the tech industry released a letter urging Congress to pass the bill quickly. The letter described how disclosures onto the spying the tech companies had been involved with "have led to an erosion of public trust in ... the U.S. technology sector." Because of the disclosures, it continued, "U.S. technology companies have experienced negative economic implications in overseas markets."

Then the tech company letter made claims about the bill that are patently false -- such as that it will "prevent the bulk collection of Internet metadata, call detail records, and other tangible things." The bill definitely limits how the government collects Internet metadata and call detail records in the United States, though it will permit the ongoing bulk collection of "other tangible things" -- such as credit card records, purchases of some beauty supplies, and money transfer records -- under Section 215. More important, the bill does nothing to limit bulk collection of Internet metadata and call detail records overseas, which the government conducts under presidential authority. There's no reason, then, that the USA Freedom Act should alleviate any concerns of the foreign customers the tech companies claim to be primarily interested in.

One thing the tech company letter made no mention of, however, is that the bill provides them with expansive immunity -- they don't even have to be operating in good faith to be immunized from prosecution! -- and new authority to get paid for helping to spy on Americans.

Perhaps the most interesting development, however, came when Clapper's office decided to unilaterally declassify new passages from a memo then Assistant Attorney General Jack Goldsmith wrote in 2004 to authorize the president's domestic wiretap program, which President Bush operated in various forms from 2001 to 2007, and which has been replaced by the Patriot Act and other laws. Clapper released very little newly declassified information, aside from the program name, "Stellar Wind," repeated over and over again. The sole substantive new disclosure revealed Goldsmith's assessment that both the phone and Internet dragnets as the government operated them in 2004 were -- are -- constitutional.

As part of the confirmation process for CIA general counsel Caroline Krass late last and early this year, Senate Intelligence Committee member Ron Wyden raised this memo, asking about its discussion of the phone dragnet. Wyden asked whether the memo had been withdrawn; Krass made it clear it had not been. But, she assured Wyden, any "continuing NSA collection activities ... do not rely on the advice of the opinion."  The exchange made it clear Goldsmith's analysis remained active -- and the government could rely on it if it had to -- but it wasn't currently doing so.

In other words, just as the Senate started ramping up to consider the USA Freedom Act, the administration provided proof that it believes it can conduct at least the phone dragnet, with or without Congress' blessing.

It's a provocative thing to do, particularly given that details in the USA Freedom Act make it clear the government has no intention of halting a number of abusive spying programs. For example, even without Clapper's letter, the bill permitted the government to use a corporate identity -- such as Western Union -- to conduct bulk collection of non-communication customer records. The transparency provisions require no reporting for Section 215 collection that doesn't obtain phone or Internet records, so the government would be able to pretend this bulk collection wasn't going on.

Finally, the bill exempts the FBI from counting the "back door" searches it conducts -- warrantless searches of Americans' content collected under the PRISM program. The FBI conducts these searches during its "assessments," even before it has enough solid evidence of wrongdoing to open an investigation. It also uses assessments to find potential informants and to profile communities. By exempting the FBI from counting these searches, then, Congress would effectively be saying it doesn't think the FBI should have to keep track of the number of times it accesses the content of innocent Americans' communications with no warrant.

In short, the bill only changes one of the most abusive domestic programs the government uses to spy on Americans. It leaves at least three more untouched (plus collection under presidential authority overseas).

Given the administration's emphasis that it believes it can conduct the phone dragnet even without Congress, this is provocation. Effectively, the bill would permit the government to continue to engage in probably unconstitutional spying, with Congress' rubber stamp.

That's why the immunity for the providers is so important. The government claims it can conduct dragnet collection of all of America's phone records without sanction from Congress. But it can only do so if the telephone companies willingly turn over the data (or if, as it does with much Internet metadata, it just takes it overseas). If Congress gives the providers this broad new immunity, then the government can do this dragnet -- and any more exotic programs it comes up with. But if Congress doesn't give this immunity, the providers are going to think twice before handing over your data.

The administration is basically demanding that Congress serve as nothing more than immunizers and paymasters for what is probably unconstitutional spying on Americans. The same thing it is doing, thus far, with war against ISIS! And the Senate is rushing toward doing just that.

Thirteen years ago, terrorists attacked this country. They attacked it, hoping to push the United States to change its ways. In the interim, the U.S. has tortured, attacked with drones -- even American citizens -- embraced indefinite detention, and -- directed against its own people -- engaged in dragnet surveillance.

One thing we swore we would not do is lose America's freedoms and constitutional powers.

Congress needs to do more than rubber-stamp a system of abusive spying. And the executive needs to recognize it can defend both the country and American liberties. We're fighting terrorism. But we're also fighting to ensure we remain America.