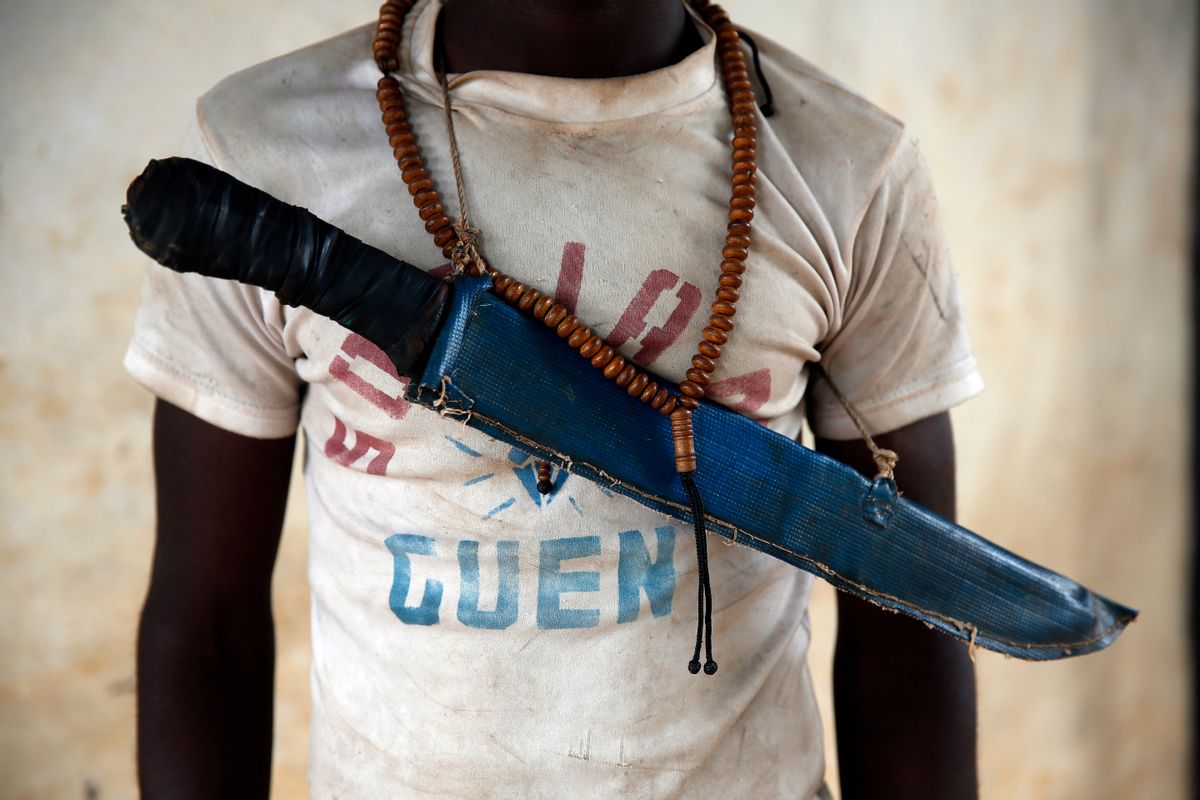 In this April 15, 2014 photo, an Anti-Balaka Christian fighter stands on the front of a looted Muslim store in Guen, some 250 kilometers north of Bangui, Central African Republic. As U.N. peacekeepers prepare to go into the Central African Republic to take over a regional mission, the death toll since fighting between Muslims and Christians started in December underscores how the aid is coming too late for thousands of victims. (AP Photo/Jerome Delay) (AP)
--

The AP found at least 5,186 people were killed in fighting between Muslims and Christians, based on a count of bodies and numbers gathered from survivors, priests, imams and aid workers in more than 50 of the hardest-hit communities. That's more than double the death toll of at least 2,000 cited by the United Nations in April, when it approved the mission. There has been no official count since.

U.N. peacekeepers prepare to take over from African forces on Monday, bringing about 2,000 extra troops to the country. That will fall short of the almost 7,000 more that were authorized in April, with the rest expected by early 2015. Yet violence in the Central African Republic has only spread since.

"The international community said it wanted to put a stop to the genocide that was in the making. But months later, the war has not stopped," said Joseph Bindoumi, president of the Central African Human Rights League. "On the contrary, it has gotten worse."

The U.N. is not recording civilian deaths on its own, unlike in Iraq or Afghanistan, and has cited figures gathered by the local Red Cross.

It has taken months simply to gather troops from different countries for the mission launch on Sept. 15, especially with poor infrastructure in landlocked terrain, said Stephane Dujarric, spokesman for the U.N. secretary-general.

"Mobilizing troops for peacekeeping mission takes time because it's not like they're waiting in New York for us," Dujarric said Wednesday. "We have to go knock on doors for troops, for equipment, helicopters..."

Many deaths in this country of about 4.6 million were never officially counted, especially in a vast, remote swath of the west that is still dangerous and can barely be reached in torrential rains. Other deaths were overlooked by overwhelmed aid workers but registered at mosques and at private Christian funerals. Even the AP tally is almost certainly a fraction of the true death toll.

The conflict started when Muslim rebels captured the capital last March and killed hundreds, possibly thousands, of Christians. When Christian militias forced the rebels to withdraw in late January, they killed as they went.

In the tiny, mostly Christian village of Nzakoun, the rebels set ablaze more than two dozen houses in early February and then went door-to-door. One 13-year-old boy, Maximin Lassananyant, stumbled out of his hut into the darkness and hid for two days in the bush, petrified. He left only when other survivors found him and told him it was time to come home and bury his family.

Maximin's hands still shake as he tries to write down their names, and he cannot bring himself to say them aloud. A village chief has printed the names of 22 buried victims on a weathered piece of notebook paper. Maximin's mother, Rachel, is No. 11 on the list of females, and his 5-year-old sister, Fani, is No. 13. His 7-year-old brother Boris is on the list of males.

It was only a matter of time before Christian militias took revenge and in turn killed thousands of Muslims. Muslims make up about 15 percent of the country's population, and Christians 50 percent.

In the town of Guen, Christian fighters stormed a house where dozens of Muslim men and boys had sought refuge, according to survivors. The fighters herded the Muslims to a shady lawn beneath two large mango trees, ordered them to lie on their stomachs and shot them, one by one. The 43 people dead included two 11-year-old boys.

The lives of three Muslims in town were spared: They transported the bludgeoned bodies to two mass graves on a wooden stretcher.

A villager named Abakar lost four sons between the ages of 11 and 16, and sobs so hard at the thought of his boys awaiting death that he cannot speak.

"Each night before I go to sleep I pray to God that I don't have nightmares about that day," he chokes out, too afraid to give his full name in case the militants come back.

Edmond Beina, the local leader of a Christian militia, is unrepentant. Everyone killed that day was a Muslim rebel, he says. Even the children.

The violence is now bubbling up in previously stable corners of the Central African Republic, hitting both Christians and Muslims. In Bambari, northeast of the capital, at least 149 people were killed in June and July alone, according to witnesses. In the Mbres area, Muslim rebels left at least 34 people dead in August.

In the tiny enclave of Boda, there are grieving fathers everywhere.

Abakar Hissein, a Muslim man, has lost two sons, both shot to death — Ahmat earlier this year in Bangui and Ali on Aug. 20 in Boda. His wife has been missing for five months and does not know Ali is dead.

"Somehow I was able to carry his body back in my own arms, but it was very hard for me," he said. "I was truly in shock."

Even in death, there is no peace for the victims.

Earlier this summer, a Muslim man was buried at a cemetery in Boda, just a mile away from the zone where Muslims are barricaded.

Later that evening, after the sun set, his body was dug up from the ground and set on fire.