Cecily Strong canned from "Weekend Update": Why she got screwed

Colin Jost and Strong weren't working as a pair. But was this the best way to fix it? 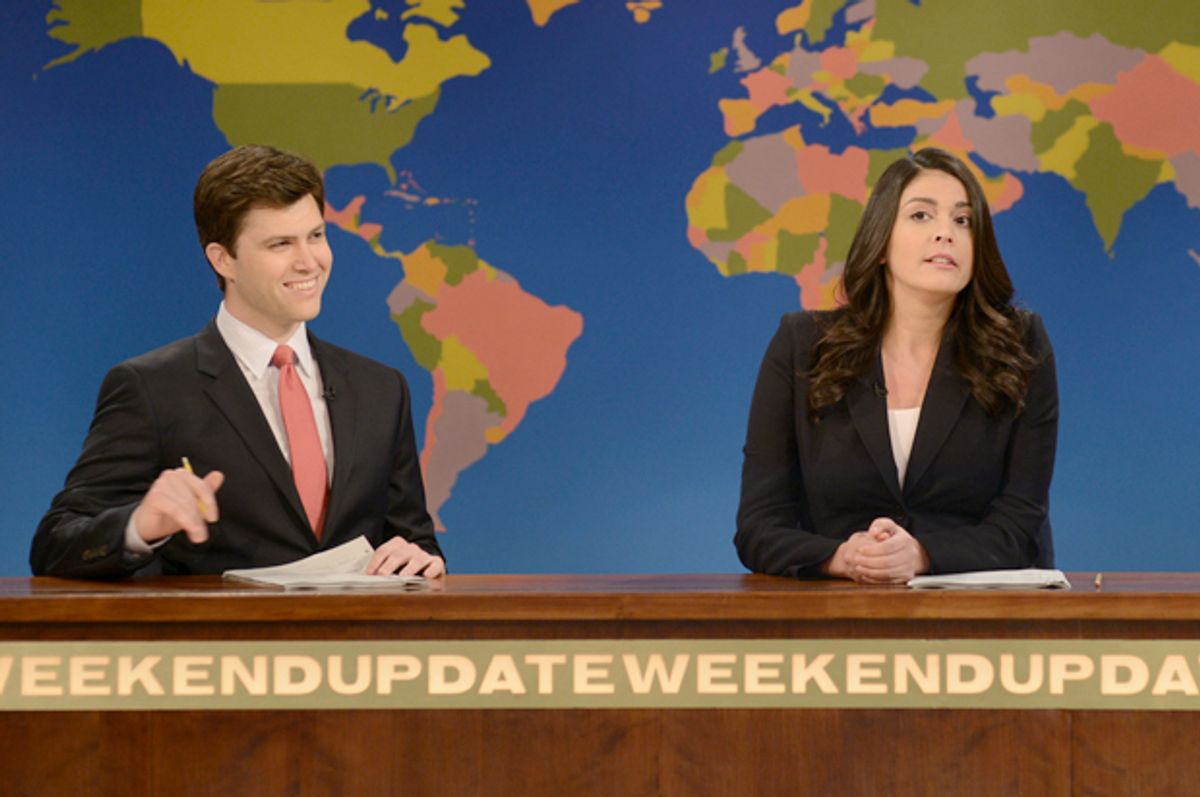 Lorne Michaels has made official another change in the upcoming 40th season of "Saturday Night Live": The producer tells the New York Times that he is replacing "Weekend Update" co-anchor Cecily Strong with "Daily Show" correspondent Michael Che. Strong's counterpart at the fake news desk, Colin Jost, will remain in place.

This came as a surprise to many loyal "SNL" viewers, but it was understandable that the Update desk would get shuffled. "Weekend Update," which prior to Seth Meyers' departure had been anchored by Meyers and Strong as a team, had really not been working with Strong and Jost. But if there was a weak spot, it had been Jost, who swallowed punch lines and smirked through lame material as though he'd taken the first few weeks of classes at the Seth Meyers School of Insouciant Attitude but skipped the session on joke delivery. Of course, part of the problem was surely just nerves, but something wasn't quite right.

The pairing of Che and Jost is the first ever team of two men -- a surprising choice at a time when female cast members (including Strong, Kate McKinnon and Aidy Bryant) have largely been carrying the sketches. It's apparently the result of a lengthy audition process, and, per Michaels, will have the happy consequence of allowing Strong to appear more frequently in sketches.

That will be welcome -- Strong's appearances as a guest on "Weekend Update," in particular, were bright spots -- and keeping Jost as a co-anchor makes sense. He's the head writer of the show, and it might be impolitic to unseat him from his on-camera gig. And despite the fact that he chooses to represent himself on social media with some of the worst jokes in the world, Jost is clearly an accomplished writer.

So why is he so bad on camera? It feels as though, rather than allowing "Weekend Update" to evolve with new hosts, Lorne Michaels wants to keep it in the key of Seth Meyers. Meyers had a particular sort of self-aware smarminess that he completely sold, and one that Jost seems to be trying to adopt. The segment had changed gradually each time it was transferred (from its Fey/Fallon era to Fey/Poehler to Poehler/Meyers to Meyers alone), but had in the five years Meyers was a solo anchor gotten fairly set in a certain mode. When Meyers hosted with Strong, she was more or less playing catch-up; the show was one with a host and a sidekick. When Strong and Jost hosted together, both seemed to be trying to play straight men rather than playing off each other.

So what was to be done about the chemistry problem between Strong and Jost? Perhaps with a bit more time, the pair could have found a rhythm that worked. It would have required letting go of the ease of nostalgia for "SNL"'s recent past, something that gets harder and harder as young alums crowd the TV landscape. If Jost, with a little more time, could have tried to be something other than a Meyers manqué, Strong might have had a little more space to breathe. As it stands, we can look forward to her return as the Girl You Wish You Hadn't Started a Conversation With at a Party, but with the uncomfortable knowledge she was uninvited from the party halfway through.