Fox's crazy new Benghazi blitz: Why it's desperately clinging to its favorite conspiracy

GOP hearings and a new Fox special breathe life into Benghazi, as the "stand down" conspiracy melts away 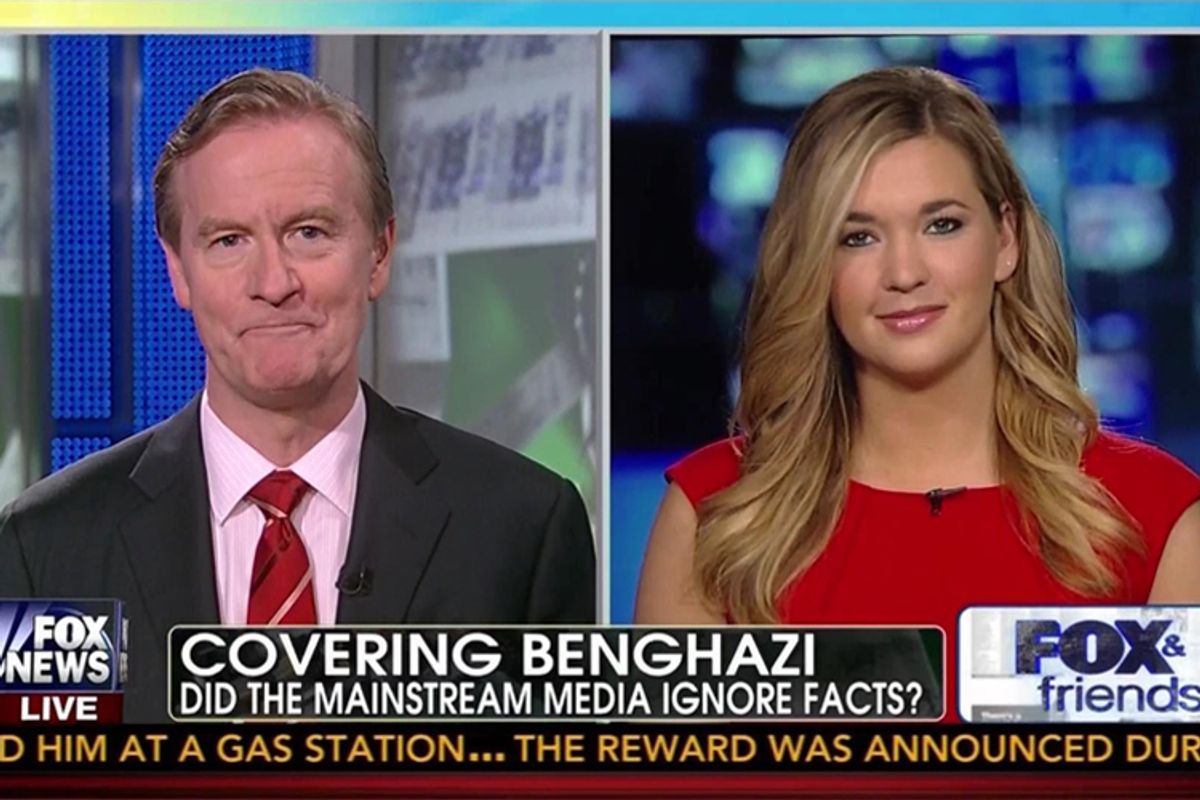 If you’re like me, and I sincerely hope you’re not, then you devote a few seconds of each day to Googling “Benghazi” just to see what new outrage is bubbling up from our friends in the conservative media. Yesterday was the second anniversary of the attack, which is a noteworthy observation in and of itself since we don’t make it a regular practice of commemorating the anniversaries of attacks on U.S. diplomatic facilities. But Benghazi is different – its memory is kept determinedly alive by conspiracy-minded Republicans and conservatives who see the potential for political gain in the trumped-up scandal.

Anyway, the occasion of the attack’s second anniversary gave rise to this headline from Fox News, the conservative media’s buzzing hive of Benghazi activism:

Anyone who is familiar with Benghazi “reporting” knows that this is the preferred angle for conservatives covering the story: We are talking about Benghazi because there are still no answers (the multiple congressional investigations, State Department inquiry, and months-long journalistic deep-dives into the attacks notwithstanding). Indeed, for an ostensible news outlet like Fox News, which has devoted countless hours to covering the story, to say that they still don’t have answers after two years of investigating, you have to wonder when headlines like this start being viewed as admissions of incompetence.

But again, this is all about keeping Benghazi alive as a political issue, and after a summertime lull in Benghazi coverage, it’s coming back to the fore thanks to a new Fox News special (the third such “special” program the network has produced on the attacks) and the first hearing of the Benghazi Select Committee, scheduled for next week. To mark the return of Benghazi-mania, it’s worth pointing out just how much the scandal narrative that surrounded the story at its inception has been degraded as time has passed and conservatives have had more difficulty filling information gaps with their own wild theories. And we’ll do so by focusing on one of the more scandalous allegations to emerge: the infamous “stand down” order.

Fox News first broke the “stand down” story on Oct. 26, 2012. It’s gone through several twists and turns since then, all of them assiduously chronicled by the Washington Post’s Erik Wemple. The crux of Fox’s story was straightforward: Upon receiving a distress signal from the Benghazi diplomatic compound, a team of security operators at the nearby CIA annex tried to respond, but were ordered to “stand down” twice by “the CIA chain of command.” The operators eventually ignored the order and moved out on their own.

The context in which Fox News reported this news made the story explosive – at the time, the going theory among Republicans and conservatives was that the Obama administration purposefully let the people under attack at the diplomatic compound die as a matter of pre-election political expediency. That’s an altogether monstrous accusation that doesn’t make any actual sense, but such things happen in politics. And it wasn’t just the online crazies saying it – here’s Peggy Noonan in May 2013:

Far worse is the implied question that hung over the House hearing, and that cries out for further investigation. That is the idea that if the administration was to play down the nature of the attack it would have to play down the response—that is, if you want something to be a nonstory you have to have a nonresponse. So you don't launch a military rescue operation, you don't scramble jets, and you have a rationalization—they're too far away, they'll never make it in time.

Fox’s “stand down” story confirmed what they already believed – that the administration deliberately withheld assets as part of a scheme to “play down” the attacks. And that’s exactly how the story played out. Rand Paul put out a statement on Oct. 26, 2012, blasting the administration and citing reports “that CIA and special forces that may have been able to help were told to stand down and not intervene.” Fox News interviewed Donald Rumsfeld in May 2013 and asked him “who would give the ‘stand-down’ order to save or not save those four people who were fighting for their lives for nine hours?” According to Rummy, “it would have to come either from the president or someone acting for the president.” Last June, Fox put together a Benghazi special that asked: “How could Americans be left so vulnerable in such a dangerous place? Did their government leave them to die?”

Then it all started falling apart. None of the various inquiries by Congress (by both Democrat- and Republican-led committees) found any evidence that an order was given to “stand down.” Congressional Republicans interviewed CIA officers on the ground in Benghazi that night and found that the security operators on the ground were not told to not intervene – they were told to wait until intelligence could be gathered and local militias enlisted to help, according to a December 2013 AP report.

This leads us to the “new” revelations hyped by Fox News’ Bret Baier during his most recent Benghazi special. Baier’s program focused on a new book co-authored by commandoes who were on the ground the night of the attack, and they claim that a CIA station chief did, in fact, order them to “stand down.” Smoking gun proof, right?

Not so much. Remember, that account is contradicted by multiple official investigations. But even if it’s accurate, the reasons the authors provided for the “stand down” order are consistent with what the AP reported last December: the station chief wanted to enlist Libyan militias to conduct a rescue operation. As ThinkProgress noted, the book indicates that the station chief was acting “on his own authority and was not operating under orders from anyone in Washington D.C.”

Conservatives are, of course, still trying to work the “unanswered questions” angle. Stephen F. Hayes writes that the “House Select Committee on Benghazi begins its hearings next week. Addressing the discrepancies raised by [the new Benghazi book] should be among its first orders of business.” Those “discrepancies” are either already explained or of little importance.

But this is what remains of the grandiose Benghazi "stand down" conspiracy. What was once outright proof of the administration’s coldblooded efforts to allow U.S. diplomatic personnel to die has become a small-bore discussion of why security officers were briefly delayed in responding to the attacks.