How "Saturday Night Live" got soft 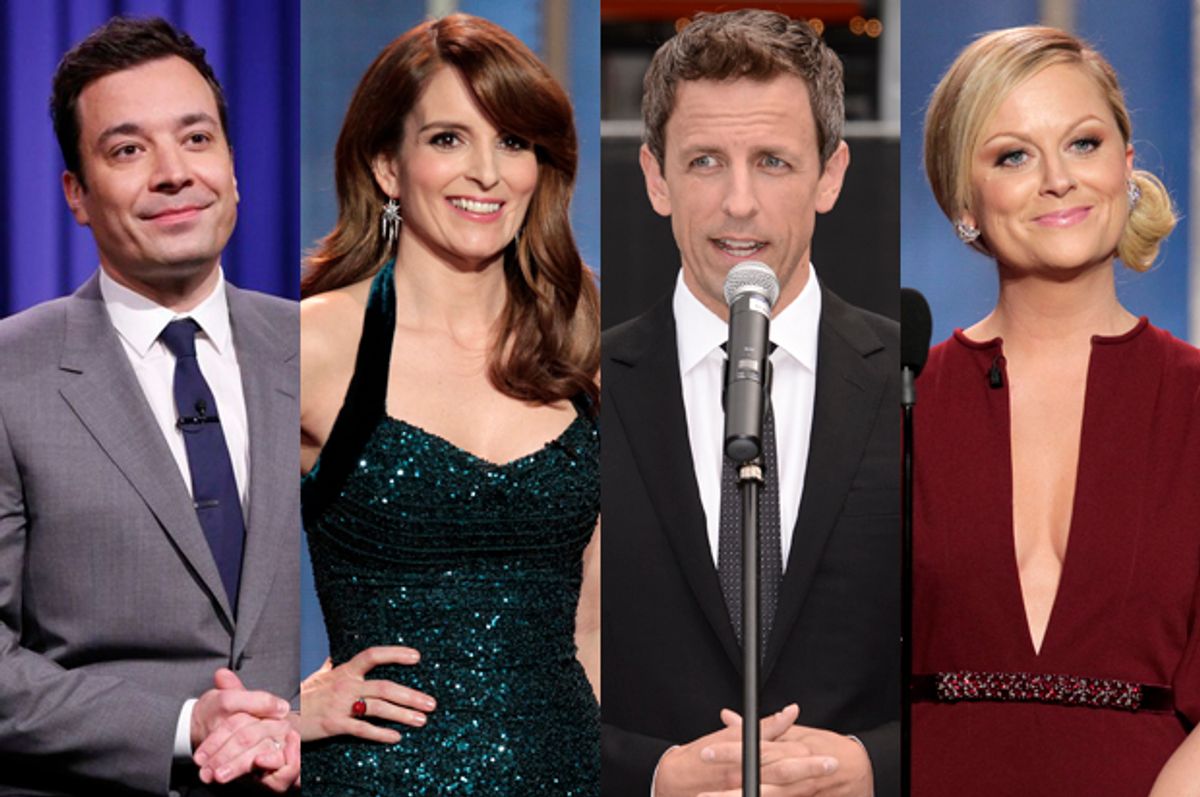 At the start of its 40th season, in some ways "Saturday Night Live" is at a low ebb. The previous season saw a slew of new cast members fail, by and large, to capture the imaginations of viewers as had departed stars including Fred Armisen, Jason Sudeikis, and Andy Samberg; the rejiggered "Weekend Update" with Cecily Strong and Colin Jost was a nonstarter despite Strong's best efforts; political satire on the show had gone from toothless but okay to truly dire; the show had come to rely on nostalgia-bait, with the season premiere hosted by Tina Fey and the finale hosted by Samberg, rather than anything new.

But you can still say this about today's "SNL": it (that is, specifically Lorne Michaels) is a more effective generator of ready-made comedy stars than any other institution on TV. Both of NBC's late night franchises now belong to former "SNL" cast members, Jimmy Fallon and Seth Meyers. Tina Fey and Amy Poehler are clearly huge stars in their own right as well as in tandem, entering their third consecutive year hosting the Golden Globes; Poehler is set to release her first book, "Yes Please," in the run-up to the final season of her "Parks and Recreation," while Fey divides her time between starring in movies and working on a forthcoming NBC series. Even "SNL" writers are getting in on the game, as John Mulaney, who never appeared in sketches, is now headlining a (frankly not that great) Fox sitcom, airing on the same night as Samberg's "Brooklyn Nine-Nine." Bill Hader and Kristen Wiig are headlining the fall season's first semi-important movie, the siblings-contemplating-suicide drama "The Skeleton Twins." Enough, for now, though we've yet to deal with Armisen's "Portlandia" and Maya Rudolph's "Maya Rudolph Show."

The "SNL" house voice is by and large toothless, more interested in remarking upon events than, Stewart- or Colbertishly, eviscerating them. This shows through in Fallon's cutesy non-interviews with celebrities, which quickly give way to games; in Meyers's refusal to go after just about anyone in his capacity as an Emmys host; in the cloying "Parks and Recreation" conviction that all civic problems in America can be solved by good people putting their heads together, and in Fey's stuffing "30 Rock" with celebrity guest stars past the point of reason. None are in any way experimental; they're occasionally absurdist, but never sharp-edged. Even Samberg, whose digital shorts were some of the weirdest bits to hit "SNL" in recent memory, has been fun and sunny in his post-"SNL" career. All feel like people earnestly happy to be doing what they're doing and earnestly hopeful that their happiness will carry over to the audience.

Often, it does. At other times -- more often than not -- it feels a bit like a club that the audience can't quite gain entry to. Seth Meyers, over several nights of his talk show, told a long story of his accidentally trading credit cards with Amy Poehler. Then there was Samberg's appearing in costume at the Emmys to bellow at Lena Headey. This, a literal restaging of something that had happened on another show where the joke was mainly "this is quirky," was one of the show's big centerpieces.

And the atmosphere surrounding Studio 8-H is getting a little toxic. New "Weekend Update" anchor Colin Jost introducing himself to America with a deadly-earnest statement that he was fulfilling a dream was the first sign. "SNL" stars tend to think that the world is wildly interested in how their show comes together -- resulting in a number of frankly ungracious interviews about past hosts as well as in "Mulaney," a sitcom that's so far about the neuroses of a writer working for a sphinxlike, older, apparently Canadian celebrity. Maybe it's time to put a hold on new "SNL" talents -- no matter how talented -- getting their own TV shows by virtue of their "SNL" cred.

Anyone who's actually watched "SNL" in the past few years knows that even before last season, the show leaned too heavily on fake game shows and fake talk shows hosted by celebrities. Those formats are fairly easy to execute under challenging circumstances, and also allow the cast to get away without offending anyone too badly.

No one's advocating for "Saturday Night Live" to become insult comedy overnight. But the world probably has enough TV shows about people in mildly absurd circumstances learning by episode's end that things weren't as bad as they seemed, with help from a very special guest. And the development of a sharper-edged alternative to Fallon in the form of Stephen Colbert's forthcoming CBS "Late Show" will be welcome. Though Colbert's been around for longer, it's Fallon, and what he represents, that feels like the tired institution.