Rubio's absurd foreign policy: Flip-flopping on ISIS, Syria and everything else 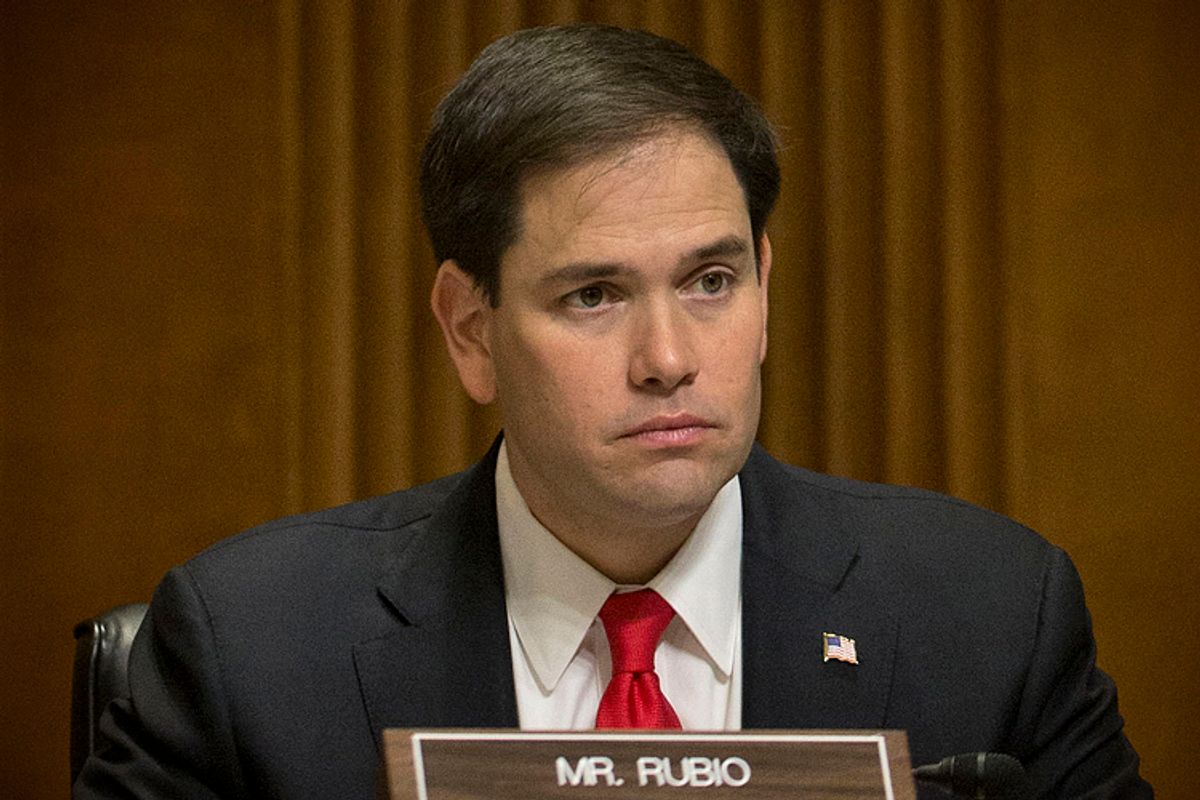 It seems that Marco Rubio has had a change of heart on President Obama’s new plan to blow things up in the Middle East. Yesterday morning, the Florida Republican appeared on NPR’s “Morning Edition” and offered measured praise for Obama’s Wednesday night speech laying out his strategy for taking on the terrorist group ISIS. “I think we’re in a much better place from where he was previously,” Rubio said. “By and large, I think the speech last night was effective in that regard.”

But that was yesterday. Today is a whole new day with a whole new slate of Marco Rubio foreign policy opinions. In an Op-Ed for the Washington Post, Rubio writes that Obama’s speech offered the “potential to begin a departure from the isolationism that he and former secretary of state Hillary Rodham Clinton have advocated during their years in office,” but there is a “risk” that Obama’s “focus on a counterterrorism campaign akin to those waged in Yemen and Somalia, and his reliance on regional partners to deal with the challenge posed by the Islamic State, could lead to the continuation of what has been the most disengaged presidential foreign policy in modern American history.”

I’ll get to the “isolationism” bit in a moment, since that’s hilarious (coming from Rubio, in particular), but for right now let’s focus on the strategic criticism. If Obama’s plan is so fraught with risk, then what is the proper way to deal with ISIS? Well, Rubio has an answer for that:

To confront the Islamic State terrorists, we need a sustained air campaign targeting their leadership, sources of income and supply routes, wherever they exist. We must increase our efforts to equip and capacitate non-jihadists in Syria to fight the terrorist group. And we must arm and support forces in Iraq confronting it, including responsible Iraqi partners and the Kurds. In addition, we must persuade nations in the region threatened by the Islamic State to participate in real efforts to defeat it.

This strategy Rubio wants to see adopted is essentially a word-for-word recitation of the strategy Obama laid out in his speech. Compare what Rubio wrote to these selected quotes from Obama’s remarks:

We will conduct a systematic campaign of airstrikes against these terrorists … I have made it clear that we will hunt down terrorists who threaten our country, wherever they are … we will increase our support to forces fighting these terrorists on the ground … they are needed to support Iraqi and Kurdish forces with training, intelligence and equipment … we have ramped up our military assistance to the Syrian opposition … we cannot do for Iraqis what they must do for themselves, nor can we take the place of Arab partners in securing their region.

So, according to Senate Foreign Relations Committee member Marco Rubio, the risky Obama strategy for dealing with ISIS should be replaced by the far more sensible Obama strategy.

Now let’s talk about the so-called Obama-Clinton “isolationism” that Rubio thinks we’ve been suffering under for the past half-decade. His case rests on Obama’s “focus on prematurely ending wars in the interest of ‘nation-building here at home’ to his abandonment of America’s traditional allies in an effort to placate America’s enemies.” Even if you were to accept that assessment as accurate, it leaves off some pretty important stuff – most notably, the “isolationist” president’s 2011 action to assist in the toppling of Gadhafi’s regime in Libya.

You know who was a big fan of “isolationist” Obama’s action in Libya? A certain Republican senator from Florida. “I am writing to seek your support for bringing a bi-partisan resolution to the Senate floor authorizing the President's decision to participate in allied military action in Libya,” Rubio wrote in a March 2011 letter to Harry Reid and Mitch McConnell. “This resolution should also state that removing Muammar Qaddafi from power is in our national interest and therefore should authorize the President to accomplish this goal.”

Syria also factors into Rubio’s harangue against Obama’s “isolationism.” This is a touchy subject for Rubio, given that he’s been all over the map when it comes to Obama and Syria. Back in April of last year, after Syrian President Bashar al-Assad used chemical weapons against his own people, Rubio issued a hawkish statement calling for direct U.S. engagement in the Syrian civil war. “The time for passive engagement in this conflict must come to an end. It is in the vital national security interest of our nation to see Assad’s removal.”

After fumbling with the politics and painting himself into a corner, Obama opted to conduct missile strikes on the Assad regime, but only with approval from Congress. And given the opportunity to vote to take military action against Assad, Rubio changed his mind and voted “no,” arguing that the administration arrived too late at the correct position. “While I have long argued forcefully for engagement in empowering the Syrian people, I have never supported the use of US military force in the conflict. And I still don’t,” Rubio said following the vote.

All this to say that Rubio’s foreign policy positions are generally incoherent and presume that words don’t actually mean anything. They should serve him well heading into 2016.