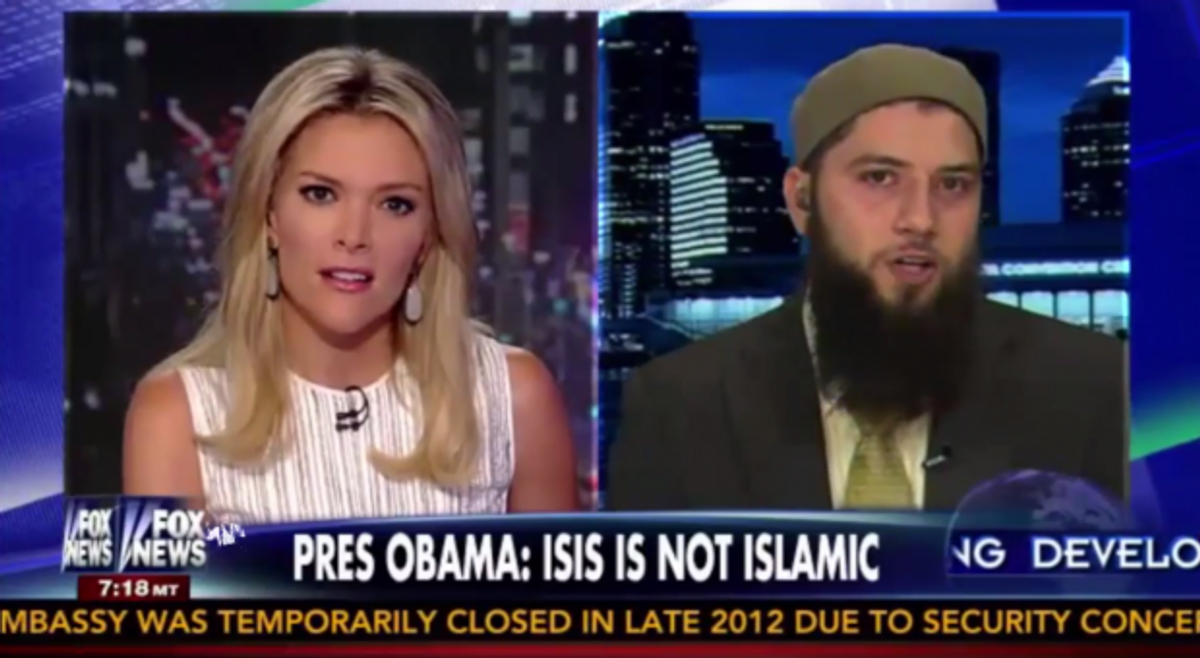 During the Thursday edition of her show "The Kelly File," Fox News star host Megyn Kelly was joined by guest Hassan Shibly, the chief executive director of the Florida branch of the Council on American-Islamic Relations (CAIR) to have the kind of debate you only see on Fox News — a debate over whether the extremist group ISIS, with its tens of thousands of members, was a fair representative of the entirety of Islam, with its 1.6 billion adherents.

After thanking him for appearing on the show, Kelly got right into it. "It is true that Islam is not ISIS," she began, "but it is also true that ISIS is Islamic, is it not?" (Kelly's question was inspired by President Obama's recent declaration that "ISIL is not Islamic," which infuriated the right.)

"Well, ISIS is no more Islamic than the Westboro Baptist Church is, or the Crusaders are, or Anders Breivik is [Christian]," Shibly replied. "Or anybody who commits violence in the name of faith. Unfortunately, every single faith has had crazy extremists distort and twist that faith to justify their crazy political ends."

"The reality is," Shibly continued, "that moderate Christians, Muslims and Jews have a lot more in common with each other than they do with extremists from within their own faith. And, actually, extremist Muslims and extremist anti-Muslims have a lot in common, and that is that they both distort the Islamic faith to promote their twisted agenda, which is rejected by the 1.7 billion Muslims of the world."

Kelly responded that while ISIS "may be rejecting moderate Islam" they were still "preaching a form of Islam that is very popular in some corners of the world; and by those countries that follow strict Shariah law, they're not that far away from ISIS in some of their beliefs, in particular about women, are they?"

Shibly responded by noting the many scholars of Islamic law and other authorities within the Islamic community who have denounced ISIS and criticized it harshly for its violent interpretation of Islam, but Kelly retorted that "not everybody" within the Islamic world had denounced ISIS. "No one's trying to condemn all Muslims," Kelly assured Shibly, "but to aruge that the Islamic State [ISIS] is not Islamic, and that there isn't this radical faction — which is significant within Islam — is to deny reality."

The two went at it for a bit longer, with Kelly implying the gap between ISIS and the rest of the Muslim world was smaller than the president thinks, and with Shibly responding that extremism can be found in any religious community. But near the end of the segment, Kelly switched gears, did her best Joe McCarthy impression, and began questioning Shibly for 9/11 truther links posted on his Facebook wall and controversial Muslim clerics listed among his Facebook interests. Shibly seemed surprised to be suddenly asked to defend his social media habits and got a little rattled, which strikes us as odd because, c'mon, it's Megyn Kelly.

You can watch Megyn Kelly get to the bottom of this whole Islam thing below, via Media Matters: