This is bigger than the NFL: 5 things you can do about domestic violence 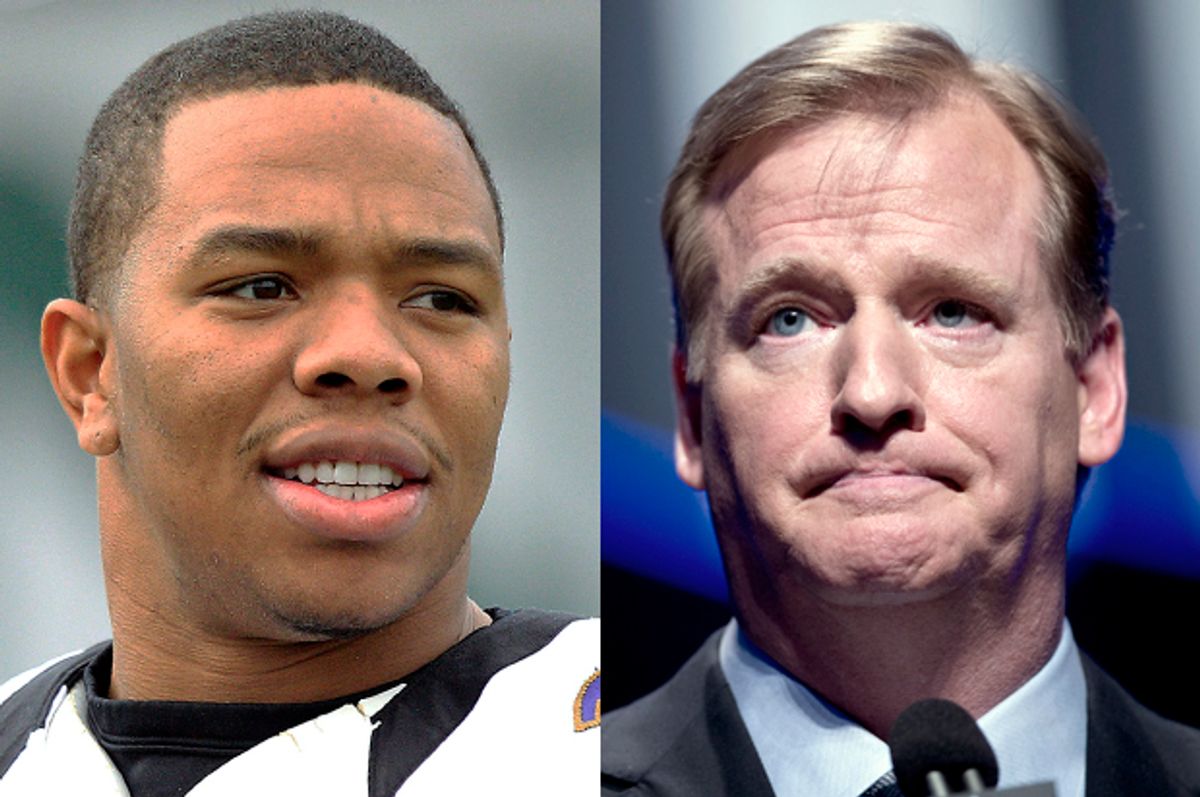 This week, I wrote a lot about Ray Rice, the NFL's domestic violence problem, the policies we have in place that make it incredibly difficult for women to leave abusive relationships and crisis levels of intimate partner violence in the United States. In fact, I spend a lot of my time in general writing about violence against women. And confronting the same brutality over and over again can feel, well, really terrible. It can feel like nothing will ever change because we are just stuck someplace very, very bad.

When this happens, I try to remind myself that things can change -- and are changing, albeit way too slowly. I also remind myself that there's more I can do to support survivors and make the change happen. Assuming that maybe some of you have been feeling equally outraged and saddened this week, I wanted to share a list of things to do -- today, right now, tomorrow, over and over again -- to help people who are currently in dangerous situations and to help put a stop to domestic violence.

Calls to the National Domestic Violence Hotline surged this week after video was released showing former Baltimore Ravens running back Ray Rice knocking out his partner, Janay Rice. "We had an outpouring of women saying, 'Oh my god, I didn't realize this happened to other people.' They thought they were living a life that was very unique to them," hotline CEO Katie Ray-Jones told Laura Bassett at the Huffington Post. "One woman called in who is married to a [mixed martial arts] fighter. She said, 'I just saw that video, and I know my husband could do worse, and I need help."

The National Domestic Violence Hotline and others provide an invaluable national resource to victims of intimate partner violence, providing immediate support and referral services that save lives. For women in abusive situations, a phone call or resources provided online can be lifesaving. But because these hotlines, like so many other service providers, are understaffed and underfunded, meeting the needs of every caller remains a challenge.

"Last year, we didn't answer over 77,000 calls due to lack of resources," Ray-Jones explained. "This is a situation where women are holding longer on the lines and waiting for an advocate to be free. But we don't have the financial resources to bring in more staff, so we're at a place where we're just encouraging advocates to do the best they can."

The sequestration budget has left so many other providers operating on a shoestring. An increase in funding is set to go into effect in October, but resources remain scarce, and the need remains great.

You can donate to the the National Domestic Violence Hotline here. New York has a vital hotline operated by Safe Horizon, which you can donate to here. Or you can contact your state's anti-violence coalition for more information (including volunteer opportunities) about local hotlines here.

Donate to service providers in your community.

During the government shutdown last year, I interviewed a number of local service providers who were struggling with tiny budgets to keep services running without disruption. Some of these women were working without pay because they knew that they were, in many cases, all that stood between an escape from violence or a another day of abuse for victims in their communities.

The Denver Domestic Violence Coordinating Council, which provides crisis intervention and safety planning to victims of intimate partner violence, was one of the VAWA grantees bracing itself during the shutdown. Executive director Dora-Lee Larson told me that she would keep working, even if the grants stopped.

“I am not going to walk away from this job,” she said.

Around the same time, the director of a Florida shelter expressed concern that loss of funding would mean 14 families and more than 30 children who are currently being housed by her program would be put out on the street. In California, one shelter adopted a “scattered furlough” approach -- asking staff to choose one day a week as a furlough day so that the shelter never has to close for a full day.

Odds are better than good that the people working in your community -- providing shelter, legal services, job assistance and other support -- are making the same kinds of sacrifices to keep their doors open.

This week, the Indianapolis Colts pledged $100,000 to a local domestic violence resource center in their state. Our pockets may not be as steep, but every donation helps. In New York, local organizations serve communities throughout the state. You can contact your state's anti-violence coalition for more information about who in your community is doing that work here, or reach out to national organizations like the National Network to End Domestic Violence and INCITE! Women of Color Against Violence to learn more about the issue and get connected to local efforts.

Intimate partner violence is not a "private matter," and creating support systems for victims isn't just about providers and community resources. State and national policies, and the priorities of state and national politicians, determine a lot in terms of what options are available to people seeking to leave abusive relationships.

As I pointed out earlier this week (so forgive me for quoting myself here), the policies that directly impact women’s livelihoods can also be a matter of life and death when it comes to abusive relationships. One in three women are living in or on the verge of poverty, which amounts to 42 million women nationwide and the 28 million children who depend on them. Two out of every three minimum wage workers is a woman, and many are also the primary caregivers in their households. So increasing the minimum wage and implementing other policies that ensure women's economic survival also help victims of abuse.

Women leaving abusive relationships are often women transitioning to single-earner households. At the current minimum wage, a woman who works full-time averages around $14,500 each year. That’s $4,000 less than the poverty level for a mother of two children. Without basic financial security, women are often forced to remain in relationships that threaten their lives.

So find out where your local, state and national representatives stand on these issues, then let them know how you feel -- by getting in touch and using your vote.

Even though it was prompted by bad press and is self-policed in a way that gives me zero faith that the program will be meaningfully enforced, the NFL has introduced a new domestic violence policy that includes quite a few prevention measures, including community interventions and education.

Such measures, when not being overseen by a soulless organization that has made it clear that such reforms are about PR and not women's safety, are actually really important. Because violence is cyclical, and a learned behavior. And identifying violence -- helping men and women understand that it's unacceptable -- requires a lot of education and discussion.

Programs like Mentors in Violence Prevention and Coaching Boys into Men provide education and community training programs to help stop violence before it starts. There are other programs out there -- try to bring them into your schools, your churches and your communities.

I could go on about why this matters so much, but CBS sportscaster James Brown said it beautifully this week, so I'll just quote him (emphasis mine):

Now let’s be clear, this problem is bigger than football. There has been, appropriately so, intense and widespread outrage following the release of the video showing what happened inside the elevator at the casino. But wouldn’t it be productive if this collective outrage, as my colleagues have said, could be channeled to truly hear and address the long-suffering cries for help by so many women? And as they said, do something about it? Like an on-going education of men about what healthy, respectful manhood is all about.

And it starts with how we view women. Our language is important. For instance, when a guy says, ‘you throw the ball like a girl’ or ‘you’re a little sissy,’ it reflects an attitude that devalues women and attitudes will eventually manifest in some fashion. Women have been at the forefront in the domestic violence awareness and prevention arena. And whether Janay Rice considers herself a victim or not, millions of women in this country are.

Consider this: According to domestic violence experts, more than three women per day lose their lives at the hands of their partners. That means that since the night February 15th in Atlantic City [when the elevator incident occurred] more than 600 women have died.

So this is yet another call to men to stand up and take responsibility for their thoughts, their words, their deeds and as Deion [Sanders] says to give help or to get help, because our silence is deafening and deadly.

Part of the reason our responses to violence tend to be so punitive and wrongheaded is because we're not listening to victims -- the women and men who should be guiding our responses.

So when people who have experienced intimate partner violence talk, get quiet and start listening. You'll learn a lot.