Why do we love prison movies?

"Shawshank Redemption." "Chopper." "Starred Up." Something about films set in jails keeps reeling us in 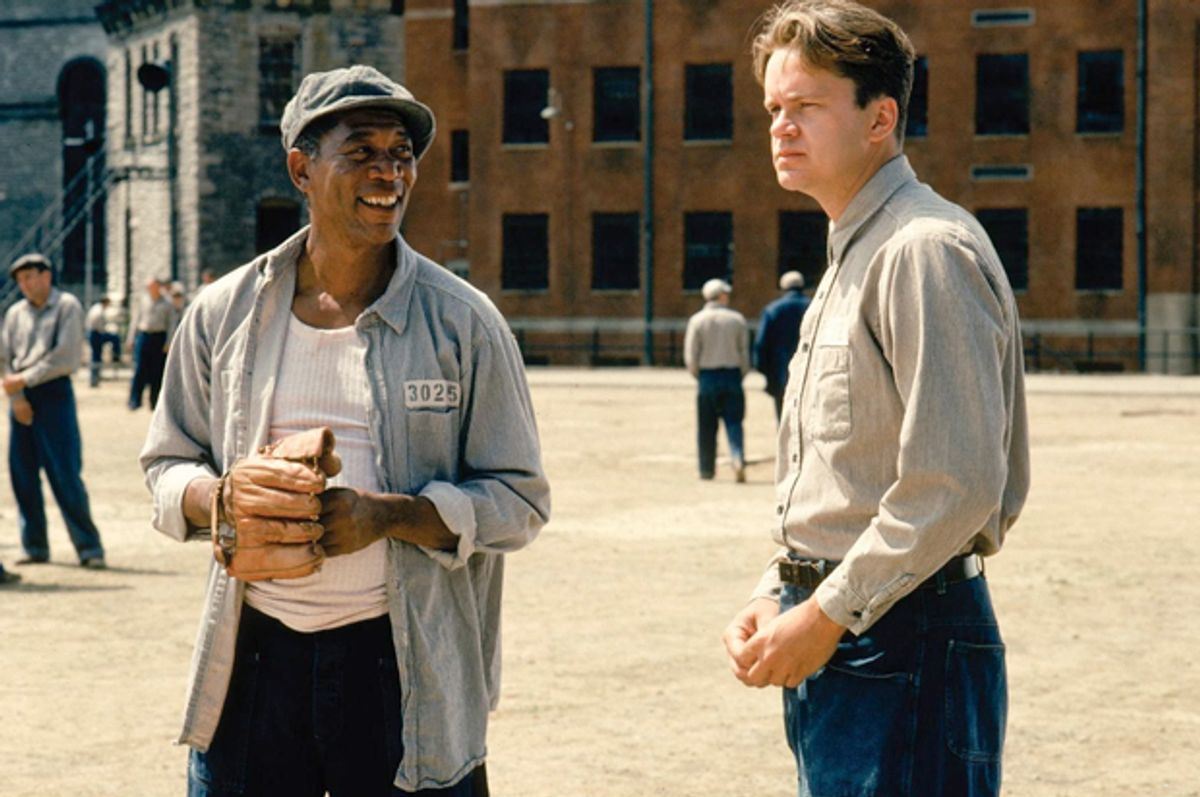 You can say this for prison: It seems to give actors roles they can really sink their teeth into. For many actors, a prison film can be an opportunity for (pardon the pun) a real breakout performance. So why do we love movies about jail so much? In part it's the claustrophobic, walled-in plot--the necessarily high stakes of a drama from which no one involved can escape. And then there are the terrifying, memorable performances prison films have produced.

Jack O’Connell is going to be a household name soon—he is already getting attention for "Unbroken," out this Christmas—but check out his ferocious performance in "Starred Up" first. He plays Eric, a 19-year-old prisoner sent to an adult facility (“starred up”). Watching O’Connell enter the facility is fascinating. He checks everything out as he is escorted to his cell, and then experiences a crushing moment acknowledging his new life. But the secret to O’Connell’s performance, and why it is so great, is that he plays Eric as untouchable. A few scenes later, Eric beats a fellow prisoner unconscious. He bites a guard’s penis in one intense scene, and he cheekily explains that if the facility’s rehabilitation efforts are successful, they will soon be out of jobs. In fact, Eric agrees to attend counseling sessions with Oliver (Rupert Friend) only after the latter admits, “I want to fucking hurt you.” "Starred Up" eventually turns into a father/son story, with Eric reuniting with his absent dad, Neville (Ben Mendelsohn), in the prison. Their relationship is mercurial too, with Eric none too pleased his dad is having relations with his cellmate—“It’s prison,” Neville defends—and being “embarrassed” by his dad to the point where the men act out violently, bringing "Starred Up" to its dramatic climax.

In "Bronson," prison is theatre, and Tom Hardy dominates this film that vividly shows how vicious the notorious criminal Charles Bronson is. Narrating his story in a theater—occasionally in white Kabuki makeup, while dressed in a suit—Bronson talks in the pre-title sequence about how he found his calling in crime. The bullet-headed Bronson is soon seen completely naked, fighting off a handful of guards in a cage. Unlike most people, for whom jail is a nightmare, Bronson loves prison. “It’s brilliant!” he effuses, and “a blast!” Hardy rises to the challenge of making Britain’s most violent prisoner ingratiating as he goes from tears to laughter in one scene, or when he bleeds and makes other bleed. A sequence in which Hardy plays both parts—hardened criminal and female nurse—in a conversation about Bronson wanting to return to his “hotel room” (as he calls his cell) is particularly terrific.

Has Eric Bana ever matched the level of his electrifying performance in "Chopper"? Covered in tattoos and sporting metal teeth, Bana was a TV sketch comedian in his native Australia at the time he made this film, and unknown to American audiences. His performance here, as Mark “Chopper” Read, Australia’s most notorious prisoner, is full of bravado. Watch him react after his treacherous friend and fellow prisoner Jimmy (Simon Lyndon) stabs him multiple times with a shiv. Chopper hugs Jimmy and with little force, coerces him to drop the knife. After a trial, Chopper pleads to be transferred, and when his request is denied, Chopper has his ears sliced off so he can get his way and move to another jail. Bloody and unsettling, but Bana’s performance is so impressive that you can’t look away.

As Bobby Sands, Michael Fassbender gives a truly phenomenal performance in Steve McQueen’s transcendent film. Yes, the then-largely-unknown actor lost weight to portray Sands’ hunger strike, but his physical transformation is only a part of his star-making turn. Fassbender is mesmerizing to watch as Bobby enacts a “no wash protest,” kicking and fighting as guards cut his hair and scrub his body. But the film’s most remarkable scene is all dialogue: a 20-plus-minute conversation between Sands and a priest (Liam Cunningham). Shot with the two men sitting at a table smoking, they converse in silhouette. McQueen films it in an unblinking, unbroken take; their initially banal pleasantries turn into a gripping conversation in which Sands announces his hunger strike. The scene is the film’s moral centerpiece. It addresses having the courage of one’s convictions. Is Bobby, who feels he is making the right decision with his protest, looking to become a martyr? The answer comes in a riveting monologue that Fassbender delivers in close-up.

Javier Bardem is Reinaldo Arenas, in his Oscar-nominated performance as the gay Cuban writer. The role put the superb Spanish actor on the cultural radar, and he quickly became a household name. Bardem is astonishing. Arenas was sent to prison for “ideological deviation.” While he escapes from one jail, he ends up in another. The experience, he claims in the film, allowed him to write his novel “in the middle of [other prisoners’] screaming and crying.” That it was smuggled out in the ass of fellow prisoner, Bon Bon (a fetching Johnny Depp in drag), is amazing in itself. "Before Night Falls," however, also contains a claustrophobic scene of Arenas in solitary confinement—the cell is so small, Arenas cannot stand upright—that may cause viewers panic attacks. Bardem’s performance is sexy, nervy and downright magnificent; he captures the desperation Arenas feels achingly well.

If Brad Davis never quite had the chance for stardom—his only other real leading role of note was in Fassbinder’s last film, "Querelle"—at least "Midnight Express" gave him a showcase for his talents. Alan Parker’s film certainly emphasizes Davis’ good looks as Billy Hayes in this Hollywood-ized story of his years in a Turkish prison. After being caught trying to smuggle drugs, Billy is brutalized in the foreign jail—beaten, tortured, strung up and ensnared by the draconian legal system. His impassioned plea in a courtroom, where he rallies for mercy and rails against his treatment and legal battles, may seem like an excuse for actorly showboating, but "Midnight Express" is all about extremes. From the physical abuse to Billy rejecting the sexual overtures of a fellow prisoner (which Oscar-winning screenwriter Oliver Stone downplayed) to a violent, bloody attack that leads to him being sent to a prison for the criminally insane, Davis palpably conveys Billy’s fear and frustration. It’s a helluva performance by an actor who never quite saw the spotlight again.

Frank Darabont’s highly satisfying adaptation of Stephen King’s short story is arguably everyone’s favorite prison film. Andy Dufresne (Tim Robbins) is imprisoned for two murders he insists he didn’t commit. Inside, he meets Red (Morgan Freeman), a convict who can get him anything he wants. Red’s observant voice-over talks about how Andy (and others) adapt to life in the joint. Freeman is incredibly moving as the omniscient narrator, but his marvelous facial expressions speak volumes, too—just watch him slyly smile when Andy asks him why he’s called Red. As “the only guilty man in jail,” Red talks about hope and fear, routine and more routine, as well as being “institutionalized” (meaning being behind bars for so long, that it becomes the only life a man knows). Freeman’s poignant performance was nominated for an Oscar, and a scene in which he describes the feeling of freedom after Andy pulls a stunt and blasts an opera on the loudspeakers is one of this classic film’s highlights. Director Darabont went back to jail and to Stephen King source material for "The Green Mile" five years later, but that film failed to capture quite the same magic as "Shawshank."

William Hurt won an Oscar for his portrayal of Molina, a gay man who shares his cell with Valentin (Raul Julia), a political revolutionary in Héctor Babenco’s terrific adaptation of Manuel Puig’s novel. The two men are opposites: the tough Valentin is all about the struggle, while the sensitive Molina is all about pleasure. As Molina passes the time by telling stories from Hollywood films, he hopes to bond with his cellmate—whom the warden has asked him to betray. Hurt’s performance is particularly strong in his body language, but also his voice-overs as he recounts Nazi propaganda films featuring the Spider Woman (Sonia Braga) of the title. Babenco shrewdly features prison bars in almost every shot to emphasize the confined space and the separate freedoms (physical and emotional) both men seek. Babenco returned to jail in 2003 to make the outstanding "Carandiru," about an infamous Brazilian prison riot.

Daniel Day-Lewis was already a star when he played Gerry Conlon in Jim Sheridan’s "In the Name of the Father," but he gives another exceptional performance here. As an innocent man who is coerced along with four others into pleading guilty to an IRA bombing, Conlon spends 15 years behind bars, battling an unjust legal system with the help of his lawyer, Gareth Peirce (Emma Thompson). But he also has unresolved feelings of anger toward his father, Giuseppe (Pete Postlethwaite). A scene where Gerry becomes enraged at his dad, who has just been imprisoned with him, shows the strength of Day-Lewis’s edgy, strung-out performance. Here is a man already feeling unfairly treated, lashing out at his father, whom he felt never properly loved or supported him.

As Derek Vinyard, a skinhead in "American History X," Edward Norton is pretty fierce. Sent to jail, where he must follow the rules, he befriends several white supremacists, but they soon turn on him. He eventually connects with an African-American inmate, Lamont (Guy Torry) in the prison laundry. "American History " is a heavy-handed morality play; the black-and-white lensing isn’t arty, it only overemphasizes the themes of racism. However, while the film is never subtle, Norton’s intense, expressive, Oscar-nominated performance is—just watch his eyes when Derek is raped in the shower: they speak volumes.

Sean Penn has been behind bars before (see "Bad Boys" in 1983), but he made an indelible impression as Matthew Poncelet, a convicted murderer and rapist on death row in "Dead Man Walking." Matthew receives comfort from Sister Helen Prejean (Susan Sarandon, who won an Oscar for her role), and their interactions form the emotional core of the film. When they talk through glass, director Tim Robbins effectively films Matthew and Helen’s reflections as if it were a split screen, so viewers can see both characters’ reactions as she counsels him that the truth shall set him free. Their bond is magnified in their conversation during the last hour of Matthew’s life, when he confesses to his crimes and she comforts him. "Dead Man Walking" is a powerful story about the morality of capital punishment, and the message is driven home by the strength of Penn and Sarandon’s performances.

Anthony Hopkins’ breathtaking (and Oscar-winning) turn as Hannibal “The Cannibal” Lecter is easily one of the greatest prison performances ever committed to screen. It re-energized the actor’s career; he soon headlined prestigious films like "The Remains of the Day" and "Nixon." In "Silence of the Lambs," Lecter’s menace is felt throughout, even though Hopkins has only a handful of scenes (and less than 25 minutes of screen time in the two-hour film). Director Jonathan Demme artfully shoots the maximum-security prisoner in shadow, in close-up and from above to emphasize his dangerous nature. Lecter may be incarcerated, but he finds ways of escaping: both mentally—through his riveting exchanges with FBI agent Clarice Starling (Jodie Foster), where he draws out his words and taunts her—and physically, as when he takes a bite out of a guard. But the best moment between Lecter and Clarice is not when he clues her in to the nature of the killer she seeks, but a brief unexpected moment, when he chillingly strokes her finger.