My amazing arranged marriage: I resisted at first

I resisted at first, confused about love, and whether I should find it myself. I see it differently 19 years later 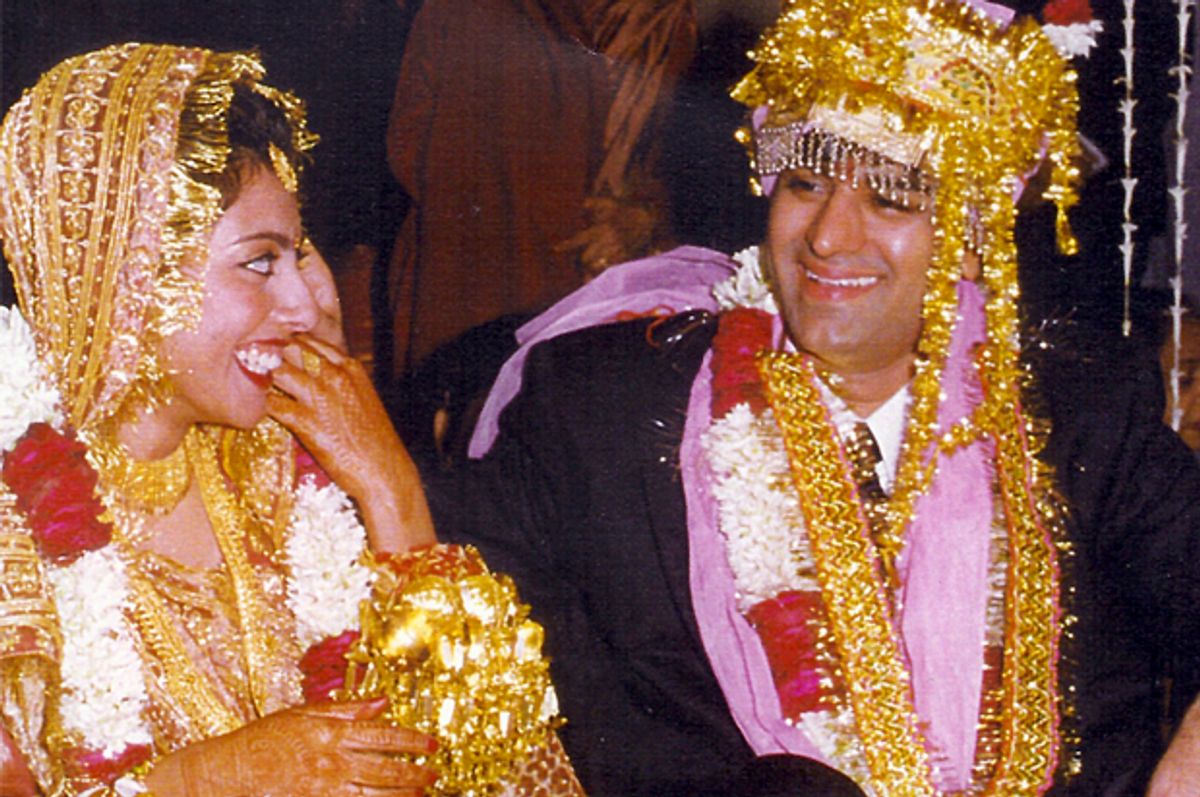 A photo of the author's wedding
--

My father’s phone call at work that morning changed everything. “Don’t go out with your friends tonight. We’ve made dinner plans for you.” I knew what that meant. And there was no getting out of it.

An arranged marriage is not the diktat it once was. It has evolved over the years into a meeting of mutual consent between both parties, and my Indian parents, products of an arranged marriage, had set up a meeting for me. Problem was, I wasn’t consenting.

At the time, I was living the high life. I loved my job with a vacation tour operator in Dubai, and I had it good living with my folks. At 24, I had no responsibilities, no rent to pay, no dinner to cook and no laundry to do.

My father told me to be home and dressed by seven. No excuses. He rarely stood his ground with me, but was firm in his expectations this time. I was stuck. I spent the rest of the day hovering between dread and resentment.

It wasn’t like I was against getting married and settling down. Far from it. What I didn’t appreciate was being steered toward marriage just because I would soon be considered past marriageable age. Whether arranged by them or accomplished on my own, my parents did not buy into my notion that I should marry only when I was good and ready. They worried it was taking too long. My ambivalence about my future was giving them sleepless nights.

I understood the pressures my parents were under. I was their oldest child and their only daughter. They had educated and raised me to be independent and self-sufficient. Now all that remained was their last major responsibility: to see me married.

Yet, I resisted. I did not a need a man or a marriage. It made no sense to me to make such a drastic change in my life just because I reached an age arbitrarily consigned by our society and culture after which I would be deemed “too old.”

Aware of their motivations, I could not bring myself to put my foot down and absolutely forbid them to search for a suitable life partner for me. I love them, and would consider that disrespectful. However, I did intend to make their search as difficult as possible. On the surface, I was compliant. I heard them out when a possible match came up. I looked at photos and pored over résumés when they asked. But I sabotaged their efforts, rejecting candidates without compunction, finding every flimsy excuse I could.

That evening, I was outmaneuvered. This time they simply invited the young man to dinner. Apparently he had been in my parents’ sights for a while, ever since they met him on a recent trip to India. He lived in New York, but was visiting his father after heart bypass surgery. Now, he was in Dubai to meet me.

When my parents began the search for a suitable match they asked me for a few guidelines. I hoped my list would make it hard, if not impossible, to find someone who would meet all my criteria. He should have a post-graduate degree, I said. And, because they were looking for a Punjabi Indian boy in any part of the world, he had to live in a place where there would be no waiting period to fulfill any immigration requirements (I had heard the horror stories of newlyweds having to wait up to seven years until their paperwork was approved). Most importantly -- and I was firm on this -- they could not list my name on any matrimonial pages in Indian newspapers. I knew that it would drastically reduce the pool of suitors.

The bell rang. I checked myself in the mirror. Old jeans, T-shirt, no makeup. The perfect outfit to demonstrate my antipathy. One glance and my mother pursed her lips. It was a silent, cold walk to the living room.

“This is Rajiv,” my father said. Firm grip, warm smile, sharp features. He was tall, but not crazily so. He was already sharing a beer with my dad. And what do you know? He was wearing jeans too. The prospects for the evening began to look up. Perhaps it would not be as torturous as I had thought. Besides, my mother was smiling again.

Rajiv was laid back, looking comfortable. He shared his impressions of his first visit to Dubai. What they were exactly, I don’t recall, but I do remember that we all laughed. The liveliness and storytelling lasted through dinner. Then it came time for Rajiv and I to spend some time together before I drove him back to his hotel.

I geared up for the awkwardness that would surely come once we were alone. Wrong again. “Guess it’s time for 20 questions,” he joked. What was he doing charming me by asking about my job, my friends, my interests, what I did for fun? Telling me funny stories about his life in New York? I had always maintained that I would prefer any other country to the U.S. It was too far from everyone I knew, too familiar and alien all at once. But after a couple of cups of coffee it did not seem so inconceivable. This was going seriously sideways. I was actually enjoying myself.

My mother worried that she had brought me up too leniently. She had encouraged me to study abroad, travel and live a life different from hers. She hoped it wouldn’t backfire now. She was asking me to consider the conventional institution of marriage topped off with the traditional customs of the arranged marriage.

But what about love? My friends asked. Shouldn’t you marry for love? It was a legitimate question. If I went along with my parents’ choice, would I regret not having done it my way?

It was my turn to brood late into the night over the choice before me. Love seemed the aftermath of an accidental collision -- of meeting the right person at the right time -- and what if that never happened for me? It hadn’t so far mainly because I had not been able to trust my judgment in choosing someone for myself. Lately too I felt like I was outgrowing the whole rigmarole of meeting, dating, wondering and agonizing over whether “this was it.” Why fight the opportunity my parents were offering me? I could come to regret that.

But my fears and doubts about Rajiv swung from the ridiculous to the mundane. I had only seen the sociable, pleasant side of him. What if he was an ax murderer? A possessive jerk? What if he did not give me room to breathe? Expected me to be just a housewife? What if he was disorganized? Or too particular? How would I have to adjust my personality to fit someone else’s?

My parents pointed out that they had met all the criteria on the list. He was a chemical engineer and an MBA. He had a good job and all the right paperwork. They had met him through my father’s uncle, a close family member who had nothing but nice things to say about Rajiv and his family.

Everything they said was making sense. Adulthood involved hard changes. It was life. There were no guarantees of success or failure. All they could do was give me the best chance within their power with which to take on the future. The rest was up to me.

In the end, I decided to put my faith in the two people who knew me best and had only my interests at heart.

Rajiv called me after he heard I had given my assent. He wanted to reassure me, to check with me that I had not been unnecessarily influenced. I found it amusing, as I was the family member considered most headstrong, the one who could not be forced to do anything I did not want to do. I was moved by his consideration.

Still, I wondered if Rajiv had any doubts. He must have certain apprehensions about the way his life was about to change as well. I did not sense this at the time but, in retrospect, it must have been hard for him as well.

He returned to the States. We wrote letters and spoke on the phone. His letters were newsy and casual, which I appreciated. Once, most of his letter was his deconstruction of an episode of "Seinfeld." I was taken in by the irreverent but serious tone, glad he was not filling the letter with meaningless talk about the weather in New York or details of his work day. He suggested that in each letter we reveal one thing about ourselves -- a like or a dislike, a pet peeve or an idiosyncrasy. It did not have to be deeply personal, only what we were comfortable with. The back and forth was refreshing. Unlike a conversation, there were no interruptions.

A year later we married. We had only met a handful of times before then.

We have been married coming on 19 years. We have a lovely daughter. We’ve had real challenges balanced with great moments of joy. A sure sign of a decision well made is that I would do it all again. I had gone from no way to yes, from liking to loving. I now enjoy teasing my teenage daughter about the importance of listening to one’s parents. You never know who they will bring home to dinner.

Tania Malik is the author of the novel "Three Bargains." She received her degree from the University of Delhi and currently lives in northern California with her husband, daughter, and dog.