The atheist libertarian lie: Ayn Rand, income inequality and the fantasy of the "free market" 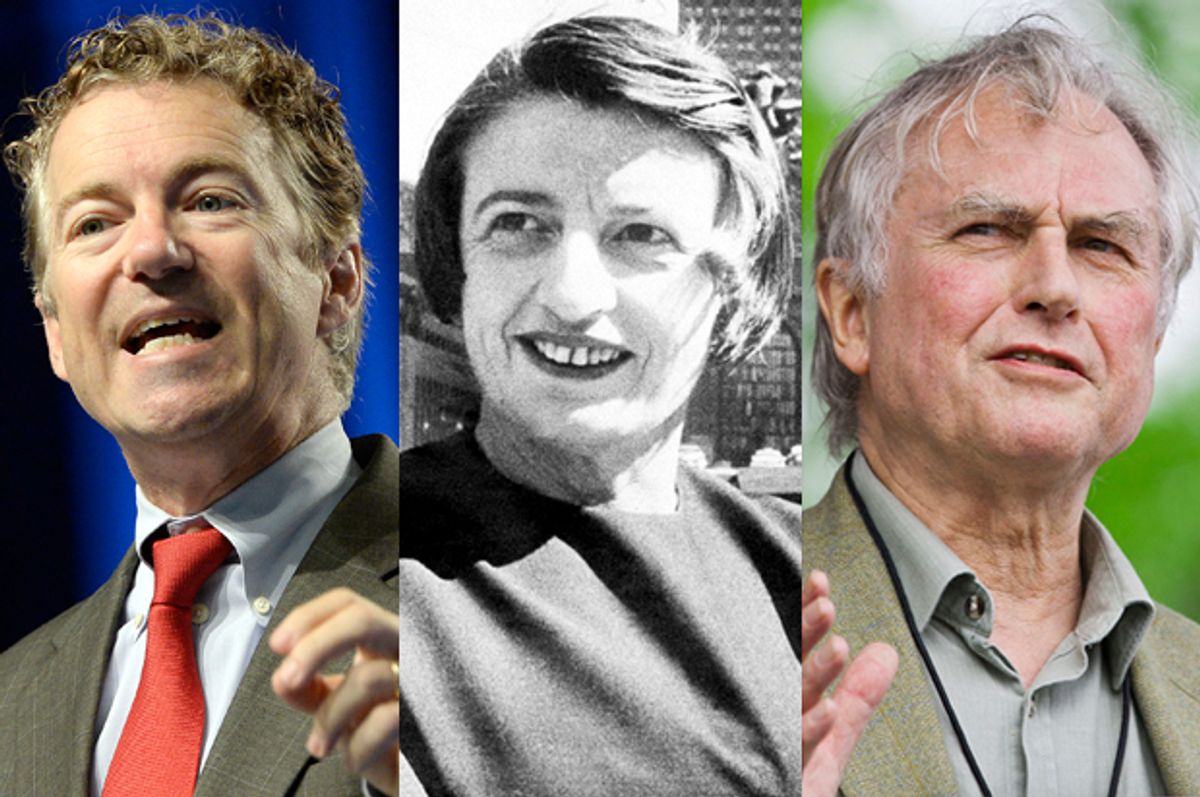 Why atheists are disproportionately drawn to libertarianism is a question that many liberal atheists have trouble grasping.  To believe that markets operate and exist in a state of nature is, in itself, to believe in the supernatural. The very thing atheists have spent their lives fleeing from.

Your second clue is that atheist libertarians are skeptical of government authority in the same way they’re skeptical of religion. In their mind, the state and the pope are interchangeable, which partly explains the libertarian atheist’s guttural gag reflex to what they perceive as government interference with the natural order of things, especially “free markets.”

Robert Reich says that one of the most deceptive ideas embraced by the Ayn Rand-inspired libertarian movement is that the free market is natural, and exists outside and beyond government. In other words, the “free market” is a constructed supernatural myth.

There is much to cover here, but a jumping-off point is the fact that corporations are a government construct, and that fact alone refutes any case for economic libertarianism. Corporations, which are designed to protect shareholders insofar as mitigating risk beyond the amount of their investment, are created and maintained only via government action.  “Statutes, passed by the government, allow for the creation of corporations, and anyone wishing to form one must fill out the necessary government paperwork and utilize the apparatus of the state in numerous ways. Thus, the corporate entity is by definition a government-created obstruction to the free marketplace, so the entire concept should be appalling to libertarians,” says David Niose, an atheist and legal director of the American Humanist Association.

In the 18th century, Adam Smith, the granddaddy of American free-market capitalism, wrote his economic tome "The Wealth of Nations." But his book has as much relevance to modern mega-corporation hyper-capitalism today as the Old Testament has to morality in the 21st century.

Reich says rules that define the playing field of today’s capitalism don’t exist in nature; they are human creations. Governments don’t "intrude" on free markets; governments organize and maintain them. Markets aren’t "free" of rules; the rules define them. “In reality, the 'free market' is a bunch of rules about 1) what can be owned and traded (the genome? slaves? nuclear materials? babies? votes?); 2) on what terms (equal access to the Internet? the right to organize unions? corporate monopolies? the length of patent protections?); 3) under what conditions (poisonous drugs? unsafe foods? deceptive Ponzi schemes? uninsured derivatives? dangerous workplaces?); 4) what’s private and what’s public (police? roads? clean air and clean water? healthcare? good schools? parks and playgrounds?); 5) how to pay for what (taxes, user fees, individual pricing?). And so on.”

Atheists are skeptics, but atheist libertarians evidently check their skepticism at the door when it comes to corporate power and the self-regulatory willingness of corporations to act in the interests of the common good. In the mind of an atheist libertarian, both religion and government is bad, but corporations are saintly. On what planet, where? Corporations exist for one purpose only: to derive maximum profit for their shareholders. “The corporation’s legally defined mandate is to pursue, relentlessly and without exception, its own self-interest, regardless of the often harmful consequences it might cause others,” writes Joel Bakan, author of "The Corporation: The Pathological Pursuit of Profit and Power."

Corporations pollute, lie, steal, oppress, manipulate and deceive, all in the name of maximizing profit. Corporations have no interest for the common good. You really believe Big Tobacco wouldn’t sell cigarettes to 10-year-olds if government didn’t prohibit it? Do you really think Big Oil wouldn’t discharge more poisons and environmentally harmful waste into the atmosphere if government regulations didn’t restrict it? Do you really believe Wal-Mart wouldn’t pay its workers less than the current minimum wage if the federal government didn’t prohibit it? If you answered yes to any of the above, you may be an atheist libertarian in desperate need of Jesus.

That awkward pause that inevitably follows asking a libertarian how it is that unrestricted corporate power, particularly for Big Oil, helps solve our existential crisis, climate change, is always enjoyable. “Corporations will harm you, or even kill you, if it is profitable to do so and they can get away with it ... recall the infamous case of the Ford Pinto, where in the 1970s the automaker did a cost-benefit analysis and decided not to remedy a defective gas tank design because doing so would be more expensive than simply allowing the inevitable deaths and injuries to occur and then paying the anticipated settlements,” warns Niose.

In the 1970s, consumer protection advocate Ralph Nader became famous for helping protect car owners from the unsafe practices of the auto industry. Corporate America, in turn, went out of its way in a coordinated effort, led by U.S. Supreme Court Justice Lewis Powell, to destroy Nader. The documentary "Unreasonable Man" demonstrates how corporate CEOs of America’s biggest corporations had Nader followed in an attempt to discredit and blackmail him. General Motors went so far as to send an attractive lady to his local supermarket in an effort to meet him, and seduce him. That’s how much corporate America was fearful of having to implement pesky and costly measures designed to protect the well-being of their customers.

Today America is facing its greatest moral crisis since the civil rights movement, and its greatest economic crisis since the Great Depression: income inequality. Now, income inequality doesn’t happen by accident. It happens by the political choices a country makes. Today America is the most income unequal among all developed nations, and we find ourselves here today not because of government regulation or interference, but a lack thereof. The past three decades have seen our political class become totally beholden to the armies of corporate lobbyists who fund the political campaigns of our elected officials. Today the bottom 99 percent of income earners has no influence on domestic policy whatsoever.

The unilateral control that Wall Street and mega-corporations have over economic policy is now extreme, and our corporate overlords have seen to the greatest transfer of wealth from the middle class to the rich in U.S. history, while corporations contribute their lowest share of total federal tax revenue ever. The destruction of labor; serf-level minimum wage; and the deregulation, monopolization and privatization of public assets have pushed us deeper into becoming a winner-takes-all society.

In effect, America virtually exists as a libertarian state, certainly when compared to liberal democracies found in Western Europe, Canada and Australia. In these countries, there’s a sense of "we are all in this together," but here the romantic idealism of the rugged individual allows corporate influence of the political class to gut public safety nets, eradicate collective bargaining, strip regulatory control of our banks, water, skies and our food.

By every measure, Australians, Scandinavians, Canadians, Germans and the Dutch are happier and more economically secure. The U.N. World Development Fund, the U.N. World Happiness Index and the Social Progress Index contain the empirical evidence atheist libertarians  should seek, and the results are conclusive: People are happier, healthier and more socially mobile where the size of the state is bigger, and taxes and regulations on corporations are greater. You know, the opposite of the libertarian dream that would turn America into a deeper nightmare.