I missed the life my husband and I had, and the more I heard about the joy of being a mom, the worse I felt 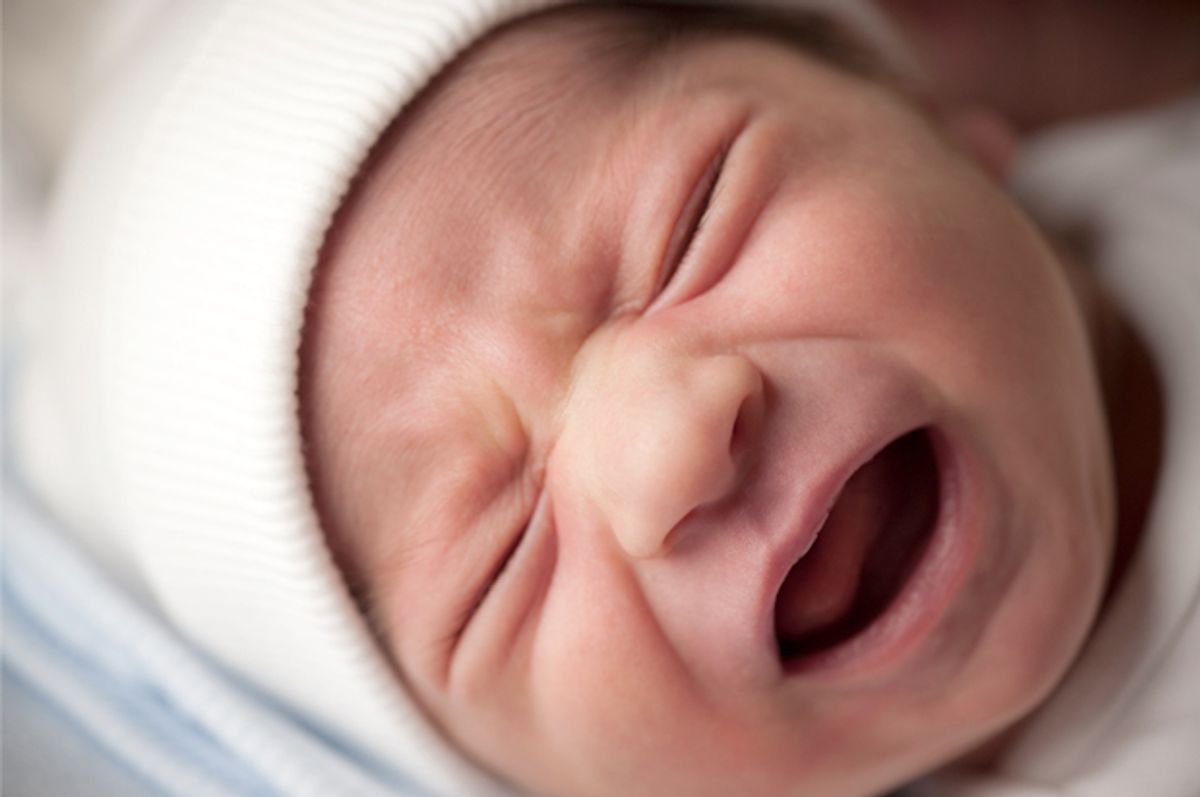 The old man in the wheelchair looked over, his eyes meeting mine from below the brim of his Buffalo Sabres cap.

I apologized for the infant squirming in my lap. It was mid-April, and Max, our baby boy, had wailed the entire way from the newborn ward of Sisters Hospital to the building’s main entrance. Now, as we waited for our ride by the facility’s revolving doors, Max continued to scream. But the old man wasn’t upset.

“A new life,” he told me in a quiet rasp, a smile behind his eyes.

I turned my head so he wouldn’t see the tears.

Growing up, I never wanted to be a mother. Until we had Max, I wasn’t sure how I would find the experience of being a parent.

My heart broke when he struggled with the simplest things — when he couldn't get milk flowing into his little mouth, or when he got the hiccups and couldn't stop them and didn't know what they were.

Sometimes, late at night, I would watch him, imagining how scared he must be. He would squeak and gurgle in his sleep. He often gasped. They say that infants have something called the Moro reflex, where they wave their arms because they feel as if they’re falling.

I loved our baby more than I ever could have predicted.

As time went on, though, I found that I did not like being a mother.

Everyone says, “Congratulations,” but no one tells you how hard it will be.

I often felt that having a kid was the worst decision I ever made. When one friend kept asking, "But it's a wonderful time, too, isn't it?" I kept replying, "No."

There is an episode in “Battlestar Galactica” where humans being hunted by Cylons find that the pursuers are able to pinpoint the people’s location every 33 minutes. So every 33 minutes, the humans “jump” their convoy of ships to new coordinates in space, then reset the clock to prepare for the next maneuver.

This is what it feels like to have an infant in the house.

The baby needed to eat every two or three hours. Feeding him and changing his diaper usually took about 45 minutes. Then, he would burp and flail about for another half hour before falling asleep.

When that happened, we'd rush to grab some food or close our eyes to rest before the bomb went off again and Max needed to be fed.

I cried all the time.

I missed the life that my husband and I once had.

In the minutes before I drifted off to sleep, I'd think about all the things we’d done together — moving to Buffalo, getting married, buying a house. I'd think about our wedding reception, which we held in a tent in our backyard, with Indian food and submarine sandwiches and beer pumped out of a keg.

My friends tried to console me: It will get better, they said. But for me, in the months ahead, it only got worse.

He is four months old now, our little Max.

The world — his world — is a blur, a whirlwind of strange colors and new sounds: Voices. Leaves rustling in the wind. Cars honking. Sirens. Thunder. The roar of rain splashing against the sidewalk in the heart of a storm.

We show him things: ducks in a pond, spots of sunlight dancing in a canopy of trees. We demonstrate how to eat ice cream with a spoon. We tell him about root beer floats.

Meanwhile, I alternate between euphoric highs and terrible lows.

I watch in amazement as Max changes. He learns to hold his head steady. He discovers his hands. He bats at toys, then grabs them. Suddenly, one day, we notice that he can see us from all the way across the room. He smiles during his nightly bath. He laughs.

It all happens so fast.

These are the lovely moments, the ones I hope to remember in the years to come. I store them in my mind's eye, each one a small jewel, a beautiful photograph.

But mostly, being a mother has been hard.

Max does not have an easy temperament. He is, as our pediatrician tells us, "extreme." Week after week, from April through July, he screamed, arching his back in misery, tears pooling in his eyes.

Newborns need to nap for much of the day, but Max would not sleep. We tried to soothe him, holding him and walking him around the house. We rocked him gently, whispered in his ear and sang to him. We placed him in his crib. Nothing worked.

Max hated car rides. He cried in the stroller. He wouldn't take a pacifier. He refused to drink milk out of a bottle, so I couldn't leave him with a babysitter for more than two or three hours.

Once, when Max was upright in the car seat, my husband pointed out that even his belly button frowned. It formed an upside-down crescent, grimacing at us from the center of his fat tummy.

We had lots of help. Friends and colleagues brought food. My husband’s sisters, Hannah and Emily, had babies of their own and provided support. My mother- and father-in-law, Nan and Mike, came over often to watch Max, as did my husband’s aunts, Patty and Sue.

When finally, after much experimentation, we figured out what Max liked, it was almost as bad as not knowing: He'd fall sleep when we did squats with him in our arms.

The up-and-down elevator motion calmed him. So five, six, seven times a day, I strolled him around our block, doing crazy baby aerobics. Up! Down! Up! Down!

I got to know our neighbors. I lost all my pregnancy weight.

But I also lost myself; I had no life outside of Max. I became depressed. I started Googling things like “I hate being a mom.”

I was too tired to go out to coffee or dinner. One beautiful Sunday in June, my husband and I invited friends over to grill, then asked them to entertain themselves because we were too exhausted to take part.

On and on it went. Weeks evaporated, then months, as I bounced Max, performing deep squats on our porch. His little eyes popped open whenever I tried to lay him down, so to keep him sleeping, I took to toting him around the house in a sling.

Max needs to see the doctor.

Your baby is in pain.

Maybe he has gas.

His cry is throaty. It could be asthma.

Are you breastfeeding? Yes? You should try cutting cheese out of your diet. Stop eating onions. Stay away from spices.

People suggested that the baby was screaming because it was too hot outside, or too cold, or too humid.

Our doctor disagreed: Max was just an extremely fussy kid, she said. He was born that way. He was healthy, gaining plenty of weight, so we had nothing to worry about.

The reality is that science doesn't know exactly why some babies cry more than others.

We just needed to wait Max out. Three to four months, our pediatrician told us, is when most screamers calm down.

Four months in, we are battered souls. We have watched our baby cry for hours, sporting what we call the "perma-frown."

In August, we endured two weeks of erratic sleeping, during which Max suddenly started waking as often as every 45 minutes overnight. When I emailed a close friend from college to see if his 2-year-old ever did something similar, he said yes. In tough times, his wife related, the couple had made many a joke about "ways to blow up our own genitals so this never, ever, happens again." The message made me laugh. It made me feel less alone.

My husband and I are shells of the people we once were, but we can finally see glimmers of a better life ahead.

Max is still rather grumpy, but he has started smiling a lot more. He chuckles when I tickle his chin rolls. I can put him down now while he's sleeping, and he won't wake up. He's napping at the moment, in fact, while I'm typing this story. To have my hands back — it's liberating.

I hope that everyone is right and that things will continue to improve.

Through the long days and sleepless nights, the worst feeling has been that of guilt: guilt that I'm not (yet) happy to be a mother, that I don't (yet) enjoy taking care of Max.

I would do just about anything for him, but I find myself longing — often — for the life I left behind when we made the decision to have him.

In the past 10 years, I went to college in Los Angeles and studied Spanish in Madrid; I drove across America, coast to coast, four times; I traveled to Australia, to the other end of the world; I worked in Las Vegas, where I’d stand in front of the Bellagio on days when I was sad so I could watch the pageantry of the Strip: drunken revelers laughing with friends, lovers carrying out marriage proposals.

Now, my life is Max.

I know I am spoiled. I am gainfully employed, with five and a half months of maternity leave. I am married to an incredible, interesting man. I have a beautiful, healthy baby boy.

I still read the newspaper every day, and I see articles about people who are sick and dying, about families fleeing war, about hemorrhagic fever spreading in West Africa. These stories remind me of how lucky I am — lucky to live in peace, lucky to have Max, lucky to have the means to protect him from harm.

My husband and I always said the rewards of having children would come later, after the crying and diapers.

The afternoon we came home from the hospital with Max, my mind filled with images of the future; I pictured him as a little boy and wondered what the world would look like when he was older, and it made me want to be a better person, to make people happy, to do good, to produce less trash.

My husband and I often talk about all the things we want to show to Max later on, when he can understand. We want to take him to the zoo, teach him the names of all the U.S. presidents and tell him about the places the two of us have traveled, and the places we would like to go.

I can’t wait to see little Max taste ice cream for the first time, to watch him play in the snow. I can't wait to see what kind of person he becomes — a good one with worthy dreams, I hope.

I could have spent the long days of summer hiking, road tripping and drinking beers on the porch, relaxing outside while listening to the hum of cicadas and drumbeat of warm rain. It would have felt awesome.

But in the end, despite my gloom, there's nothing more important that I could have been doing other than squatting with Max — than giving the little person we created a loving start in a difficult world.

Charlotte Hsu wrote this piece in early August. She wants the parents of colicky babies to know that Max is now a delight, and she is finally happy to be a mother. She can be reached at char.hsu@gmail.com. Follow her on Twitter @charlottetsu.