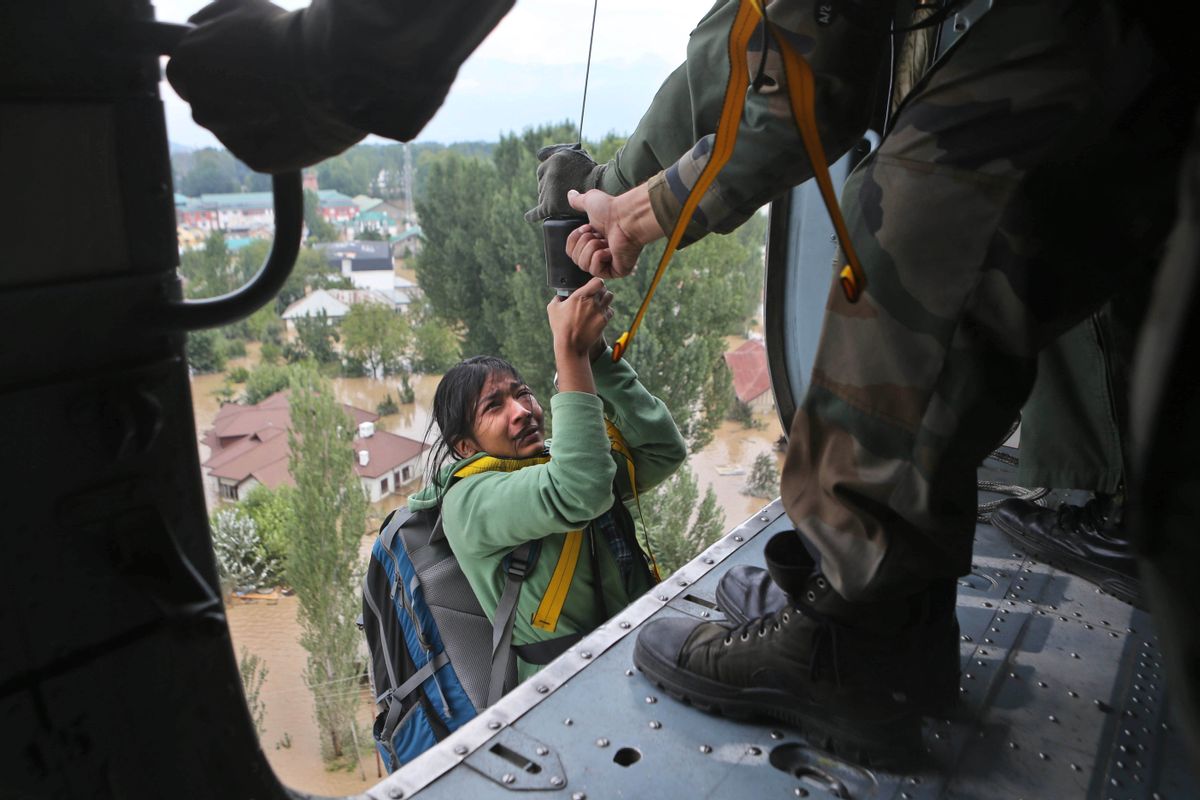 In this Tuesday, Sept. 9, 2014, an Indian tourist cries as she is airlifted into a chopper in Srinagar, India. The death toll from floods in Pakistan and India reached 400 on Tuesday and have put more than half a million people in peril and rendered thousands homeless in the two neighboring states. The tourist was stranded on the terrace of a five-storey hotel in central Srinagar. (AP Photo/Dar Yasin) (AP)
--

Flooding from days of heavy monsoon rains partially submerged the city of Srinigar in Kashmir and left more than 400 people dead in northern Pakistan and India. The flood waters have begun to recede, but vast fields of crops have been destroyed and tens of thousands of families have lost all their possessions.

Japanese were thrilled to see one of their own, Kei Nishikori, become the first Asian man to play in a Grand Slam tennis final. Ultimately, the 24-year-old lost to Croatian Marin Cilic in the lopsided U.S. Open final, but Nishikori's run is expected to boost his career and tennis' popularity in a country where baseball and soccer reign.

After a 90-minute trial, North Korea's Supreme Court convicted American Matthew Miller, 24, of entering the country illegally to commit espionage and sentenced him to six years of hard labor. Miller was detained after tore up his tourist visa upon arriving at Pyongyang's airport in April. He is one of three Americans being held in North Korea.

Health workers in the Philippines vaccinated children as part of a month-long campaign to immunize 13 million kids against measles, rubella and polio.

Vivid tiger faces were painted on the bodies of dancers in the annual Pulikali, or Tiger Dance, in the southern Indian state of Kerala, as part of the annual harvest festival.

If the full moon appeared bigger and brighter last week, that wasn't an illusion. Last Tuesday's so-called supermoon, or perigee moon by scientists, happens when a full moon coincides with the closest approach to Earth in its elliptical orbit, making it appear larger.