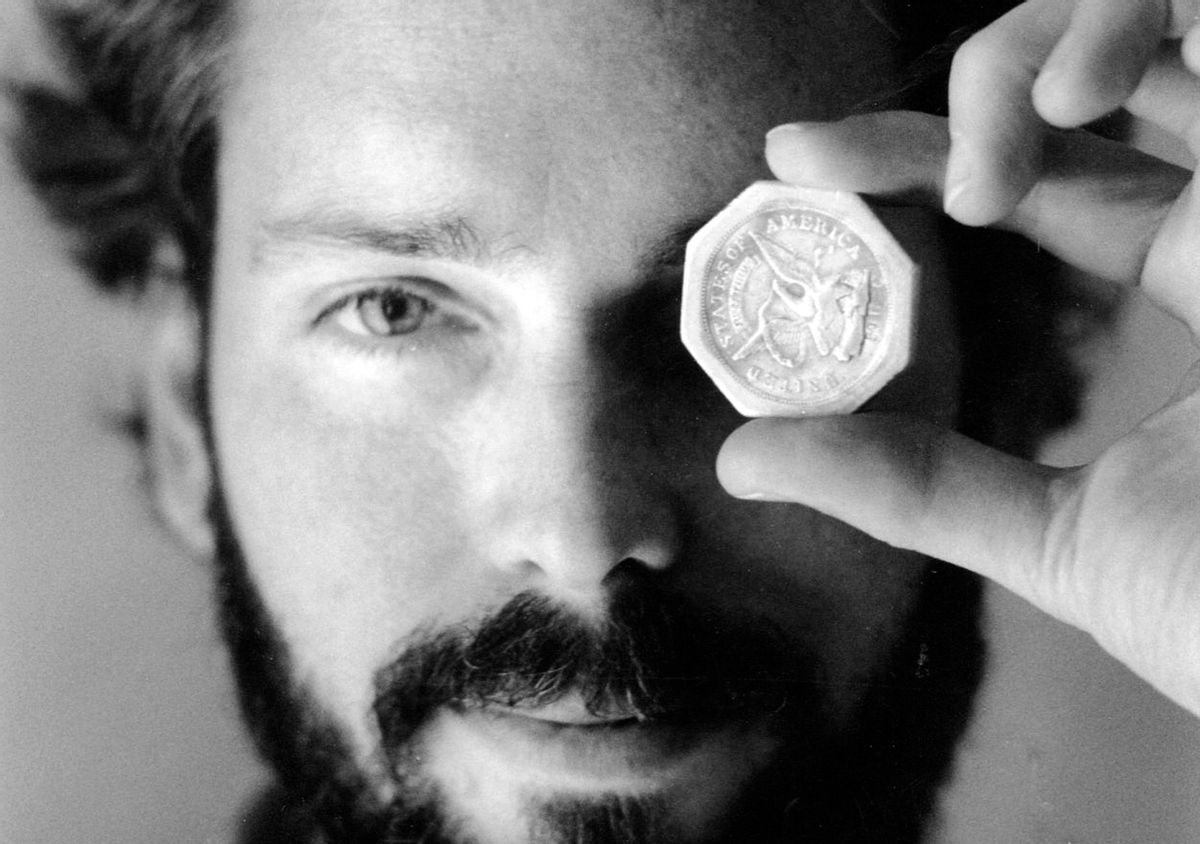 In this November 1989 photo, Tommy Thompson holds a $ 50 pioneer gold piece retrieved earlier in 1989 from the wreck of the gold ship Central America. Thompson led a group that recovered millions of dollars worth of sunken treasure only to end up involved in court cases brought by dozens of insurance companies laying claim to the treasure. (AP Photo/The Columbus Dispatch, Lon Horwedel) (AP)
--

COLUMBUS, Ohio (AP) — One of the last times anyone ever saw Tommy Thompson, he was walking on the pool deck of a Florida mansion wearing nothing but eye glasses, leather shoes, socks and underwear, his brown hair growing wild.

It was a far cry from the conquering hero who, almost two decades before, docked a ship in Norfolk, Virginia, loaded with what's been described as the greatest lost treasure in American history — thousands of pounds of gold that sat in the ocean for 131 years after the ship carrying it sank during a hurricane.

On that day in 1989, Thompson couldn't contain a grin as hundreds cheered his achievement. But his victory was short-lived.

For the past two years, the U.S. Marshals Service has hunted Thompson as a fugitive — wanted for skipping a court date to explain to investors what happened to the riches. The rise and fall of the intrepid explorer is the stuff of storybooks, a tale receiving renewed attention amid a new expedition begun this year to the sunken ship.

"I think he had calculated it, whatever you want to call it, an escape plan," Marshals agent Brad Fleming said. "I think he's had that for a long time."

Around 1983, Thompson grew obsessed with tracking down the SS Central America. When the ship went down off the South Carolina coast in 1857, 425 people drowned and gold worth millions was lost.

Thompson, an oceanic engineer at Battelle Memorial Institute in Columbus, convinced 161 people to invest in his quest, raising $12.7 million. On Oct. 1, 1988, he finally found the treasure, which he would later describe as "otherworldly in its splendor."

But his joy faded fast. Thirty-nine insurance companies sued Thompson, claiming they had insured the gold in 1857 and that it belonged to them. In 1996, Thompson's company was awarded 92 percent of the treasure, and the rest was divided among some of the insurers. Four years later, Thompson's company netted $50 million after selling 532 gold bars and thousands of coins to a gold marketing group.

Yet his legal troubles weren't over.

By 2005, Thompson's investors still had not been paid, and two sued — a now-deceased investment firm president who put in some $250,000 and the Dispatch Printing Company, which publishes The Columbus Dispatch newspaper and invested about $1 million. The following year, nine members of Thompson's crew also sued, saying they, too, were promised some proceeds.

Thompson went into seclusion, moving into a mansion in Vero Beach, Florida. After that, his behavior turned bizarre.

Thompson refused to use his real name on his utility bills, telling realtor Vance Brinkerhoff that his life had been threatened and asking him, "How would you like to live like that?" Brinkerhoff recounted the exchange in a court deposition.

In another deposition, maintenance worker James Kennedy recalled once going to the house and seeing Thompson on the pool deck wearing only socks, shoes and dirty underwear. "His hair was all crazy," Kennedy said. "After that, me and (a friend) referred to him as the crazy professor."

It's not clear exactly when Thompson disappeared. On Aug. 13, 2012, he failed to appear at a hearing in the court battles, and a federal judge found him in contempt and issued an arrest warrant. Not long after, Kennedy went inside the Florida mansion and found pre-paid disposable cellphones and bank wraps for $10,000, along with a book called "How to Live Your Life Invisible."

The Marshals Service has splashed Thompson's face on electronic billboards and run down hundreds of tips — from the guy who thought he might have shared an elevator with Thompson to a report that the name "Tommy" was signed on a memorial website for a dead friend of the treasure hunter. Nothing has panned out. A "Wanted" poster even hangs in the barge making a new voyage to the Central America in a new expedition to recover more treasure from the "Ship of Gold."

Since April, Florida-based Odyssey Marine Exploration has brought up millions of dollars in gold and silver bars and coins. That work will continue indefinitely, an Odyssey spokeswoman said, and Thompson's original investors are expected to receive part of the recovered riches.

An attorney for the investors who sued did not respond to requests for comment, nor did a number of the investors.

As to where Thompson, now 62, might be, theories abound. The crew members' attorney, Mike Szolosi, asserts that he's seen records indicating Thompson took 500 gold coins worth $2 million and took potentially millions from his own company on top of his approved compensation.

"Presumably all of that is still somewhere with Tommy," he said.

Attorney Rick Roble, who defended Thompson's company until he withdrew from the case last month, said there's no proof Thompson stole anything.

Author Gary Kinder, who chronicled the treasure hunt in "Ship of Gold in the Deep Blue Sea," said nothing in his time with Thompson gives him any insight into his whereabouts. "I don't know what it would entail to hide like that. Get your teeth fixed? Buy a blond wig?"

Agent Fleming believes Thompson is likely still stateside, although "we definitely never rule out ... that he may be abroad or at sea."

If caught, Thompson would be asked to account for the missing coins and explain where proceeds from the treasure's sale went. He could face jail time and hefty fines if he refuses.

Gil Kirk, a former director of one of Thompson's companies, said he put $1.8 million into the treasure hunt. Though he hasn't gotten any of that back, Kirk still supports Thompson and insists he never bilked anyone.

To Kirk, Thompson remains an American hero, "like the Wright brothers." The tragedy, he said, is that Thompson's dream became his doom.

"Tommy used the word, what's the word?" Kirk said. "Plague of the gold."