Or, why Todd Staples is full of crap 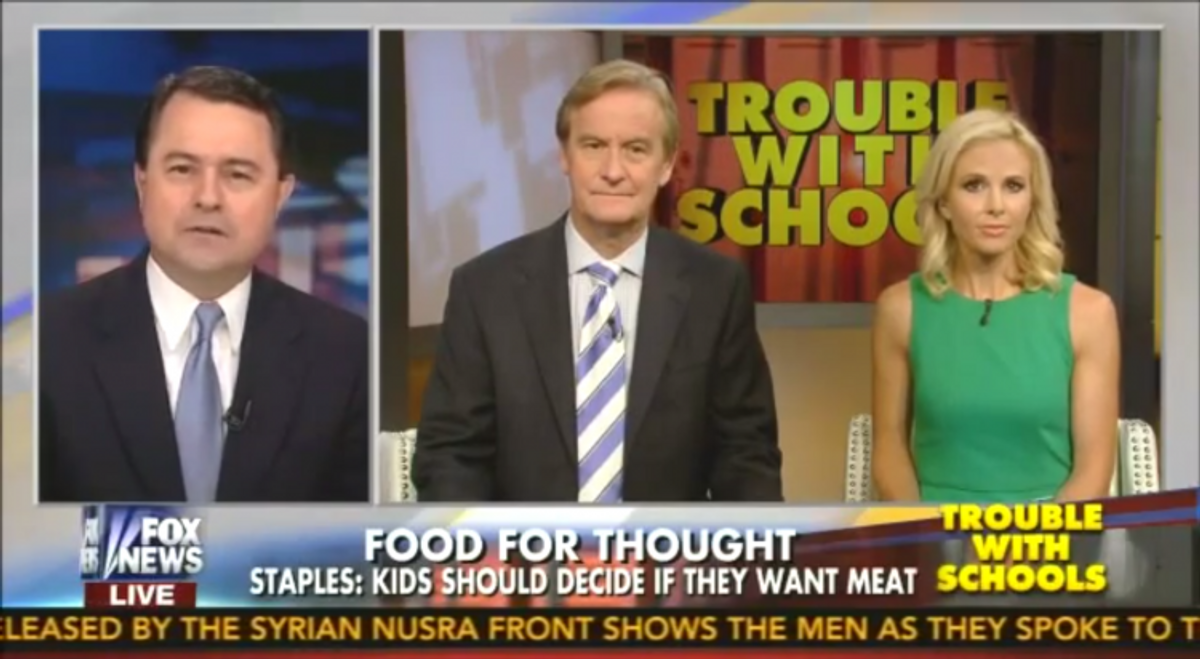 Texas Agriculture Commissioner Todd Staples recently published an op-ed in the Austin American-Statesman in which he condemned school districts that instituted a "Meatless Monday" program, which involves cafeterias serving vegetarian fare one day per week. On Monday, Fox News hosts Steve Doocy and Elisabeth Hasselbeck invited Staples to back up his views on the air:

"Our schools are doing a really fantastic job of meeting the nutritional needs and educational needs of our kids," said Staples. "But what we have here is a 'Meatless Mondays' campaign that's really an agenda-driven campaign. And the people who are behind this, they don't want you to not just eat meat one day a week, but seven days a week. Obesity and unhealthy lifestyles are caused because of inactivity and because of not having a balanced diet. It's just sending the wrong message to our kids. This is not about meat-- it's about hunger, and we need to educate our kids the right way and not have agenda-driven campaigns."

"So you say that Meatless Mondays are brainwashing?" Doocy asks.

"Clearly it is because we know that a balanced diet is what children need. And the people that are pushing this are saying that having Meatless Monday options is somehow a healthier option menu and that it's better for the environment. This all stems from anti-animal agriculturalists who are trying to blame animals for some of our environmental problems... They shouldn't castigate one type of food category and give the false impression to our kids that this is healthier for the environment and healthier for them as individuals."

Not only does Staples conveniently refuse to back his argument up with any facts, but he also neglects to reveal what is likely his primary motivator: money. As of 2012, Texas led the country in livestock production in general, an industry which generated $18 billion for the state, while agriculture and livestock exports alone were valued at $5.3 billion. Texas leads the country in the production of cattle, sheep and goats, as well as in beef and veal exports.

Additionally, a huge portion of his campaign funds came from agriculture and livestock, with the agriculture sector donating $266,000 in total and the livestock industry alone donating over $100,000. The Texas Farm Bureau and the Texas & Southwestern Cattle Raisers Association were two of his top ten contributors, donating a total of $90,000.

Clearly, Staples is not an unbiased voice of the people.

Staples smears the Meatless Monday campaign as pure "propaganda." In reality, beef produces twice the emissions of pork, four times as much as chicken, and 13 times as much as veggie proteins like beans, lentil and tofu. According to the Environmental Working Group, "if your four-person family skips steak 1 day a week [for a year[, it's like taking your car off the road for almost 3 months." Health benefits of a vegetarian diet include a reduced risk of heart disease, high cholesterol and some kinds of cancer.

The nonpartisan Meatless Monday was started in 2003 in association with the Johns Hopkins Bloomberg School of Public Health in an effort to reduce the global consumption of meat by 15 percent.