Rand Paul's latest headache: He'd repeal all executive orders! (Except for the ones he wouldn't!)

Rand Paul won applause for saying he'd repeal all executive orders, ever. But then came the follow-up questions ... 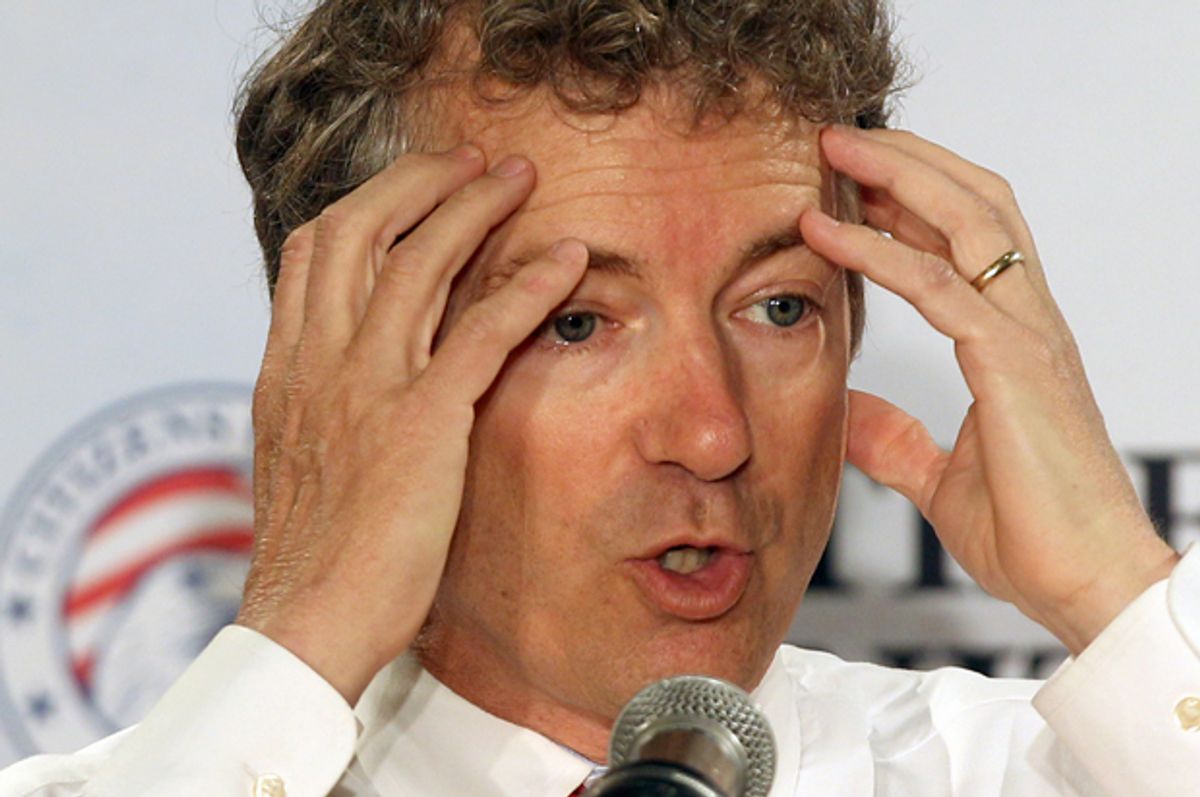 Sen. Rand Paul frequently does this thing where he makes some grand pronouncement and then has to backtrack on what he's saying, or say the complete opposite and pretend that that's always been his position. This is called "flip-flopping" sometimes. It's not the worst thing in the world every now and then -- we all change our minds -- but when it becomes clear that a politician's stance on any given issue tends to align with the political winds of the moment, it becomes an unflattering trait. Articles are written about it. Reputations become established. Bad.

One of the political winds of this moment in Republican politics is that President Obama exceeds his authority in pursuing executive actions -- any of them. The office of the presidency, according to contemporary GOP scholarship, has the power to do approximately nothing; should the president do anything greater than nothing -- "something" -- then he is a tyrant, a dictator, an imperial president and a criminal. The thick binder of legal literature backing this GOP theory du jour can be summed up as follows: President Obama is a Democrat, so he's not allowed to do anything. It is a powerful claim.

So what better line was there for a political windsurfer like Paul to drop in New Hampshire last week than, "I think the first executive order that I would issue would be to repeal all previous executive orders." This line, according to Real Clear Politics' Scott Conroy, was met with "booming cheers." Who doesn't love booming cheers?

The problem with the line, despite its initial reception, was that it was a silly thing to say.

First, he's suggesting that presidents do not have the authority to issue executive orders. (Except for the executive order to end all executive orders.) Why even bother having a president, then? It would be easier (and cheaper) to just install an Autopen in the Oval Office to sign whatever legislation comes its way. The Autopen would only be able to serve two terms, constitutionally, so afterward it could be replaced by a new Autopen II model or an Apple Watch or something. This would be an extraordinarily disruptive model sure to garner critical financial and political support from Silicon Valley, but the entrenched, moss-covered traditionalists inside the Beltway would never go for it.

And then there's the problem that a lot of executive orders have been very good. Would Paul seriously take them off the books? Conroy quizzed Paul on these things the following morning.

In an interview with Real Clear Politics the next morning, Paul at first suggested that he indeed had been honest about getting rid of over two centuries of executive orders, if he were to be sworn in as the 45th commander-in-chief in 2017.

“It’s a nice idea,” Paul said. “You would obviously have to look at all of the executive orders to see that there’s not something in there. But the thing is, you could sunset them all and really repeal them all, and then you could start over. And if there are any ones that are good, you could reinstitute things or ask Congress to reinstitute things that need to be done.”

But did that mean Paul would be OK with nixing -- temporarily, at least -- President Lincoln’s Emancipation Proclamation?

Or what about President Truman’s order to desegregate the military?

Paul’s eyes widened a bit, as if to confirm that he hadn’t quite thought it completely through.

“Well, I mean, I think those are good points, and it was an offhand comment, so obviously, I don’t want to repeal the Emancipation Proclamation and things like that,” he said. “Technically, you’d have to look and see exactly what that would mean, but the bottom line is it’s a generalized statement that I think too much is done by executive order, particularly under this president. Too much power has gravitated to the executive.”

Paul's communications rep is unhappy that people are paying so much attention to and picking apart the senator's dumb comment. Who can blame her? She tweeted this morning that Paul's comment was "not meant to be taken literally"; it was simply meant to be a frivolous over-the-top criticism against President Obama. And we can all see the nobility in that. But it's good to know that a President Paul would devote time and resources toward sunsetting all of the executive orders in American history, combing through them, and then determining which should be "reinstituted" through either new executive orders or acts of Congress. This gargantuan effort seems certain to be exactly what the American people want from their government in 2017 and not at all the excremental side effect of a hasty campaign line subjected to follow-up questions.

One sad thing that Democrats have learned in the Obama era is that presidents, no matter what they say on the campaign trail when they're members of Congress and the president is a member of the opposite party, do not readily cede power back to the legislative branch. Why would they do that? They're presidents, they like having power. It's hard to take seriously anything Paul, or other Republican presidential aspirants, are saying right now about what grand powers they'd restore to Congress once they're sitting at the opposite end of Pennsylvania Avenue.