Want to understand why it's so hard to win the most basic gun safety reform? Here's how the debate so often goes 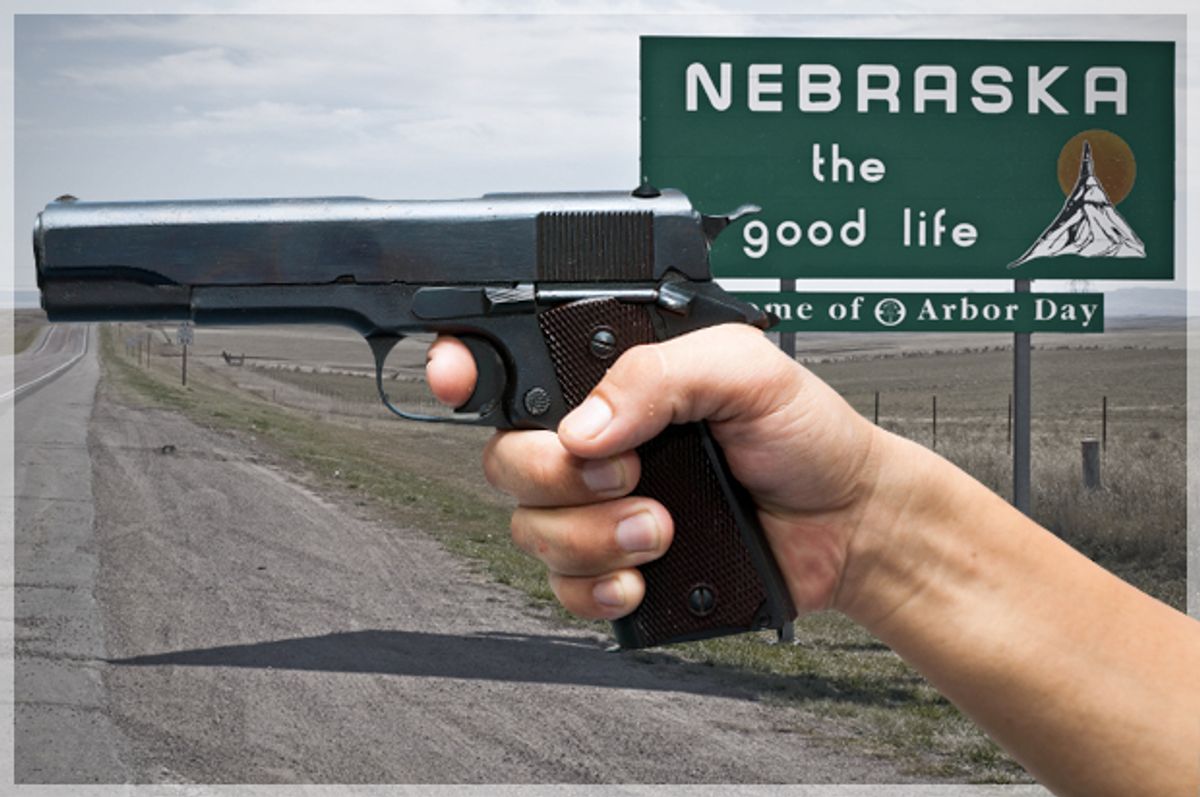 I volunteer for Nebraskans Against Gun Violence, a grass-roots organization seeking to reduce gun casualties by calling for an increase in the “responsible” part of “responsible gun ownership.” In May, NAGV called the head of public relations at Texas Roadhouse, a popular steakhouse, to inform him that a Nebraska "open carry" group was planning a meet-up at one of their locations. The open carry group had chosen a location just outside of Omaha in order to avoid Omaha’s supposedly oppressive permitting requirement that people carrying loaded guns in public undergo eight whole hours of training (elsewhere in the state, no training is required for open carry).

The corporate office forced the local store to cancel the event, and the open carry group contacted the press about this tyranny. One sympathetic media personality was Chris Baker, an AM shock jock in Omaha who was fired from a job a few years ago for saying liberal protesters should be mowed down with machine guns -- and who now makes a living selling gold bullion by stretching minor news and puddle-deep political insights into four hours of hate spew every weekday afternoon.

Baker invited NAGV on his show. On behalf of the organization I declined by email, explaining that given his track record I didn't think we'd get a fair chance to present our views. Baker mocked me on air, deeming me a "moon bat." Case closed, I thought.

But the next day he started up again, and I mentioned it on my personal Facebook page, garnering the interest of Lt. Col. Robert Bateman, who writes on gun policy for Esquire. Bateman called in, and Baker deemed him a "fake" and a "liar" who was not even in the military but who was also “disgracing the United States armed services” (difficult to do when one is not even in the military, it would seem). He said Bateman was “belligerent” and had "bullied" him, and he encouraged listeners to weigh in on Bateman's credentials.  He called my organization "wretched, disgusting commie leftists." This went on for an hour ... about an Army combat vet. Finally, he concluded that Nebraskans Against Gun Violence — a group of professionals and parents, some of whom are gun owners — smoked pot and conspired to get someone to call in pretending to be an Army officer to hijack his show.

Baker has mastered the art of the conspiracy theory, the agile evasion of cognitive dissonance that has become the modus operandi of right-wing media at both national and local levels. For people like me, volunteers hoping to put a dent in one of our country’s most difficult problems, the biggest obstacle we face is not any particular policy point, but the refusal of a portion of our population to enter a debate in good faith. When a fact doesn’t fit, they simply deny it, or better yet, conclude it is part of a sinister plot by communists, Muslims or the UN. National media figures such as Glenn Beck and Alex Jones are famous for these maneuvers, but they’ve trickled down to local media and to conversation-level micro-denials as well, and they have poisoned the public sphere.

In the last month I’ve read conspiracies claiming that Common Core has dropped cursive in an effort to make our founding documents illegible to us so that the Muslim takeover can begin, and that the UN is preparing to attack America from their staging ground in Alabama. Gun violence-prevention activists see Sandy Hook truthers who claim the slaughter there was orchestrated by Obama, gun extremists who say that the outrageous open carry crowd who brandish assault weapons in family restaurants are actually liberal operatives paid to make gun owners look bad, and that the murdered children of women I know never even existed. The goal is not to believe what is true or even humane, but what is easy and what makes you feel superior in a world that has not offered you the successes you expected. There are verifiable collusions that promote violence in the United States — the financial ties between gun manufacturers and the NRA; the gun lobby’s role in dismantling state and local gun laws — but those are of no concern to denialists and conspiraphiles. Only fantastical tales of socialist/atheist/Islamofascist gun-grabbers, who start by disarming the populace and end by locking you in a FEMA camp, need be entertained.

In this context of deliberate misinformation and disbelief, we can’t even get to a debate about effective policy points because we’ve first got to overcome denialism about basic facts. NAGV recently posted a photo of a sign on an Omaha street advertising a lost AR-15 rifle. The photo was picked up by a national gun reform group, and commenters insisted it was a fake, even as Omaha residents confirmed they had seen it. Presumably some people think it’s preposterous that in a state where almost anyone can own an AR-15 there might be bad apples among those who own one. But if there aren’t really bad guys with guns out there, why do so many people need to arm themselves against them?

Baker’s denialism was disconcertingly agile. As soon as he was confronted with something that didn’t fit — an unexpected call from a veteran who doesn’t want to see 100,000 of his fellow citizens hurt or killed by guns every year — he was able to devise a conspiracy theory. Gun reformists regularly face micro-denials like this — for instance, when I recently told a friend that the negligent gun deaths of children are often not prosecuted, he simply didn’t believe me. “No, I just don’t believe that, sorry,” he said. “Those cases have got to be rare.” This despite a rash of such cases, including 4-year-old Zoie Dougan, shot in the head by a family friend who was target shooting, or 9-year-old Shayla Schonneker, killed when her mother’s boyfriend played quick-draw with his gun. Like many other negligent child-killers, neither adult was charged with a crime.

More troubling to me than these denials was a joke Baker made when a liberal caller phoned in to argue with him. Baker dubbed him a “borderline school shooter,” reducing the horror of gun violence against America’s children to a cheap political joke.  School shooters are all liberals, the absurd urban legend says, and so anyone who rails against Baker is the problem. No need to entertain life-saving policy changes; the problem isn’t gun accessibility, the listener can think, it’s those liberals.

Gun violence prevention activists in Oklahoma had a similar run-in with willful misinformation in right-wing media a few months ago. Volunteers from Moms Demand Action as well as unaffiliated gun reformists had gone to a farmer’s market in Tulsa to get people to pledge to be gun-sense voters. A group of open carry activists came to the farmer’s market armed to confront the volunteers.  When it began to rain the volunteers left for Chipotle, which they had advertised on Facebook, and arrived there to find open carriers already awaiting them. When a volunteer asked if Chipotle had a policy prohibiting weapons — the company had recently announced one — the manager said she had seen a memo about it but was unaware of any official policy on the matter. The open carriers continued the “conversation” about gun rights, and eventually the volunteers left with no further interaction with the management.

This didn’t stop one of the open carriers from writing a fact-scant propaganda piece for the website Freedom Outpost, whose recent headlines include “Obama to Force Militant Homosexual Agenda on Entire World” and “What More Can Barack Obama Do to Destroy America Before He Leaves Office?” In the piece, the author admits to taking a group of armed men to Chipotle to confront the unarmed volunteers. He acknowledges that Chipotle doesn’t want open carry in its stores and says they expected they would be asked to leave. Yet he claims that the gun reformists — whom they had forced into an armed encounter at a restaurant with a no open carry policy — were kicked out for “rude behavior.” Chipotle refuses to comment on the incident, but the agreed upon facts — that openly armed men followed unarmed volunteers to a place that tries to prohibit open carry — make the idea that the gun extremists were somehow the victims prima facie absurd.

No matter. The story was picked up by gun-pushing hack sites wanting to embellish the story: The Truth About Guns called the gun reformists “bullies” and Guns ‘N’ Freedom said they were “harassing” the men with guns. And so the denialist digestion is complete, with a tense situation wholly caused by armed aggressors transformed into comforting reassurance of their righteous victimhood.