The Kentucky senator uses the debunked “McCain met with ISIS!” story to argue against a plan to arm Syrian rebels 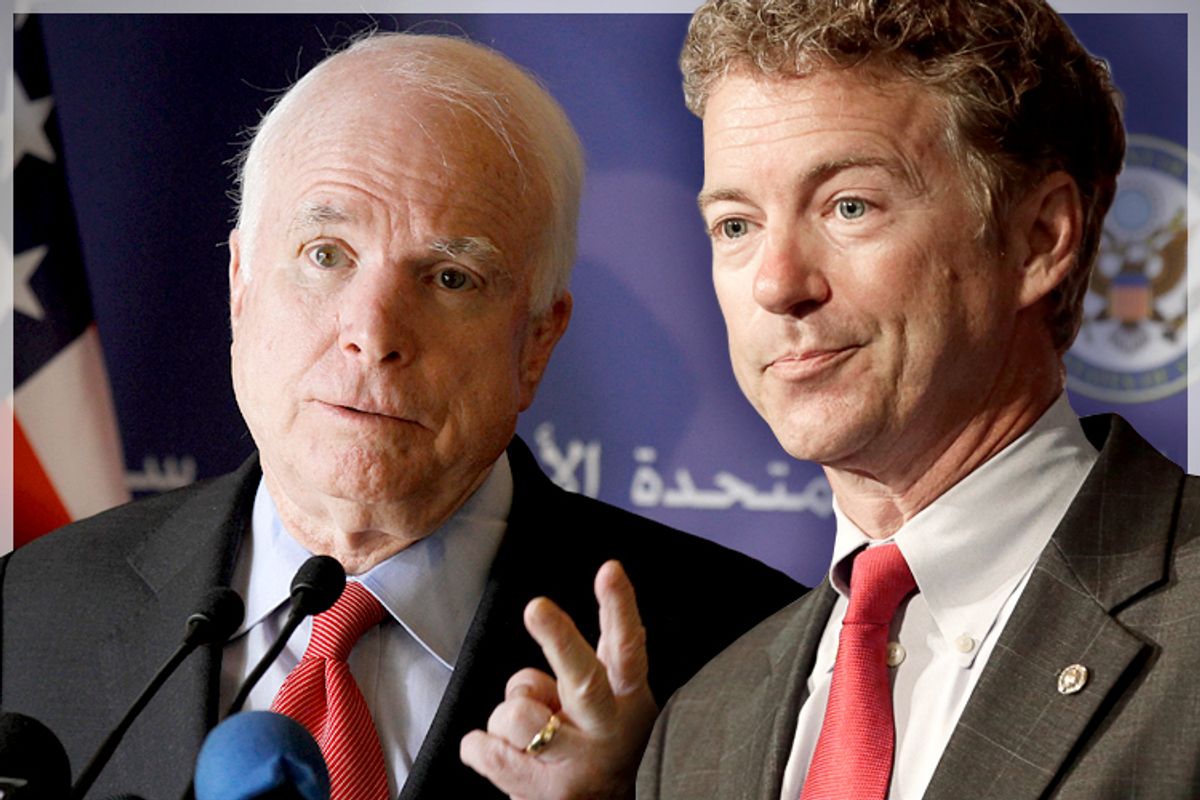 If you’re a critic of Sen. John McCain’s “more war” approach to most foreign policy problems, it was probably tempting to believe the story that he inadvertently met with ISIS leaders last year when he traveled to Syria to get acquainted with the “moderate” opposition to Bashar al Assad. Twitter is still swarming with photos of a grinning McCain allegedly arm in arm with various anti-American maniacs, including, by some accounts, the man who beheaded journalists James Foley and Stephen Sotloff.

Except that those peddling the “McCain met ISIS” story are wrong. The New York Times, among others, has debunked the whole thing, and explained who McCain’s Syrian hosts actually were: mostly Free Syrian Army leaders, some of them since killed by ISIS.* You can still argue against arming the Syrian rebels, but you can’t use the McCain story to show why it’s folly.

Unbelievably, as Paul tried to defend his very defensible opposition to arming the rebels in an interview with the Daily Beast’s Olivia Nuzzi, he resorted to tweaking McCain with the debunked “evidence” that the Arizona senator can’t be trusted when he says there are Syrian moderates the U.S. could be arming and training.

Here’s the problem. He [McCain] did meet with ISIS, and had his picture taken, and didn't know it was happening at the time. That really shows you the quandary of determining who are the moderates and who aren't. If you don't speak Arabic, and you don't understand that some people will lie to you -- I really think that we don't have a good handle on who are the moderates and who aren't, and I think the objective evidence is that the ones doing most of the fighting and most of the battles among the rebels in Syria are the radical Islamists.

This is classic Rand Paul. He doesn’t have the discipline to know that when you hear a story that good, you have to check it, and he hasn’t developed a staff strong enough to check their boss. It reminds me of when he defended Jack Hunter, his staffer with the white supremacist history, by blithely trashing Abraham Lincoln as a racist, using a debunked Lincoln “biography” that’s a staple of white nationalist reading lists that trash Lincoln as the tyrannical usurper who waged the War of Northern Aggression.

Paul is not always wrong; on foreign policy, he’s often right. Despite my skepticism, I applaud his efforts to reach out to African-Americans, and I genuinely support his work with Sen. Cory Booker on criminal justice reform. But then he does something silly, like promising, if elected president, to undo every presidential executive order in history. Asked whether that would include little things Lincoln’s Emancipation Proclamation and Harry Truman’s order to desegregate the military, he backtracked a bit.

Well, I mean, I think those are good points, and it was an offhand comment, so obviously, I don’t want to repeal the Emancipation Proclamation and things like that. Technically, you’d have to look and see exactly what that would mean, but the bottom line is it’s a generalized statement that I think too much is done by executive order, particularly under this president. Too much power has gravitated to the executive.

Not surprisingly, McCain went off on Paul when contacted about the ISIS remarks by the Daily Beast. "I can't believe Rand is still repeating this stuff, which came from a Hezbollah newspaper in Lebanon! He's getting his information from Hezbollah. It's outrageous … I don't know if Rand is dishonest or misinformed."

This is why many Democrats fail to quake when presented with evidence that Paul’s anti-interventionism will make him a threat to someone like Hillary Clinton in 2016. He is, indeed, the anti-Clinton – prone to speak first, think later, while the former secretary of state carefully considers every semicolon when speaking to the media.

Paul will take to the Senate floor Wednesday afternoon to explain his opposition to arming the Syrian rebels. Here’s hoping he thinks first for a change. It’s too important an issue to be marginalized by amateurish cheap shots and easily debunked stories about people who disagree with him.

*It’s still possible that someone McCain met in Syria has since joined up with ISIS, because it’s chaos over there, but none of the photos cited as evidence prove any such thing.