Red meat is destroying the planet, and the Frankenburger could help save it

Cattle manure is responsible for 65 percent of the atmosphere's nitrous oxide. Lab-grown meat may offer a solution 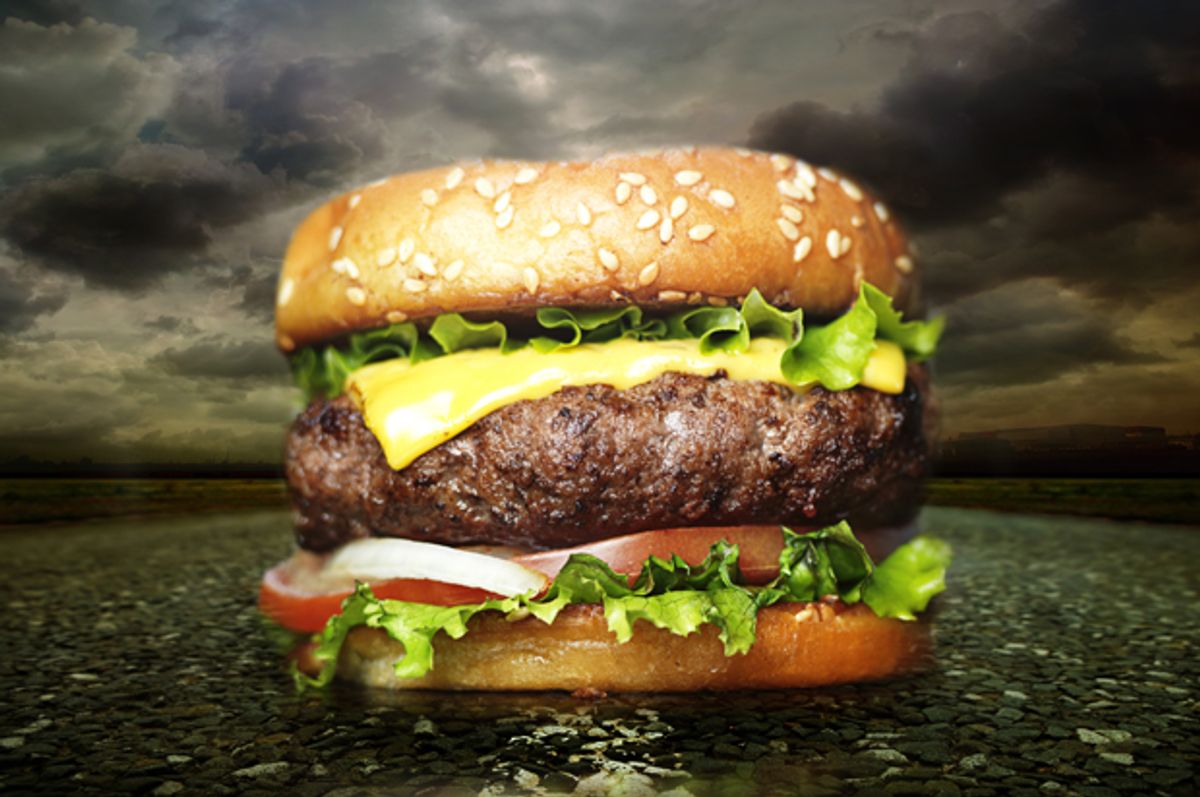 It was just over a year ago that the world’s first laboratory-grown hamburger was introduced to the world. The in-vitro meat (aka test tube meat, cultured meat, cruelty-free meat, and my favorite, “shmeat”) took four years to grow from cow stem cells and cost a meaty $332,000. Cultured in-vitro meat—or “frankenburger,” as the press dubbed it—is the brainchild of a Dutch biologist, Mark Post, of the University of Maastricht. The single burger, created from 20,000 strands of muscle tissue grown in petri dishes, got some lukewarm reviews.

“It wasn’t unpleasant,” Chicago food writer Josh Schonwald wrote. More enthusiastically, food researcher Hanni Rutzler commented, “That’s some intense flavor.” Because the meat was cultured from muscle with no fat cells, it lacked juiciness, and was reminiscent of an overdone dry turkey burger. Still, the consensus was that it tasted better than expected, had the consistency of real meat, and for a first try, was not discouraging. Post told NBC News, “I’m very excited. It took a long time to get this far. I think this is a very good start.”

While anyone who has seen videos of the horrific conditions factory-farmed cows, pigs and chickens endure in their short, tortured lives might agree that in-vitro meat is a good idea, there's an even more pressing reason to figure out a way to grow meat: the production of meat on planet Earth is killing us. It takes up more than half of our agricultural capacity, and as the economies of China and other developing nations grow, and as their citizens demand more meat on their dinner tables, that capacity will be strained even further.

Here are some of the more staggering statistics:

Already in the Gulf of Mexico, there is a dead zone the size of Massachusetts, the water so compromised that no fish can live in it. Combine this with the meat itself, often pumped full of antibiotics and hormones, not to mention potentially harmful bacteria due to the inadequate inspection protocol, and it all adds up to a catastrophe in the making.

Enter the in-vitro meat enthusiasts. A study at Oxford University demonstrated that the production of in-vitro meat is far more energy efficient than factory farming, and resulted in far fewer greenhouse gas emissions. Successfully growing meat would eliminate the enormous stresses factory farming puts on the environment, and it would meet the growing developing world's demand for meat.

While it is doubtful lab-grown meat could take the place of the real stuff at 300 grand a burger, that price could come down, drastically, as Mark Post and other scientists perfect the process and as a market begins to emerge for it. There is money behind the effort. Big money. Sergey Brin, the billionaire co-founder of Google, has largely funded the frankenburger initiative.

“He’s as determined as we are to make this happen,” Post told Time magazine. A year after the burger’s debut, Brin continues to fund the program, and Post’s team has grown. The goal is to produce meat indistinguishable from slaughterhouse meat. The color needs work as well as the taste and texture. The first burger was artificially colored (its natural color resembled chicken more than beef). Future lab burgers will be produced with a substance called myoglobin, the protein that makes red meat red. Scientists will grow fat tissues to make the burger juicier.

To bring the price down, they will need to grow the meat in a new medium. Currently it is grown in fetal bovine serum (FBS), which comes from unborn slaughterhouse calves. Aside from the animal welfare aspects of that fact, fetal bovine serum is extremely expensive. Various vegetable and yeast-based broths are being explored as alternatives.

Mark Post expects to come up with a viable lab burger within a couple years. At that point, he will hand off the project to people who will be responsible for expanding the operation, making it more widely available, even branding it. He has told the press that seven years is the target timeframe for the “frankenburger” to go mainstream. Well, not exactly mainstream. Don’t look for a McFrankenburger Happy Meal. Acceptance of cultured meat may take some time. Still, cultured meat products are not radically different from hot dogs or chicken nuggets, neither of which are exactly natural. Assuming it looks, feels and tastes like meat, the expectation is that environmentally conscious people will be the first to take up the cultured meat mantle, and as acceptance grows and demand increases, prices will hopefully plummet (a scenario currently being played out with electric cars).

Mark Post is not the only scientist working on cultured meat; another billionaire, Peter Thiel, founder of PayPal, has put his money behind a company called Modern Meadow, which is attempting to build a 3D printer that makes meat. Food companies are sniffing around the edges of in-vitro meat; they may smell money. Stay tuned.