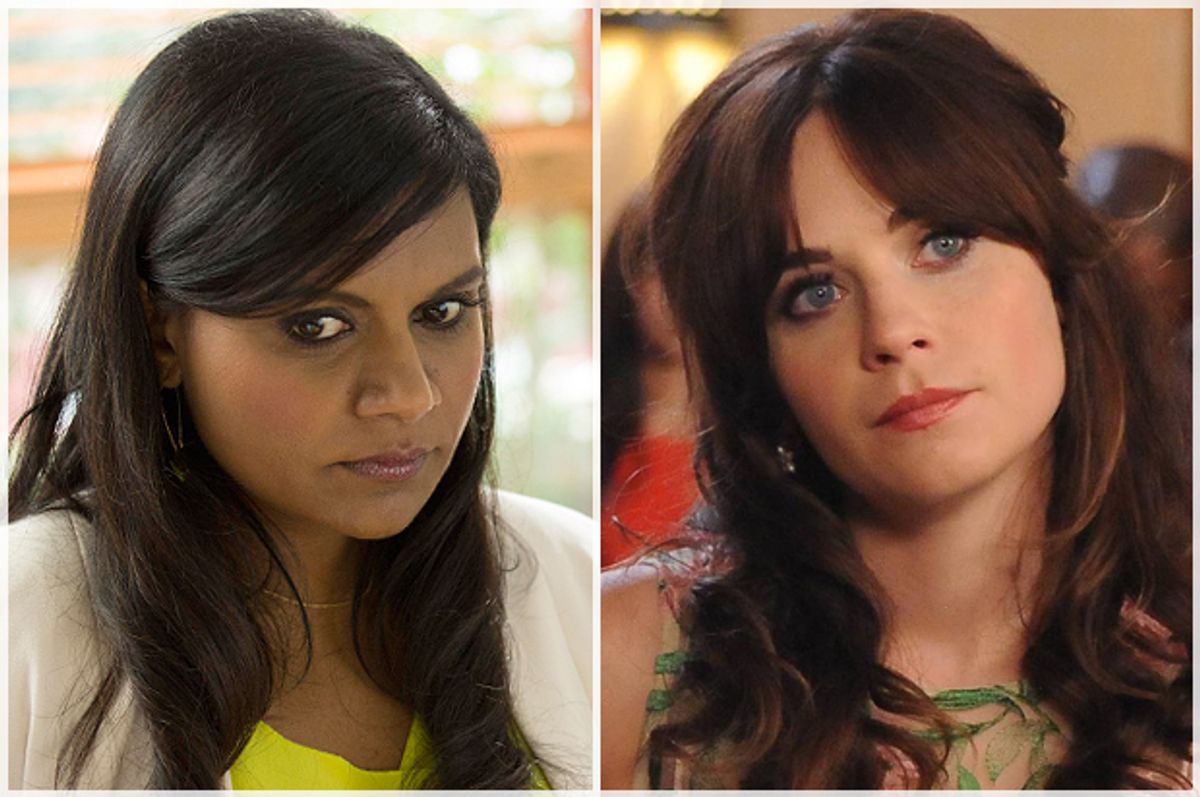 The fall television premiere season is an important time in American culture. I look forward to it with the same anticipation and anxiety with which a child might approach the first day of school, only it’s a lot better because it's not school. Last night kicked this season off in a big way with the premieres of both "New Girl" and "The Mindy Project" on Fox. Having spent the last four months watching crappy summer reality programming like "The Quest" and "Big Brother," I was more than ready to welcome these beloved, well-written shows back in my life.

And both started out strong. Zooey Deschanel and Mindy Kaling sparkled as leading ladies while wearing dresses that made me wish I made more money. Each supporting cast filled my life with smart dialogue and hysterical delivery. Zany situations, mild high jinx, Morgan, Schmidt.

Watching these shows back-to-back, though, I couldn’t help thinking about how Fox knew exactly what it was doing in airing them back-to-back. Both follow the lives of young female professionals with "quirky" personalities and a knack for awkward encounters and romantic entanglements.  Sure, Mindy is more of a workplace comedy. But whether it takes place in a loft in Los Angeles or a gynecological office in Manhattan, these are both fundamentally sitcom rom-coms.

And, to be honest, that’s what makes me nervous for their futures. Charming as the shows are, I worry that they may have already peaked a bit too early. Especially in the case of "New Girl," the relationship between Jess and Nick seems to have dwindled to a lackluster puddle of awkwardness. This is common among shows whose main love story resolves far too quickly. First they were roommates, then they were roommates/friends who fought a lot, and then midway through Season 2, they kissed! And: that kiss. That was seriously a good kiss, one of the best in TV history, or as Jess described it: “It was firm but tender. I saw through space and time for a moment, but that’s not the point.”

And that really isn’t the point because as much as I loved that kiss, it very well may have been the kiss of death. As a viewer, I would have been fine riding that Sam-and-Diane tension for much longer, a couple of seasons even. But nope. Instead of will-they-won’t-they, they just did. They got in a relationship, and it quickly got weird. The entirety of Season 3 focused on the flaws in their relationship, and by the end, they were broken up. The season premiere featured Nick encouraging Jess to have sex with the best man at a wedding, and it just felt ridiculous.

It is possible that "The Mindy Project" might be in for a similar fate. Near the end of last season, Mindy and co-worker Danny Castellano kissed unexpectedly, and in the final episode of Season 2, they officially began dating. From where I sit, this was another example of a totally premature romance. We barely had enough time to realize they were into each other before they sealed the deal, and now already in the premiere of Season 3, it is evident that they are in for a world of trouble. This episode was all about Danny keeping secrets from Mindy. The next one will probably be about some other vague misunderstanding, and on and on it will go, until they too will endure a painful breakup (I predict midseason, but perhaps that’s too pessimistic).

To avoid the discomfort of these broken relationships, both shows have amped up the antics of the supporting cast, and they have even added new characters to the roster. For a show so driven by cast chemistry, bringing in someone new can be a risky move, but if done correctly, it can effectively save the show. In the case of "The Mindy Project," Adam Pally was brought in on Season 2 as Peter Prentice, and what timing! The show needed the lovable bro-ishness of Peter to offset all of that romantic tension seeping from the Mindy-Danny story. They also brought on Tamra, a recurring character from Season 1 played by Xosha Roquemore, who also gets in some good one-liners here and there.

The risk did not pay off as well in the case of "New Girl." Last season saw the return of Coach, played by Damon Wayans Jr., an original cast member who disappeared suddenly after the pilot episode. His reentrance into the show has made things feel slightly crowded (literally so, considering all of these people are supposedly sleeping in one loft), and so far he just seems to merely fill the role of an arrogant, womanizing creep. I still hold out hope for him, though. Perhaps he has some deep, wonderful, humanizing flaw that will make him as lovable as the rest of the cast.

I’m not saying by any means that "The Mindy Project"and "New Girl" are on the decline. If last night’s premieres are any indication of what’s to come, we are in for a lot more smart comedy and shenanigans from both of these shows. I just think they could potentially have a lot to learn from each other. And as a young, quirky professional with a zest for life, I'm hoping these lessons are learned early enough so we can keep Mindy and Jess around for a long, long time.