How U2 became the most hated band in America

"All That You Can't Leave Behind" gave the group renewed relevance post-9/11. Now they're an Internet punchline 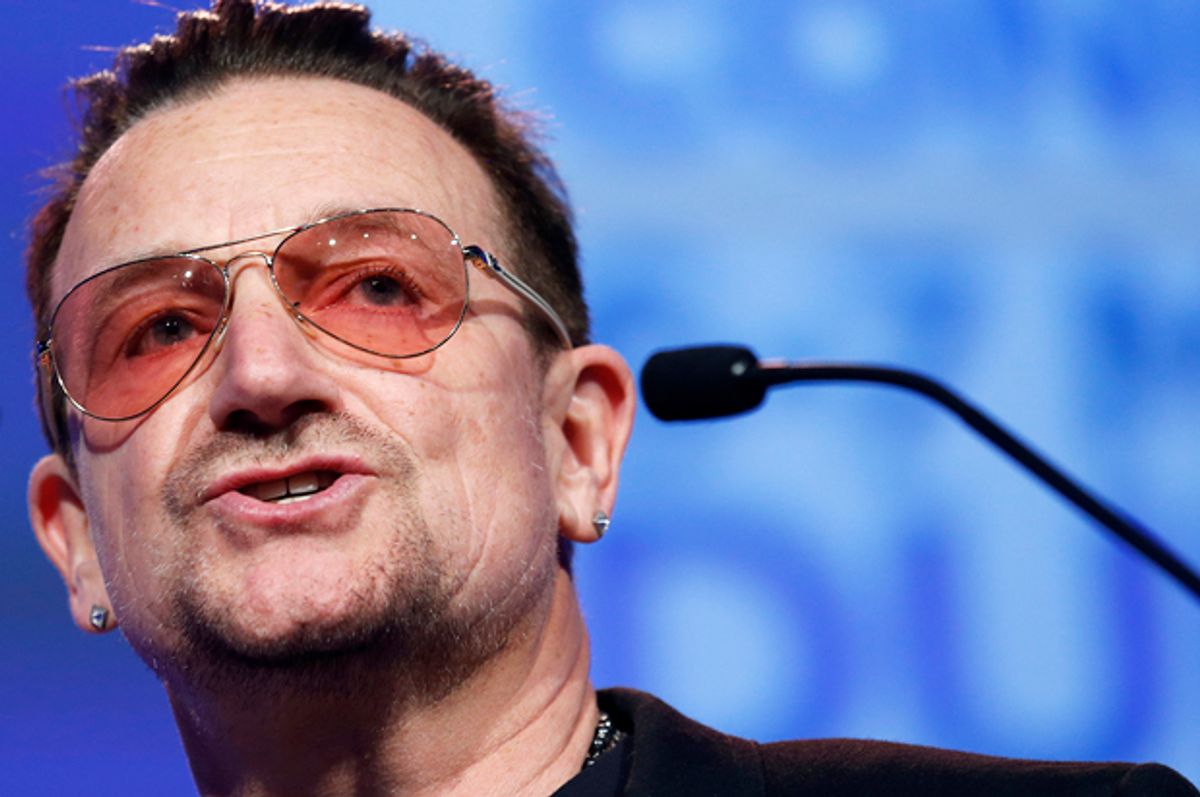 Last week, U2 broke the Internet, but not really in a good way. The Bono-led band’s Songs of Innocence, which U2 has hinted may be its last record, was released as part of Apple’s keynote event, dished out to iTunes subscribers for free. The album reportedly cost Apple $100 million, a figure the company is likely to eat. Rather than generating the kind of hype Apple is accustomed to, Songs of Innocencegenerated a huge Twitter backlash, with the company posting a guide on how to remove the album from your library on its support page. Most damningly, Wired’s Vijith Assar called the “devious giveaway” no better than “spam.”

This is quite a comedown for a band who, just over a decade ago, could still call itself the biggest band in the world. Their 2000 record, All That You Can’t Leave Behind, not only sold a staggering 12 million copies, but it gave the band a renewed relevance in the wake of 9/11, when songs like “Walk On” came to symbolize an America figuring out how to pick up the pieces. Songs like the anthemic “One” had always found a universal relevance, but this was a reminder of exactly why U2 was so popular: It united the types of people who would normally never agree on liking anything.

But in 2014, they seem to be disliked with the same intensity that they used to be patriotically beloved (despite their overt Irish heritage). The reason why depends on your perspective. According to a webpage helpfully titled “Why U2 Sucks,” the litany of reasons runs the gamut of “they are pretentious” to “they are derivative” and “they just plain suck.” The Guardian theorizes, however, that we hate U2 because we hate Bono, while the New York Observer thinks they’re the Guy Fieri of music, which one assumes means selling bombastic, tacky crap to as wide an audience as possible.

Hating U2 is something of a modern Rorschach test, and more than anything, it’s the same brand management issue that befalls just about any band that aspires to be the biggest in the world. The moment a group aims to be the one act everyone likes, they become the one “no one likes,” or at least the one the Internet most likes to dogpile on. In a roundup of songs that broke their respective bands, CBC rounds up all the usual suspects of wildly popular bands a bunch of people now hate for their own ink-blob reasons: Coldplay, Mumford and Sons, Dave Matthews Band, and Weezer.

Each of these groups started their careers either well-liked or beloved (especially in the case of Weezer), only to find themselves a punchline among the kinds of folks who want to differentiate their music taste from the rest of the pack. Coldplay is, even among its most fervent detractors, far from the worst by any measure, but there’s a performative aspect to disliking them, one that says more about you as a consumer than the band itself. Most people who hate Nickelback, widely considered the most hated band in music, can’t even name a single Nickelback song.

Although CBC cites “Discotheque” (from Pop, U2’s much-derided experiment in excess) as the moment the public turned on them, it was most likely Apple that did U2 in. The wide success of 1991’s Achtung Baby launched a decade-long experiment by the band into art rock, as Bono attempted to bring the avant garde into the mainstream. Although 1993’s Zooropa won the Grammy for Best Alternative Album, Bono never wanted U2 to be an "alternative" (read: niche) group, your vinyl-hoarding friend’s favorite band. They wanted to be everyone’s favorite band, which is one of the many reasons Pop was such a disaster; the band was so busy putting together the tour for the record, a comment on their global influence as much as it was its intended statement on the state of capitalism, that they were rushed into completing a record they didn’t like. It was an artist statement in search of an album.

Pop was, indeed, an album of excess, but it least had ambition. Their aforementioned follow-up record, All That You Can’t Leave Behind, settled for a more radio-friendly, mainstream sound, teaching the band the wrong lessons: The secret to success is to force everyone to like you. They mistook ubiquity for acclaim. When How to Dismantle an Atomic Bomb came out, it featured more of the mom rock that made its predecessor a success, along with an iPod commercial that put Bono singing “Vertigo” on every screen in America. For a band who was so keen to bite corporate America’s hand just seven years prior, it looked suspiciously like selling out.

As someone who likes many U2 records and dislikes many others, their recent output isn’t so much an issue of selling your soul to the man as much as deciding to be a certain type of band, one that might not please the Achtung Baby faithful. If you liked the kind of music they were making with “Stuck in a Moment You Can’t Get Out Of,” you might like No Line on the Horizon, a 2009 album filled with middle-brow jams. This was a time when even their politics seemed repackaged to fit their new global mindset. Instead of their signature songs about Irish pride, Bono wrote hippy-dippy lyrics about world peace that could play while you browse the aisles at Hobby Lobby.

That shift particularly affected the public perception of Bono. As theGuardian notes, the singer often comes off as “holier than thou” to his detractors, “rich beyond his wildest dreams and hanging out with princes, presidents and preachers [but one who] nonetheless won’t shut up about poor people.” For some, he’s less the musical poet who wrote “One” than a celebrity blowhard who wants to browbeat them into caring, like Susan Sarandon or Sean Penn. There’s a general mistrust around celebrity activism, and when you throw in Bono’s penchant for religious imagery, it reeks of Kanye West.

However, the band’s over-the-top tendencies aren’t a new criticism. According to Yahoo’s Chris Willman, the band nearly jumped the shark back in 1988 with the release of Rattle and Hum, a blues-infused record that paid tribute to many of the band’s influences, from Elvis Presley to B.B. King, a tribute to their influences that represented a seemingly “back to roots move.” “But there seemed to be more hubris than humility in the footage of their arena shows,” Willman argues. “And the massive roll-out for both album and film didn't shout ‘back to basics.’ With that mixed a message being sent out, was it any wonder that the reaction was also all over the place?”

Oddly enough, the band’s brand image had already been carved out by this point; Anton Corbijn’s “stony-faced” black-and-white imagery for The Joshua Tree became iconically associated with everything fans both loved and hated about the group. The difference is, though, that in 1988, their careers had time to recover through albums that did the necessary damage control; Achtung Baby is so undeniably, earth-shatteringly great that even the biggest Bono haters had to admit that the man knew what he was doing onstage. After a decade of releasing middling commercial jingles, it’s hard to make the same rationalization, or even what made U2 good to begin with.

This is a struggle that all aging bands face, where what was once cool starts to lose its luster as those who used to play your favorite songs start to wither before you, as in the case of Aerosmith or REO Speedwagon, the latter relegated to state fairs. You might be seeing The Rolling Stones at your local stadium, but you’re not going for the thrill of watching Mick Jagger in 2014. You’re going for a reminder of the performer he was in 1965, when “(I Can’t Get No) Satisfaction” brought together people who might not even call themselves rock music fans.

U2 might have thought they were getting in on the surprise album bandwagon, as everyone from Beyoncé to Skrillex is doing it, but the biggest surprise is how little it mattered. Bono has spent the last three and a half decades trying to get everyone to like him, but the greatest PR coup he could ever pull is to finally stop caring.