When will the NFL deactivate Roger Goodell?

The NFL is now getting "tough" on abusive players. But the trouble in the league starts at the very top 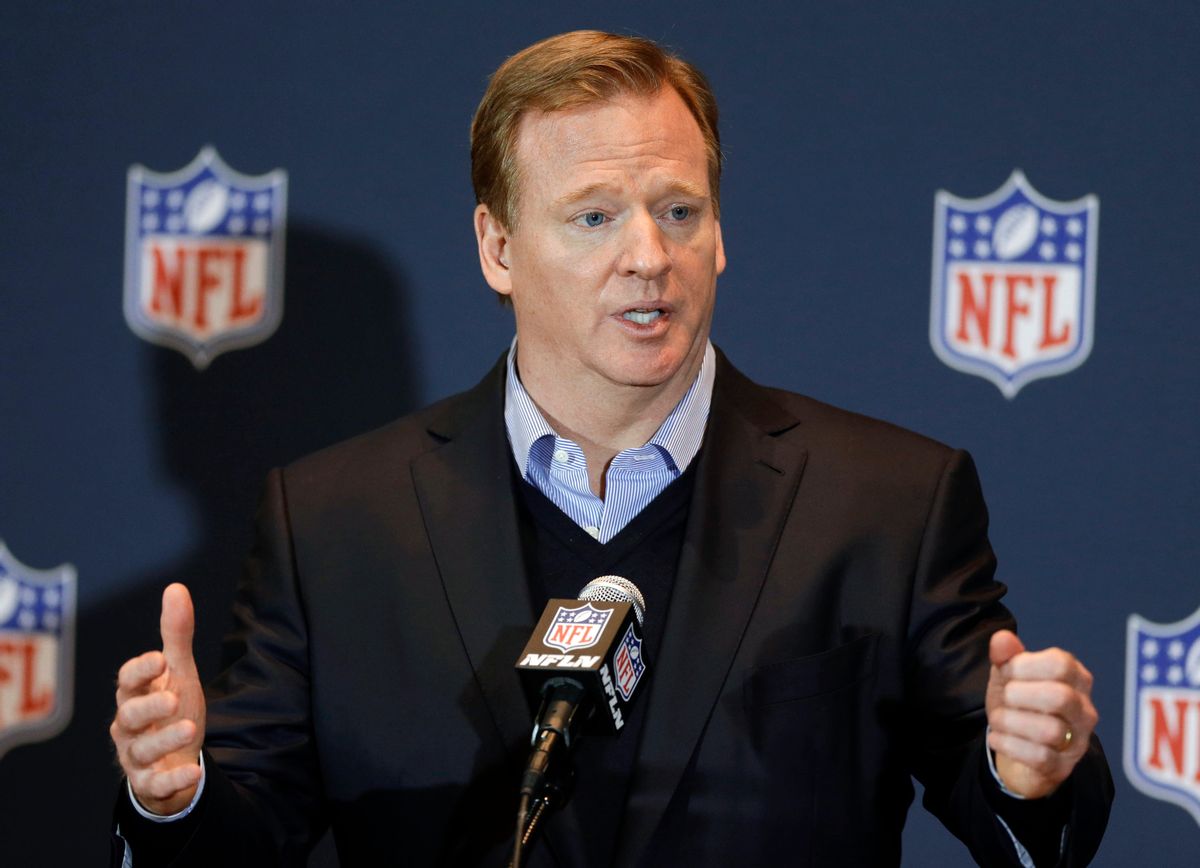 The Arizona Cardinals have deactivated running back Jonathan Dwyer after he was arrested this week for aggravated assault. According to a report on the July incident from the Phoenix New Times, Dwyer is alleged to have head-butted his wife, fracturing her nose. He then threatened to commit suicide if she called the police. He is also alleged to have punched his wife in the face, and hurled a shoe that hit his 18-month-old son in the stomach. He stands charged with aggravated assault causing a fracture, one count of aggravated assault involving a minor and two counts of criminal damage.

"Given the serious nature of the allegations we have taken the immediate step to deactivate Jonathan from all team activities," the team said in a statement. "We will continue to closely monitor this as it develops and evaluate additional information as it becomes available."

This is just the latest in the NFL's newly adopted punitive posture when it comes to handling domestic violence among its players. Last week, the Baltimore Ravens dropped running back Ray Rice. (Rice is appealing his indefinite suspension from the league.) And this week, the Minnesota Vikings deactivated -- after deactivating and reactivating -- running back Adrian Peterson while the Carolina Panthers dropped defensive end Greg Hardy from the active roster, pending Hardy's appeal of a domestic violence conviction. Each time, there was some murmur from leadership -- team owners and coaches -- about not getting it quite right.

But while taking a stronger position against players who are abusive is a step the NFL should have taken a long time ago (though the question remains of what, if any, role the NFL is playing in providing access to preventative education and batterers' intervention programs for players benched as a result of abusive behavior), publicity around the deactivated players gives the false impression that the NFL's problem is isolated to a few abusive players. But the reality is that the rot starts at the very top, and has been festering for a very long time.

Which leads to the question at hand: When will NFL commissioner Roger Goodell step down?

Goodell doesn't care about violence against women or the health of his players, but this also doesn't matter to the owners. He's been good at making them lots and lots of money. But the single thing Goodell has been able to reliably deliver on -- profits -- may be compromised by his flailing (and, according to recent reports, outright hiding) in response to mounting criticism. Corporate sponsors are getting queasy, fans are angry and -- as the Nation's Dave Zirin recently pointed out -- this may be enough to make the owners blink on Goodell's tenure. And the investigation into what Goodell knew and when could force their hands. “If the investigation concludes that the commissioner saw more and knew more than he has said and he was not truthful about that to the clubs, things would change,” one team official told the Washington Post.

Critiques of Goodell aren't new, and they aren't isolated to feminists and anti-domestic violence advocates calling for him to step down. In 2010, Grantland editor-in-chief Bill Simmons had this to say about Goodell's bottom line:

Maybe I’m in the minority, but I think Goodell is a total hypocrite for pretending to care about the welfare of his players as he’s pushing for an 18-game regular season that would lead to more injuries, more concussions, more collateral damage, more everything. Hey, Roger: If you cared about the welfare of the players, you’d shorten the season to 15 games and add another week of byes. Right? But hey, that would cost owners money.

A recent scare among sponsors could cost owners money, too. Goodell has, in NFL parlance, become a "distraction." And we know how the NFL feels about distractions.