Roger Goodell must go: Why today's press conference is too little, too late

In a rambling, self-indulgent press conference the NFL commissioner shows he still doesn’t get what he did wrong 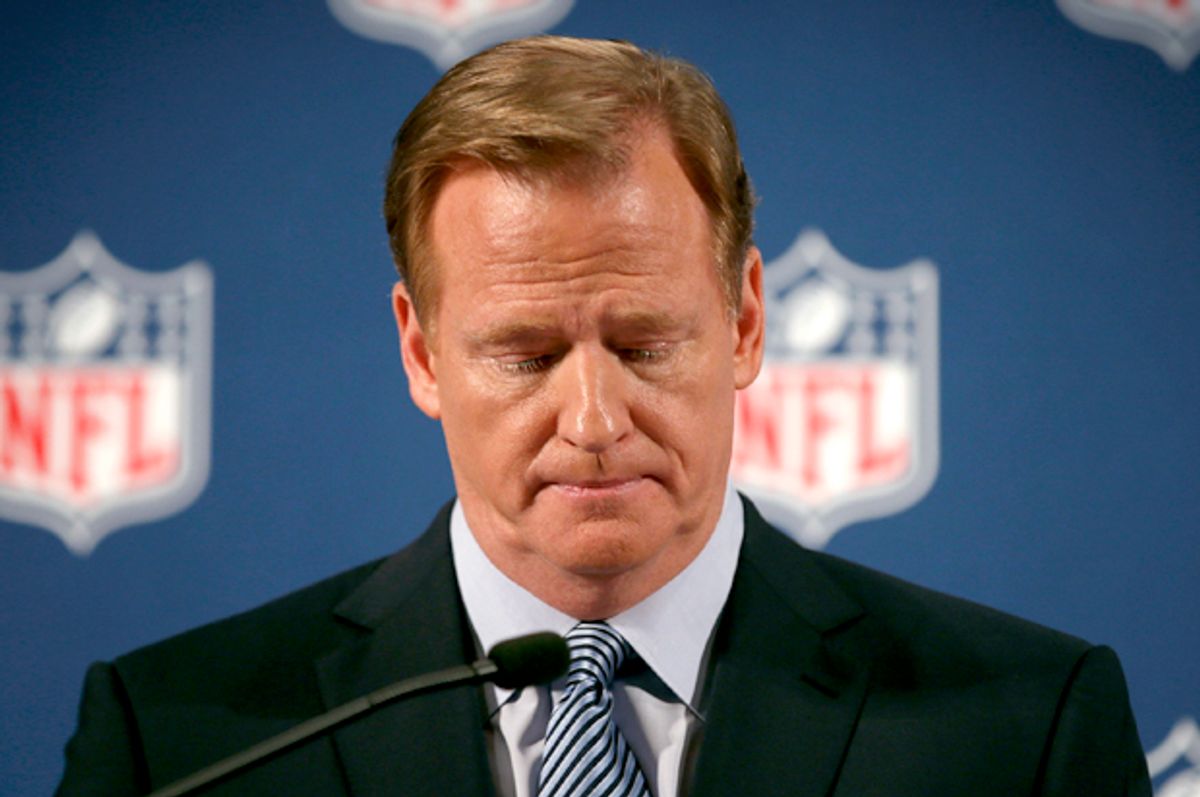 NFL Commissioner Roger Goodell came out of hiding Friday, almost two weeks after TMZ released a video showing Ray Rice brutalizing his fiancé that rocked the league permanently, with a bizarre, defensive press conference. “I got it wrong in the handling of the Ray Rice matter, I’m sorry about that,” he announced early. "But now I will get it right.”

But Goodell went on to essentially say he made all the right moves in August, when a public backlash to Rice’s two-game suspension resulted in new penalties for domestic violence offenses and a new program of league-wide player education on sexual assault and domestic violence. He pledged to expand those programs with new “expertise” and to donate money to two groups who work with abused women.

In a particularly tone-deaf moment, Goodell promised the process would be complete in time for the Super Bowl. Woo-hoo! Pass the nachos.

He never once mentioned any of the women his players assaulted.

It’s way too little, too late: Goodell has to go.

Contrast Goodell’s performance with that of NBA Commissioner Adam Silver after basketball faced the spectacle of Los Angeles Clippers owner Donald Sterling disparaging his black players and ordering “girlfriend” V. Stiviano not to consort with African Americans – not even with former NBA great and Los Angeles Dodgers co-owner Magic Johnson or the team’s Matt Kemp, even after she sweetly reasoned that Kemp is half white. (Now there was a sports scandal you could savor. A little.) That news broke on the weekend, and by Tuesday afternoon Silver had imposed the toughest fine possible and promised that the owners would force Sterling to sell the team.

Goodell, by contrast, took 10 days to face the public. He waited until 3 PM ET on a Friday, the traditional time for a news dump. And even though he said he got the Ray Rice situation “wrong,” he spent most of his press conference explaining how he basically got it right when he toughened penalties for domestic violence in August.

Both Silver and Goodell faced social problems bigger than the sports they represent: persistent racism, in the Sterling mess, and a belief that women are property, in the case of Rice. Silver stepped up quickly, Goodell stumbled, and he continues to stumble.

I’m a fan of the Tumblr “You had one job” and I’ve thought about it repeatedly since the Rice video broke and Goodell proved himself useless. He likes to bluster about his tough standards with his players, to say “My only responsibility is to protect the integrity of the Shield” and by his own standards, he’s failed miserably. Polls now show 57 percent of NFL fans disapprove of the way the league handles domestic violence.

Asked if he had considered resigning during the scandal, Goodell answered flatly, "I have not." The son of a U.S. senator will keep earning his $44 million salary and believing he deserves every penny of it. Meritocracy in action, folks.