Scotland’s referendum, 700 years in the making: Why the "no" vote was still a stunning watershed 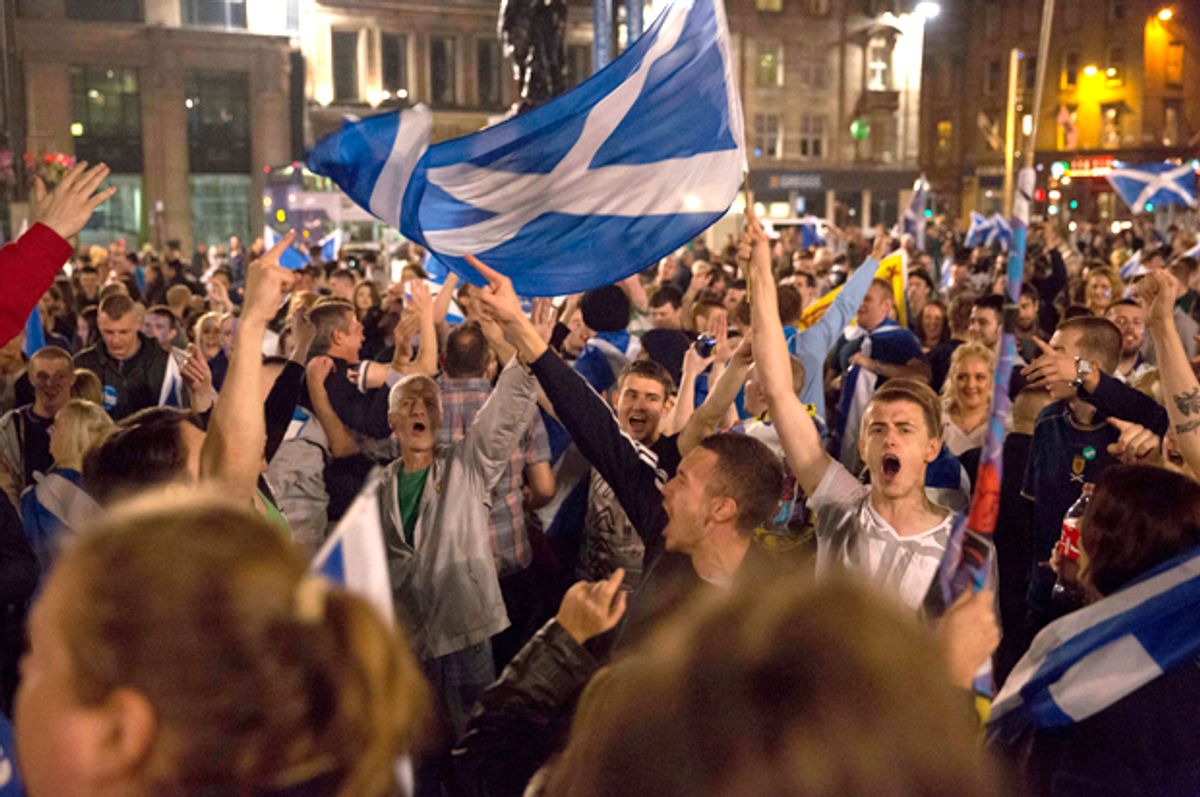 There are few things in life as annoying as the punditocracy. The “too-close-to-call” frenzy that preceded yesterday’s referendum on Scotland’s future driven essentially by a single poll 12 days earlier that showed the yes vote in the lead for the first time was bad enough. But the morning-after commentary from London — that Scotland had decisively rejected independence, with the strong insinuation that those volatile Scots had finally come to their senses — may be worse. Despite the fact that independence was rejected by a full 10 percent, nothing could more completely miss the point. This referendum, despite its eventual outcome, was a stunning watershed in Scottish history, one that can only be fully understood against the backdrop of centuries of nationalist sentiment.

As the vote approached, I kept thinking of my grandmother. When my father introduced her to his bride-to-be, she swore she would never forgive him for taking up with a foreigner. He was Scottish, she was English. The 15 years my mother subsequently spent in Scotland were pure misery. The more polite neighbors simply gave her the cold shoulder. The less polite muttered under their breath about the “bloody Sassenachs.”

My grandmother took great pride in her Scottish identity. But the idea that the Scottish National Party, which 50 years ago was a tiny fringe element without a single parliamentary representative, would one day persuade 45 percent of Scots to vote for secession, with perhaps another 10 percent deeply ambivalent, would have been as unthinkable to her as the idea of putting a man on Mars.

The roots of this nationalist sentiment go back to medieval times. For those of us who grew up in Scotland, nationalism was bred in the bone, built layer by layer over seven centuries, with each new phase of history adding its own flavor. Our history lessons had their own teaching materials and their own curricula, just as Scotland had its own church and its own legal system. As kids, we didn’t learn about the Battle of Hastings in 1066; we learned about the heroic victories over English armies by William Wallace at Stirling Bridge in 1297 and Robert the Bruce at Bannockburn in 1314.

Moving ahead through the centuries, we didn’t study the English Civil War of 1642-1651, but the 1707 Act of Union, when Scotland was “bought and sold for English gold,” in the words of our national poet, Robert Burns (whom we studied in preference to Keats and Wordsworth). From that we moved on to the crushing of the Jacobite rebellion at Culloden in 1746, where 2,000 Scots died in an hour, followed by the brutal crackdown on dissent by the Duke of Cumberland, aka “the Butcher.”

We didn’t learn about Gladstone and Disraeli and William Pitt but about David Hume and Adam Smith, “who described compassion as the basis of economics,” in the words of Rajiv Joshi, former chairman of the Scottish Youth Parliament (his name and position alone speak volumes about the character of modern Scotland).

In the decades since the Second World War, at least three new layers were added to this bedrock of history. From the 1940s to the 1960s, it was the surge of militant working-class socialism, based in the coalfields and the shipyards. Then, as heavy industry entered its long decline, so did the Conservative Party (formerly known as the Scottish Unionists). It began with the election of Sir Alec Douglas Home as prime minister in 1963. Many Scots came to see him — Mayfair-born, Eton- and Oxford-educated, and speaking a BBC English that verged on self-parody — as the embodiment of a party of rural landowners and upper-class twits.

And then came an even more significant turning point: the election in 1979 of Margaret Thatcher, whom the Scottish National Party leader Alex Salmond recently described as the “handmaiden” of independence. I was living in London by that time, but my work often took me north of the border, where I found that the old disdain for the upper-class twits had morphed into a snarling anger at Thatcher’s efforts to destroy the labor unions and her manifest contempt for the poor. (The homeless, she once famously said, “are casting their problems on society, and who is society? There is no such thing.”) In Scotland, the Iron Lady will always be best remembered for quotes like that and for her proposed “poll tax,” which would have levied a fixed tax on every adult resident, regardless of income.

Three postwar turning points, then. And now we have the fourth, and it’s the most significant of all.

Several things are striking about how the vote finally broke. Interviews with voters as they left the polling stations (no formal exit polls were allowed) revealed a remarkable degree of ambivalence, with many saying that their intentions had swung back and forth between yes and no right up to the last minute before finally tipping into the no column.

The fervor of the yes voters and the indecision of the swing voters who finally opted for no had a great deal to do with the frantic last-minute warnings, threats and emotional appeals by Prime Minister David Cameron and other politicians from London. Secession would have dire consequences, Cameron warned. What would the new currency be — because it certainly wouldn’t be the pound? What would happen to pensions and mortgages underwritten by English banks? How many investors would flee the country? What if a Scottish bank were in trouble and couldn’t rely on the vast reserves of the Bank of England to bail it out? What would happen when revenues from North Sea oil declined?

And then, Cameron said, there was the matter of national pride. Didn’t we band together to win two world wars? What would happen to Britain’s nuclear deterrent, which is housed in Scottish submarine bases? And look at this marvelous union we have built over four centuries: How can we throw that away?

To the nationalists, all this was a red flag to a bull. Nuclear weapons? Get the damn things out of here. North Sea oil revenues? Our concern, not yours. Marvelous union? We didn’t build it; you did. For yes voters, the whole episode was yet another example of English bullying, of treating the Scots like subordinate children, incapable of making their own decisions.

As for the waverers, there’s no doubt that a good number were scared into voting no by Cameron’s dark warnings of the economic risks of secession. But much more significant is the number who were swayed by the package of concessions that the prime minister was forced to offer as part of his desperate effort to keep the U.K. intact, giving Scotland much more authority to set its own policies on taxation, public spending and social welfare. So this was something much more subtle than just a crude yes/no split. While Scotland clearly rejected outright secession, it demanded, and will now gain, a much greater degree of autonomy. Cameron’s promises of devolving new powers to Scotland were so explicit that he is now bound to honor them, and he has said as much.

But the real key to understanding what happened yesterday is how the vote broke down by age and geography. Only two of Scotland’s 32 council districts voted yes, but one of them was Glasgow, by far the biggest city, and the other was Dundee, the fourth-largest (and coincidentally my grandmother’s hometown). The core of the no vote was older and rural. Voters over 65 favored staying in the U.K. by an overwhelming 73 to 27 percent. But younger voters were radically different. Fifty-nine percent of those between 25 and 34 said yes. In the 35 to 44 age band, 53 percent voted for independence.

These people are Scotland’s next generation of leaders. For them, nationalism is no longer about kilts and bagpipes and haggis (though whiskey doesn’t seem to have lost its popularity). This generation is liberal, green, edgy, cosmopolitan. Its coming of age coincides with the emergence of Glasgow and Edinburgh as distinctive, internationally renowned cultural centers. Young adults and those approaching middle age have grown up with a strong sense of European identity, one big reason being the devolution of power away from Westminster that has already occurred, rooted in the rebellion against Thatcherism and the collapse of the Tory vote in Scotland. Since its creation in 1999, the Scottish Parliament has been vigorously internationalist, strengthening its commitment to a Scandinavian-style social safety net and pushing the EU to set more ambitious goals for a transition to renewable energy. Now it will have control over taxes, expenditures and social policies as well.

So the fat lady did not really sing in Scotland yesterday. David Cameron said last night that the matter was now settled for a generation. But in the context of 700 years of history, a generation is nothing. More significant is what the SNP leader, Alex Salmond, said in conceding defeat: “Let us not dwell on the distance we have fallen short, let us dwell on the distance we have traveled.” And I have a feeling my grandmother would have agreed.