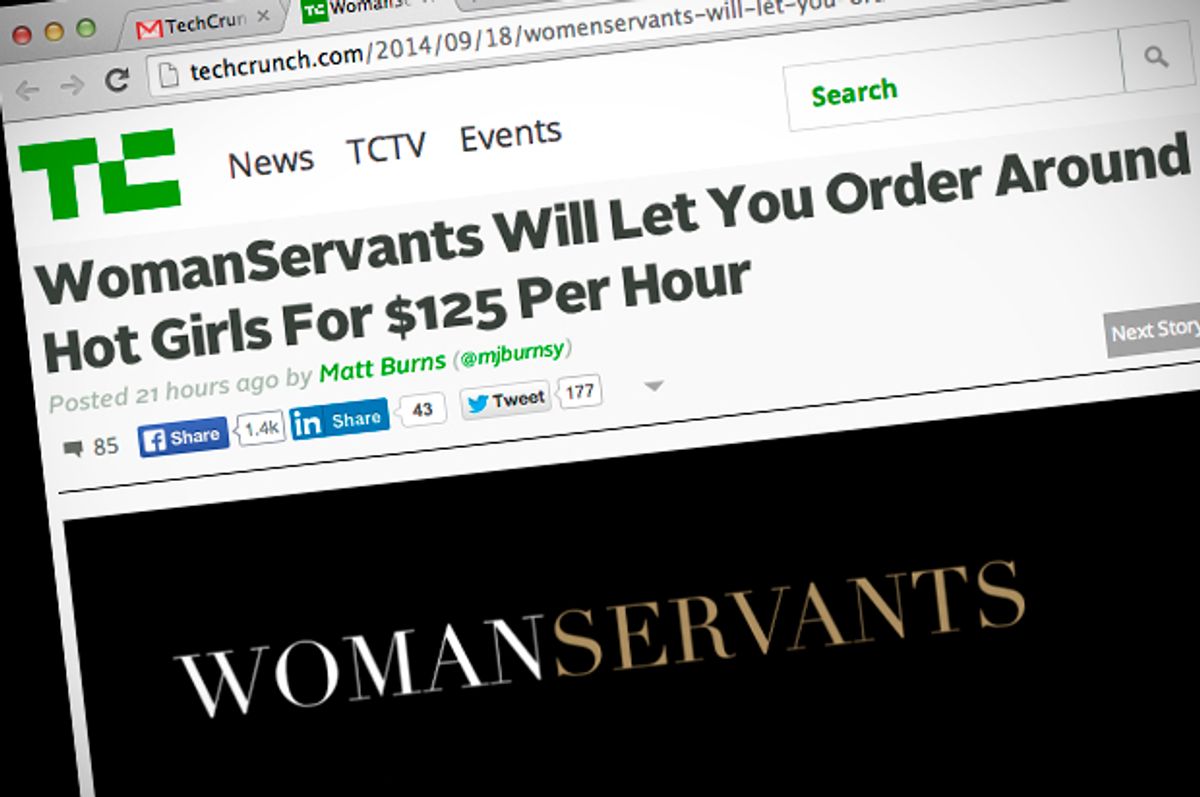 We already knew TechCrunch engaged in plenty of casual sexism. We just didn't know that that casual sexism could border more on Men's Rights activism. On Thursday, the site published a confused "parody" post regarding a new Silicon Valley-based startup, ManServants, which allows people to rent -- you guessed it! -- male servants to do their bidding for $125. Let's start by saying this: ManServants is sexist -- but not for the reasons TechCrunch offers. The reasons TechCrunch offers are bad. The reasons ManServants is actually sexist are also bad, but we'll get to those in a bit.

TechCrunch first covered the startup in a straightforward profile of the company on Wednesday, in which writer Sarah Buhr interviewed one of ManServants' cofounders while taking advantage of the service. Seeing the coverage and ManServants itself as problematic, TechCrunch senior editor Matt Burns then stepped in and decided to show everyone how sexist this sexist concept is, by replacing all gendered references in the original article with female pronouns -- swapping "man" for "woman," "he" for "she," so on and so forth. And thus it should have been clear to everyone that ManServants is a sexist concept.

But wait -- in case someone confused what was going on, Burns offered an editor's note to explain his plan to unmask all this problematic male oppression, which is where things got tricky:

Editor’s Note: Yesterday, we ran a story about a new startup called ManServants, which facilitates the rental of “hot men” for $125. As most of the commenters note, the service is incredibly sexist and has no place in a society striving for gender equality.

To examine my thoughts towards the service I took the original post and swapped every instance of a gendered noun. “Man” became “woman.” “Guy” became “girl.” “ManServants” became “WomanServants.” Names were changed. And the entire story become obviously sexist and obscene. Why is it okay one way and not the other? Well, it’s not. Man or woman, we all have a right to be treated as subjects, not objects.

Here's a not funny fact: Women have faced and still face systemic oppression. Institutional sexism is a real thing -- and, as Valleywag points out, is an especially real thing in the tech industry. The persistence of discrimination against women is partly due to the industry's failure (or, on a larger scale, society's failure) to recognize what sexism actually looks like; TechCrunch has illustrated the confusion ever so adroitly.

Yes, ManServants is sexist, and yes, Burns is even right to say that it isn't conducive to achieving gender equality -- because it relies on stereotypes of both genders and tries to turn sexism into some sort of $125 per hour joke. In one of the company's short promotional videos, which explains that the idea for ManServants was borne of futile attempts to make women enjoy male strippers, it's immediately clear that the cofounders are utilizing some very dated conceptions of "what women want" to reinforce the idea that the only way to get equal is to get even. Here's the clip:

The characterization of women ManServants uses is fundamentally flawed and sexist on its own; ignoring that in favor of decrying the types of historical objectification women have experienced -- but only when applied to men! -- misses the point. It also proposes a dangerous and misguided understanding of oppression that overlooks systemic discrimination against women, and which allows for that discrimination to perpetuate itself. So, congratulations, TechCrunch: You've outdone yourself by preaching to the MRA subreddits of the world. Kudos for standing up against all that sexism.