The science of slipping on a banana peel, and other hilarious studies win big at Ig Nobels

Because sometimes science makes us laugh 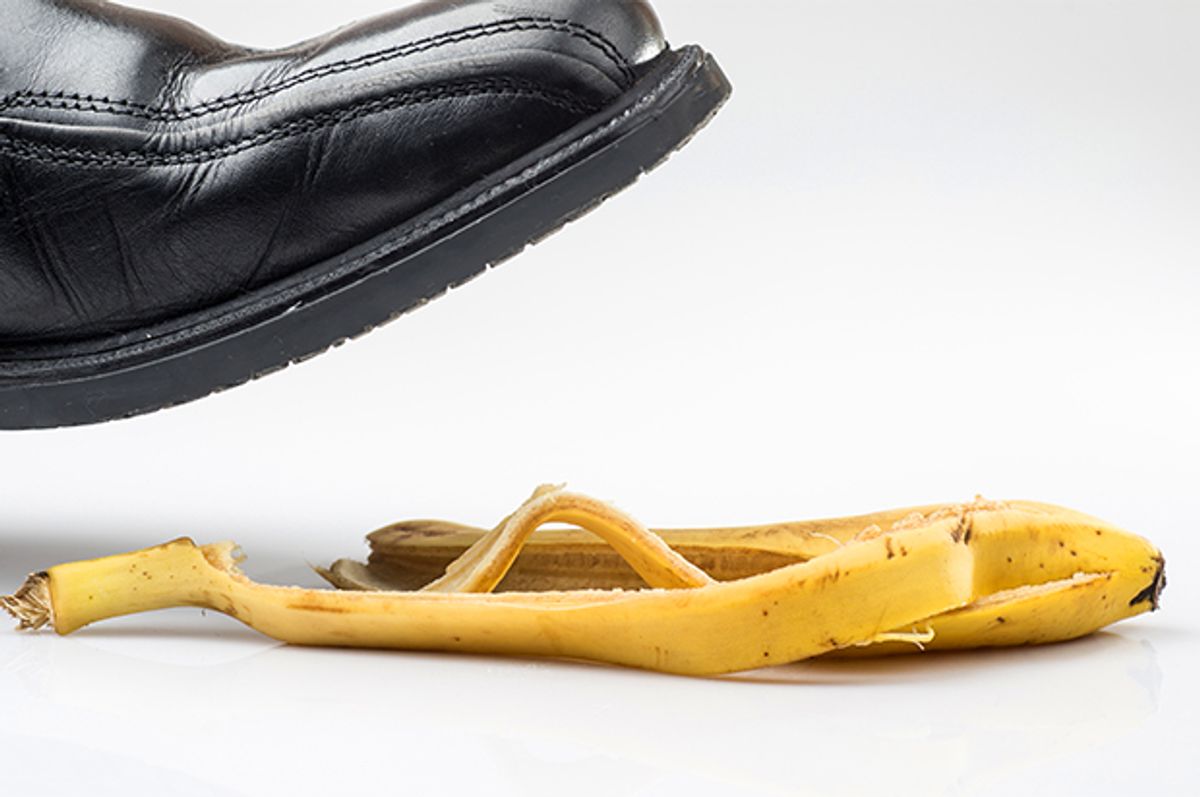 One of Thursday night's big winners, at the Ig Nobel Prize ceremony, was a study on the science of slipping on a banana peel. Specifically the friction between your shoe and the peel, and the peel and the floor. (Charlie Chaplin would be proud.)

The study, conducted by researchers at Kitasato University in Japan, was done in all seriousness, and the conclusions have real world implications on the building of prosthetic joints. However, it is hard not to see how studying this classic comedy gag would not wedge it perfectly within the humorous parameters of this peculiar and well-known science award.

"Research that makes people LAUGH and then THINK," that is the guiding principle of the Ig Nobel Prizes, an annual awards ceremony that honors imaginative, if not amusing, scientific research.

The awards were handed out at the 24th First Annual Ig Nobel Prize ceremony, held at Harvard, by the magazine Annals of Improbable Research.

The Ig Nobels may have nothing to do with the actual Nobel Prize, but they are handed out by Nobel laureates, including Carol Greider, who won in 2009 for medicine, Eric Maskin a 2007 winner in the field of economics and at least four others.

The theme this year was food, and naturally, the winner in the neuroscience category was research on understanding "what happens in the brains of people who see the face of Jesus in a piece of toast."

This research might make you chuckle at first, but in actuality the team from China and Canada, were examining an established occurrence known as pareidolia, which Live Science describes as, "a type of apophenia, which is a more generalized term for seeing patterns in random data."

In the category of public health, researchers from Czech Republic, Japan, the USA and India, delved into the mental hazards of owning a cat. (This will not deter me, however, from getting a kitten.) One study, by David Hanauer, Naren Ramakrishnan and Lisa Seyfried delved into the potential casual link between humans owning cats and depression.

If you missed the awards ceremony, it can be watched via the livestream video below:

And courtesy of BBC, here is a full list of the winners:

NEUROSCIENCE: Kang Lee, of the University of Toronto, Canada, and colleagues for trying to understand what happens in the brains of people who see the face of Jesus in a piece of toast.

PUBLIC HEALTH: Jaroslav Flegr, of Charles University, Czech Republic, and colleagues for investigating whether it is mentally hazardous for a human being to own a cat.

BIOLOGY: Vlastimil Hart, of the Czech University of Life Sciences, and colleagues for carefully documenting that when dogs defecate and urinate, they prefer to align their body axis with Earth's north-south geomagnetic field lines.

ART: Marina de Tommaso, of the University of Bari, Italy, and colleagues for measuring the relative pain people suffer while looking at an ugly painting, rather than a pretty painting, while being shot [in the hand] by a powerful laser beam.

ECONOMICS: The Italian government's National Institute of Statistics, for proudly taking the lead in fulfilling the European Union mandate for each country to increase the official size of its national economy by including revenues from prostitution, illegal drug sales, smuggling, and all other unlawful financial transactions between willing participants.

MEDICINE: Ian Humphreys, of Michigan State University, US, and colleagues, for treating "uncontrollable" nosebleeds, using the method of nasal-packing-with-strips-of-cured-pork.

ARCTIC SCIENCE: Eigil Reimers, of the University of Oslo, Norway, and colleagues, for testing how reindeer react to seeing humans who are disguised as polar bears.