Ultimate guide to saving the world: What we need to do (and do right now)

As thousands prepare to descend on New York for the largest ever climate march, we must consider our options 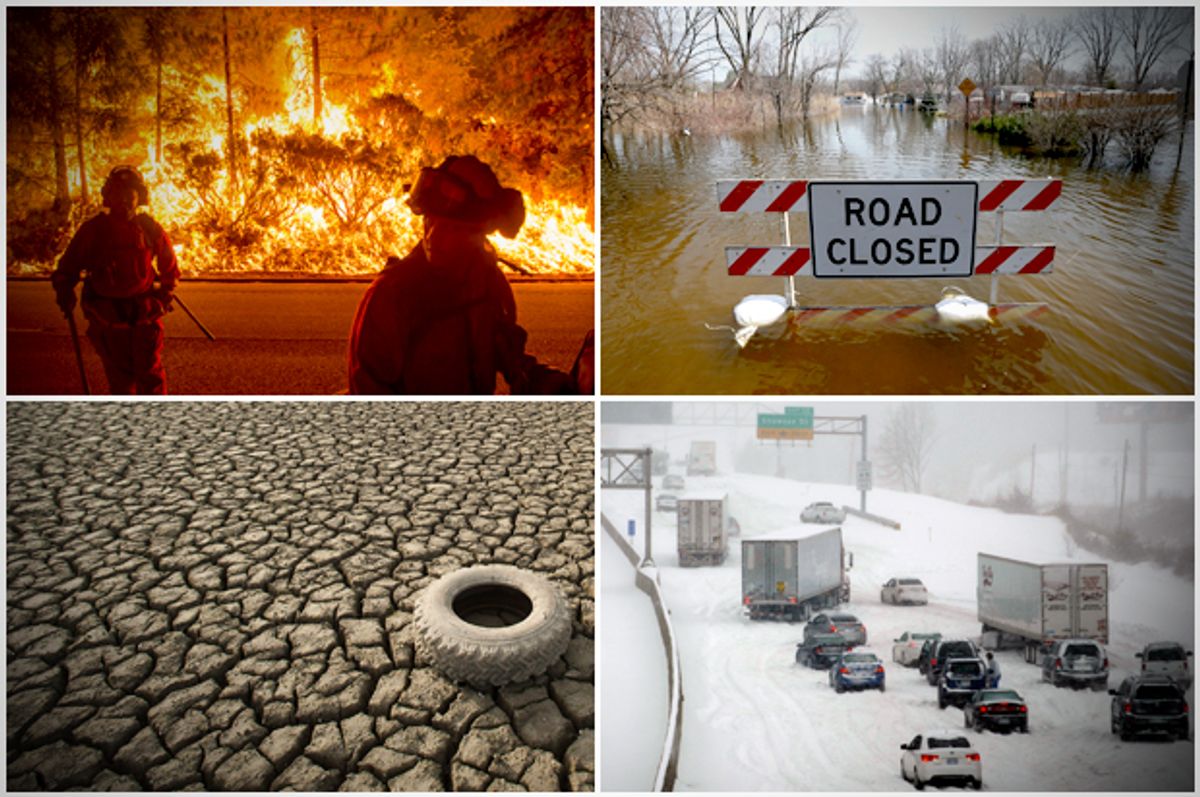 There's going to be a big climate march on Sunday, in case you haven't heard. The biggest climate march ever, in fact, if it lives up to its organizers' promise. We're talking about the kind of march that comes with its own hour-long trailer, the kind of march that will include labor unions, social justice organizations and groups representing frontline communities, not to mention U.N. General Secretary Ban Ki-moon -- even though, as the Guardian points out, "high-ranking officials do not normally attend mass public protests."

"It's not your mother's climate march," promises Paul Getsos, the national coordinator for 350.org, particularly not if your mother is white and middle-class. Instead, he told Salon, organizers are working toward building "the most diverse, multi-issued, broad-based march or action on climate that’s ever happened." And it's all leading up to global negotiations that, if things somehow go extremely well, could help get the world on track to avert catastrophic climate change.

"This is dead-serious business," wrote climate activist and 350.org founder Bill McKibben in his initial "call to arms" back in May, "a signal moment in the gathering fight of human beings to do something about global warming before it's too late to do anything but watch."

In other words, there's been a lot of hype. Enough to make one nervous. (And certainly enough to already be pissing off conservative commenters.) The challenges ahead, after all, are so daunting, the cost of failure greater than ever. Those who insist on the potential for a large-scale, populist movement to bring about significant change often point to the first Earth Day, when 20 million people took the streets and brought about the passage of the Clean Air Act, the Clean Water Act, the Endangered Species Act, not to mention the formation of the U.S. Environmental Protection Agency. A successful climate movement, at this point in the game, will have to accomplish even more.

"No one activity, even if you have a billion people marching, is going to change something as big and complicated as climate or the policies of the governments of the world," concedes Leslie Cagan, the national march coordinator. The organizers say they intend for Sunday to be a turning point for the climate movement rather than for climate change itself. Their slogan echoes that sentiment: “To change everything, we need everyone.” A successful march, so far as success can be defined, will show that everyone's on board.

But on board for what, exactly? The event's leaders made a conscious decision not to list specific demands, aside from the big one: the demand that the world take action. A protest, by definition, says that we haven't given up, and acknowledges that there's still time for meaningful action. But that time is running out quickly. Experts agree that the time for incremental progress has passed, and stress that the coming decades -- as well as the next 15 months leading up to the global climate negotiations in Paris -- will prove critical. When protestors demand action, this is what needs to happen:

Leave fossil fuels in the ground -- all of them

Actually, we really can't afford to burn even some of our remaining fossil fuels. Analysts at accounting giant PricewaterhouseCoopers (not your typical treehuggers) took a hard look at the numbers, and determined that "heroic steps" are going to be needed to get us back on track. Incredibly, they say the world will need to decarbonize by 6.2 percent every year until the end of the century just to limit warming to 3.6 degrees. (Just so you understand what a major challenge that is, we only managed 1.2 percent in 2013.) For the G20 nations, that will mean nearly halving our emissions by 2050. It's becoming increasingly clear that natural gas has to go, too. Writing in Mother Jones, Bill McKibben made a comprehensive case against the plan to substitute shale gas for coal, arguing that the so-called solution might be worse than the original problem. Methane, which escapes into the atmosphere when the industry drills for natural gas, is a greenhouse gas like CO2, except it's even worse for the climate. And although researchers disagree on how much of it's escaping, we do know that the fracking industry is moving too quickly for regulators to keep up. It's a risk we can't afford to take. And while it's nice to think of natural gas as a "bridge fuel," we don't really have time for that, either. "If we're replacing coal with gas," McKibben argues, "it means we're not replacing it with something else."

Invest in a worldwide "energiewende"

Subsidies for fossil fuels have grown 45 percent under President Obama's "all-of-the-above energy" strategy; worldwide, they're estimated to top $600 billion. Renewable energy, in comparison, gets a measly $100 billion in government support.

Our priorities, just as we've seen with natural gas, are clearly misplaced: a coalition of green groups called b.s. on the president's policy last January, arguing it undermines the progress that's been made so far and that it keeps us from prioritizing the real clean energy solutions that are badly needed. The fossil fuel divestment movement recognizes that as well, and argues that by taking money away from polluting industries and redirecting it toward renewables, then businesses, universities and non-profits can help jump-start the energy revolution.

We also need a good word for the revolution from fossil fuels to renewables, and the Germans, as they're wont to do, have come up with it. "Energiewende" (pronounced in-ur-GEE-vend-uh, translates to "energy turn") is not at all painless, but Germany, which is close to getting 30 percent of its power from renewable sources, is showing that it can be done (although its opposition to nuclear power is complicating things). Chinese manufacturers of wind turbines and solar panels are entering the market, the New York Times reports, “driving down costs faster than almost anyone thought possible just a few years ago." And despite dealing with some major stumbling blocks, according to the Times, the public doesn't want the government to scale back -- they're demanding, instead, that they find a way to speed the transition up. In other words, they're all in. The rest of us need to be, too.

Get China on board

There's little chance China's going to get a People's March of its own, but the climate movement can't succeed unless its leaders can be convinced to join in. Because as those opposed to U.S. climate action are all too eager to point out, the country does matter -- a lot.

But even though its president won't be attending next week's U.N. climate summit, China isn't necessarily the lost cause many make it out to be. Instead, as Jeff Goodell convincingly argues in Rolling Stone, it could be one of the climate movement's greatest opportunities. China, after all, wants to reduce its reliance on coal, the impacts of which it is already seeing in its air and soil quality, not to mention in extreme weather events linked to climate change.

And ironically enough, Goodell argues, it's China's quickly growing demand for energy that presents us with a solution: "Energy demand is expected to double by 2030, and at that pace, there is not enough oil, coal and gas in the world to keep their economy humming," he writes. "So China's ongoing energy security depends on the nation developing alternative energy sources in a big way." Renewables already make up 20 percent of China's energy mix, and the country's the world's largest producer of wind turbines and solar panels. Natural gas, going back to McKibben, might be better than coal in this context, but renewables would be even better -- and the opportunity to develop them is there.

A major report released earlier this week make this tantalizing promise: we can fix the world's climate while growing its economy. But the next 15 years are key. Again, we need to take advantage of the falling prices for renewable energy and stop subsidizing fossil fuels. During that time, the report finds, it's also critical that each power station we build, or city we design, make the most of green tech while adhering to the highest standards of energy efficiency. Each new piece of infrastructure that fails to do that leaves us locked in to high carbon emissions for decades.

Government leadership, the report's authors stress, is critical for making this win-win happen. They recommend putting a price on carbon, working to end deforestation while restoring the forests we've already lost, modernizing agriculture and banning new coal-fired power plants. "We need a structural transformation in the global economy," said Ban Ki-moon at the report's release, just a week before the U.N. climate summit. "This report argues for a new model where economic growth and climate action are mutually reinforcing -- and it shows how we can build it."

A successful climate movement won't settle for anything less.