Don't hate me because I'm not beautiful

After a career in cosmetics, I'm tired of telling women they're not good enough exactly the way they are 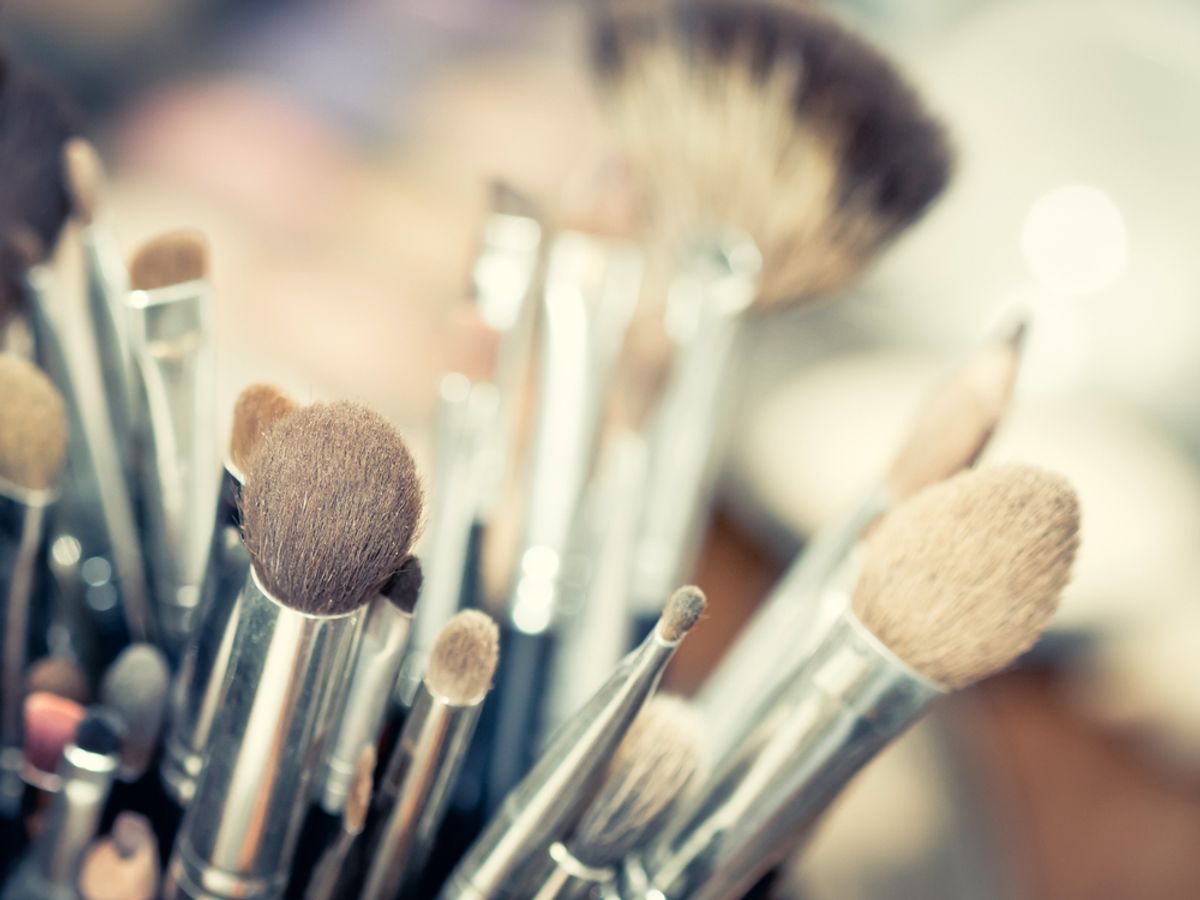 Like most women, I tend to obsess unhealthily about my looks. Every night as I wash the day off my face, I inspect every pore and crease for minuscule signs of aging. And I flinch when faced with those nearly imperceptible reminders that according to our youth obsessed culture, I’m nanoseconds away from irrelevance. Unlike most women though, I sometimes wonder if I’m partially to blame for our collective insecurity with our looks.

Much of my career has been spent in and around the cosmetics industry. I spent years toiling in the beauty biz, first as a celebrity makeup artist, then as a marketing strategist for major brands and celebrities. I created and launched some of the first beauty websites and online magazines, and wrote a book—Hello Gorgeous! Beauty Products in America ’40s–’60s—about beauty advertising in the mid twentieth century. I’ve taught cosmetics and fragrance marketing on the graduate level to executives from every major cosmetic brand you can imagine. I lecture at the annual gathering of cosmetic chemists. And while I always strive to put forth a lesson of empowerment through women’s spending power and the choice to gently enhance ones looks and confidence, somehow I wonder if I just added to the problem. Because on some level, working in an industry that exists to tell women that they can be better or prettier, might somehow also be telling them that they’re not good enough exactly the way that they are.

More from DAME: "We Really Need to Boycott the NFl"

At the dawn of my career as a makeup artist, I was fortunate enough to apprentice with one of the industry greats, and man did I learn some dazzling skills. For the purposes of this essay, I’ll call him "James." He’s gone now, but when he was at his peak, James was the only artist many A-Listers would allow to touch their faces. In their eyes, he had almost shamanic powers to transform them from ordinary to near-mythic visions of loveliness. Because James fed off the idea of being a legend, he created a complicated public and duplicitous private relationship with his clients—and yet all of them were unquestioningly thrilled with his work.

While James was indeed adept with a blush brush, and wielded a magic mascara wand, it was his words that most affected and transformed his clientele. He’d coddle them gently at first, exposing their bare faces to the bright makeup-mirror lights, telling them not to be ashamed of their giant noses, thinning lips, or visible wrinkles. I’d watch in fascinated horror as James would gently stroke their hair as he promised to create the illusion of cheekbones where he claimed there were only unsightly pockets of fat. This genius of a makeup artist would reduce his single-named female powerhouse clients to weeping masses who were totally unhappy with nearly every element of their probably-perfect faces. In that way, when James added a bit of contour or shimmer, his clients thought him a genius and were desperately grateful to no longer be seen as hideous.

More from Dame: "Dear Julie: Advice About a Too-Spendy Friend and a Selfish Couch Surfer"

Despite those early lessons, my own work as a makeup artist was to make women feel more beautiful. At the very least, I tried to ensure that the women I worked with were less critical of the face looking back at them in the mirror. And to this day, I have a hard time defining what true beauty is. When I look at someone’s face, I laser-focus on their finest features and the rest blurs away. So for the most part, I can see beauty in nearly everyone. And I continue that message through my work in the various aspects of the beauty industry and in my writing. Or at least I try.

I think a lot about the idea that most women I know loathe much of their bodies or faces. Healthy. Ordinary. Fat. Thin. Beautiful. The self-loathing is nearly palpable and, of course, depressing. The insecurity over real or imagined lumps and bumps or blemishes can temper even their most triumphant moments. And I wonder about how much is innate in the combination of rogue X's and Y's or how much we learn societally and from our families or peers. When I hear my friends complain about their laugh lines making them look old, I usually respond “No. They only prove that you’ve had a lot of joy and laughter in your life.” If only I heeded my own response with regard to my face and my laugh lines.

I wonder when insecurity became one of the hallmarks of modern femininity. I wonder when we stopped being confident and fearless young girls and became desperate for the approval of the advertising and cosmetics industry to validate our faces.

I used to pore endlessly over fashion magazines. I was obsessed with fashion and the women chosen to represent the beauty ideal. And then I began to delve backward, studying the evolving ideals of feminine beauty of the past, and saw that women were always told to be something they weren’t. The Rubens-esque ideal bullied women into being fleshy if they were too thin. The flapper prototype paved the way for Twiggy and so-called Heroin Chic and our own era’s obsession with protruding hip bones and clavicles. In a world that can manufacture and refine beauty with airbrushing or scalpels, how can the average woman learn to accept, much less love her imperfect face? And when does the beauty industry simply become the precursor for the voracious plastic-surgery industry? A small change pushing for a larger one.  A swipe of lipstick giving way to a painful injection.

More from DAME: "How Do you Talk to Your Kids About Scary News?"

Earlier this summer, the French supermarket chain Intermarche launched a campaign called "Inglorious Fruits and Vegetables." In their hopes of educating consumers and reducing waste, the stores publicized and greatly reduced the price of imperfect produce. Two-branched carrots, misshapen potatoes, or gnarly apples were proudly displayed on store shelves. Then delicious juices, salads, and soups were prepared and they gave taste tests. As you might guess, the end results were identical. But how many times do we find ourselves rejecting a slightly bruised banana in favor of the one in the perfect yellow peel? And if we have a hard time accepting funny-looking carrots and potatoes, how do we ever expect to have a culture that accepts all sizes, shapes, and faces as beautiful in their way?

While researching my new book Ancient Prayer: Channeling Your Faith 365 Days of the Year, I became intrigued with the customs and grooming habits of the women of biblical times. While beauty was still an ideal, the descriptors were entirely different. Biblical women from Esther to Naomi to Yael were praised for their leadership qualities, cunning, loyalty, and wit. And when their beauty was described, the terms were frequently more esoteric and focusing on the strength exhibited and natural charm. Beautiful skin, hair, and eyes existed, but those weren’t the basis of their beauty. How is it possible that texts dating back thousands of years could have a more modern approach to a woman’s beauty ideal?

I live in a very culturally varied neighborhood in my native borough of Brooklyn. And I see women from different backgrounds covering or exposing different parts of themselves depending on the seasons or styles. The more secular ones proudly offering a glimpse of thigh or cleavage or tinted lips or hair. The deeply religious ones shrouded in hijabs or burqas or headscarves or wigs. Coverings imposed on them by the men of their faith. Their appearances determined by others. Their ideals of beauty, decided by the men claiming to represent a higher power; in many ways nearly identical to the earliest days of the snake-oil salesman at the infancy of the cosmetics industry. But back then change came around when Madame C.J. Walker created a vast empire around her line of haircare and cosmetics for black women. And then the grande dames of the industry Elizabeth Arden and Helena Rubenstein and Estee Lauder created multimillion-dollar businesses based on giving women the products that they themselves used and had cooked up in their own kitchens.

But somewhere along the line, giving women what they want has become a fight to make them think they’d be better as something else entirely. I’m not sure there’s an easy answer for fixing what’s broken in the cosmetics and advertising industries. Some women argue against terms like “anti-aging,” claiming it turns the clock into the enemy. Others embrace the advanced technologies as empowering and life changing.

There’s the old adage that when faced with a trend or politician or campaign that doesn’t serve you well, you vote with your feet. Perhaps we can start to individually support companies and products that accept our own quests for beauty without diminishing the women we’ve fought so hard to become. Perhaps it’s time to vote with our own perfectly pedicured toes by not rejecting the quest for a way to feel better or prettier, but rather absolving ourselves of the need to conform to someone else’s idea or ideal of what better or prettier actually means.